“Follow the money.” It’s a slogan that’s true in pretty much any walk of life, including the mobile world. If developers are keeping this rule in mind, then the recent announcements regarding purchases and payments in the Ovi Store should have them very excited. What’s on offer is by far the best deal for developers in terms of major App Stores.

While the basic 70%/30% split on income from sales made which is offer is pretty much the industry standard, Nokia’s Ovi Store builds on one of Nokia’s strengths – that of scale. The figures out there for the number of smartphones in use, even if you look at just the 5th Edition numbers, makes for a huge slice of pie.

Nokia allow developers to sell their software to a huge number of countries, with roughly 170 countries able to offer credit card billing. That’s a huge step up when compared to the Android and iPhone marketplaces, and means that if your app can be downloaded, it’s very likely that you’ll be able to sell your application to them.

But it’s not the simple raw number of regular store support that’s exciting. The twin prongs of Operator Billing and In App Purchases are going to make for a very sticky and profitable experience.

Putting it on the monthly bill

Let’s start with operator billing. Instead of supplying credit card details, users can elect to have the cost of an application downloaded from the Ovi Store appear instead on their monthly bill. This reduces the friction on the sale (i.e.  people are more likely to buy) and means that like for like, Operator Billing will result in more sales of an application.

Operator Billing is available on 91 operators covering 27 countries. Up until the end of September, money was split in the same 70/30 split between Nokia and the developer (the smaller split staying with Nokia), but importantly this was after the operators had taken their slice – a slice that changed depending on the operator that facilitated the sale.

Unpredictability is not something Nokia want in the Ovi Store for their developers, so from October 1st there’ll be a rationalisation in Operator Billing. While the split is now down to 60/40 in favour of the developer, that split will now be on the gross, i.e. before the operators took their cut - Nokia will pay the operator fee out of their balance (and it wouldn’t surprise me if that sees Nokia making very little profit, or even a loss, in many cases). 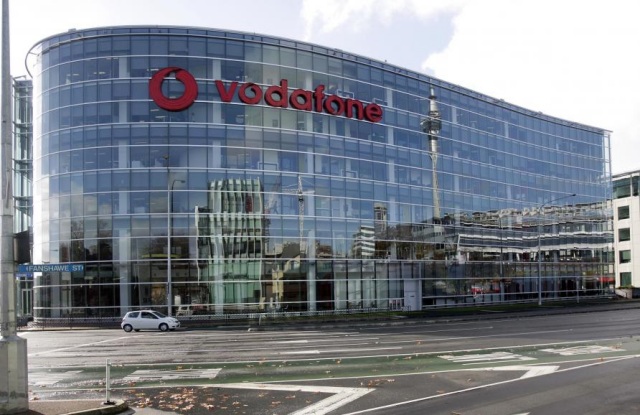 But it provides predictability to the developer, and makes auditing their sales that much easier. It takes a lot of mystery out of the question of what you’ll be earning via a network sale, and the developers can focus on making their applications and counting the units sold rather than keeping an eye on every network and their different percentages and sales. It’s all just one flat percentage.

While it is a lower cut, reports are that Operator Billing is generating a lot more sales when compared to credit card billing in the Ovi Store. So slightly less per unit, but more units sold. I think that’s fair in the software market of today. Nokia’s expectation is that developer revenue will rise around 50% using this method.

Don’t forget that Nokia already has hard data on this, both in a number of territories with the current Ovi Store but also the two iterations of the N-Gage Store which also had operator billing. So they know the difference in sales that this option can make.

Never having to leave the application

But what’s going to make a huge difference is the presence of in-app billing for developers. The user never leaves the application, but all the handling, accounting and billing is taken care of by the same mechanism as purchasing an application.

A simple case, but one that I would hope that everyone uses, is in the “lite” applications that make up a huge part of any online stores. (In the old days we would have called them demos). The catch in these was you had to get the user to think “I’ll buy this", then get them into the Ovi Store, then hit the purchase button, then download another applicaiton, then perhaps copy over data, preferences and other settings to the 'full' version.

That’s not easy. Present them with a button in the application that says “unlock all features” that needs just a touch (and a confirmation if it’s a competent UI) and you don’t have any more downloads, no need to jump back to the Ovi Store, and by making it simpler, the conversion rate from lite/demo to full app is likely to be a lot higher – there’s a lot of evidence from other marketplaces that adding in “full purchase” in a demo leads to more sales.

There’s another angle as well, and that’s purchasing items to augment an application This could be an additional module in an office application (e.g.  adding in PowerPoint support), increased storage for a cloud storage service could be purchased in the on-device client, or extra tools in a game (such as the announced Angry Birds super bird, the Mighty Eagle, which allows users to skip a level… if they pay up for the Eagle). 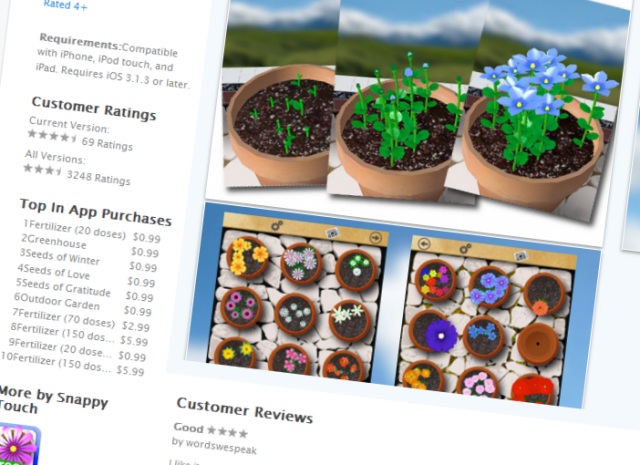 I’d urge anyone interested in using in-app purchasing to have a look at Noel Llopis’ blog post about his application, Flower Garden, and his transparent discussion of sales and in-app purchases. The raw numbers you should be interested is are: when it was a lite app, then head to the store to buy the app, he was making around $50/day. Adding in-app purchases for more fertiliser, and to upgrade to the full app from the lite app, saw a jump to around $180/day in revenue.

(Oh and Flower Garden is for the iPhone. I asked Noel why it was only for the Apple device back in July this year. The reasoning was he didn’t consider other platforms to be a strong market and his reliance on some of Apple’s custom API’s. Nokia should be making life as easy as possible for developers like Llopis to make the jump – but that’s for another day and another discussion).

Of course add together operator billing and in-app purchasing and you have a very attractive package for developers looking to make money from well thought applications. That's a powerful 1-2 right there.

Both of these areas were not easy to implement, and neither will they be easy to manage over the next few months. But the Ovi store is a very serious plank in the current Symbian story taking place within Nokia, and their commitment to provide the best platform for developers to share their software and make money should be evident.

Alongside the move to Qt and Web Runtime, making the act of developing far easier than bespoke Symbian C++ code, the additions to the Ovi Store (which go live at the start of October) should mean that anyone doing serious research into their choice of platform and the infrastructure behind the platforms can’t discount the Ovi Store on the strength of some heresay web discussion for two years ago. Just as Symbian^3 is maturing and hitting the marketplace, so is the Ovi Store.