Risk, Diplomacy and a touch of turn based strategy are all in this classic game from Inscenic. 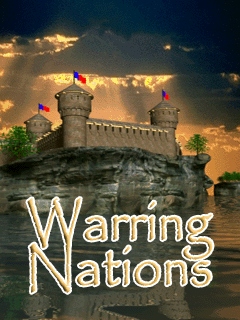 So I’ve been looking at Warring Nations, from Inscenic. And excuse me while become Inspector Gadget for a second.

What we have here is a turn based strategy game. I know that the fashion in these strategy games nowadays is to do real time strategy (where every player and game AI moves at the same time, concurrently) but there’s something more pure about turn based gameplay (and also the fact that it’s much easier to leave a turn based game while you do another task, like answer the phone, or go to sleep).

The strengths of Warring Nations are two fold. The first is that it is very much a traditional take on this style of game. You start with a single territory under your control, and on that you have a single castle. As do the other players in the game.

These players can be either computer controlled (up to 4 other players on the initial map, although others have higher limits), or controlled by one or two users. The second human player is in a hot seat mode – basically you pass your smartphone around to the next player and the code makes sure that you don’t see any information you shouldn’t.

You gather taxes from the land, you build castles, armies and equipment. You can talk to other players and, through diplomacy, gang up on other players, or just trick them into lowering their defences and then stab them in the back. It’s all available, but one thing is a must. Read the manual. It’s available from the developer web site as a Microsoft Word file (or a Microsoft Ebook – shame there’s no universal PDF version). It explains all the variables and all your options. And there are a lot of them. 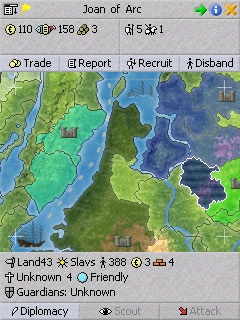 This is the charm of the title though; all these options are exactly what a gamer would expect in a genre title like this. And the interface on the 240 x 320 pixel UIQ 3 screen might have a lot of tiny icons and writing, but it all remains both incredibly clear and easy to use – even more surprising when you realise the entire game is driven by stylus input. There’s a consistent look and feel to all the menus, it’s easy to buy and sell goods, attack other territories and build up your fortifications.

Part of this is because of the second strength of the game. It’s not brand new. Pocket PC and Palm OS owners have had Warring Nations for many a year, and slowly watched it develop. This means that UIQ owners can jump straight into a game that has been play tested, balanced and tweaked into an efficient and worthwhile title.

I am more worried about how it turns UIQ from a multi-tasking device into a single tasking one. When playing Warring Nations I couldn't see a way to jump back to the home screen - even the back key on the W950i did nothing. It does pop up the dialog for an incoming call, but if there are game calculations going on in the background then even repeated taps on the 'Answer Call' button will not be acknowledged until Warring Nations wants it to be. Bad form, and that drops the score down quite a bit.

In addition (and this is true for all strategy games), you’re going to need to invest quite a bit of time into the game to make it worthwhile. There’s no tutorial mode, and even if there was then you’re still going to need to work out your own favoured way of progressing through the game. And this is where being so traditional is an advantage. If you are a strategy buff, you’ll be familiar with the elements used, and will be able to hook into your mental database of tricks, traps and tips. For those of you new to the genre - well, this is going to be a steep learning curve.

I’m one of those buffs though, and Warring Nations felt incredibly comfortable to me. It’s intuitive, provides a great challenge, and there’s a wealth of options and alterations you can make that keeps the game fresh and keeps me wanting to come back for more. It’s still clearly a game designed for a mobile device rather than a home PC or console, and there's nothing radically new to it, but what there is should provide a strong enough game for all. 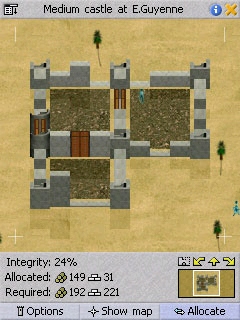 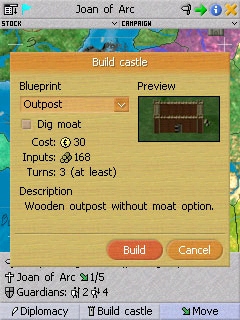