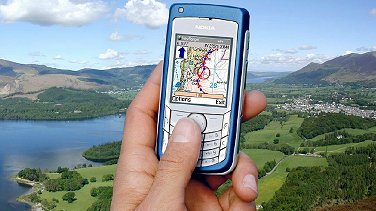 We may be geeks to the unitiated, but smartphone owners have a life too. And we're as likely to want to spend time out 'en plein air' as the next person. The GPS navigation utility scene is already pretty crowded, but ViewRanger is something very different, both in terms of its aims and its coverage and programming.

Now, you'll know all about the likes of Route 66 and TomTom Mobile 5 for road users, with hand-holding directions, Points Of Interest, 3D views, and so on. Although the analogy isn't 100% exact, I'd liken ViewRanger as the equivalent for anybody not on a road. So that's hill-walkers, cyclists, hikers, and so on. There are plenty of programs to liase with your Bluetooth GPS and report position, speed and even to log your progress as a 'track', but ViewRanger does this and a huge amount more.

There's a natural focus on areas of natural interest, but I live in Reading, UK, so you'll be able to see that I couldn't do much with the application without travelling hundreds of miles - and I'm not due to do that until the summer. In addition, the functionality in ViewRanger is overwhelming at times. And for both of these reasons you should treat this review as more of a 'preview'. At the very least, it'll give you a flavour of the application and encourage you to grab the 5 day trial version for yourself.

There are two basic modes, 'map' and 'panorama'. 'Map' is the self-explanatory one, with top quality Ordnance Survey maps, into which you can zoom and all lockable to your GPS signal. So, effectively a top-down moving map, wherever you are in Great Britain. The refresh rate is good and, provided you've bought the full GB map version (or are using the zoomed out mini-map) you'll always know where you are, whether on or off road. A read-out of the National Grid Reference is handy, for communicating your position to others. 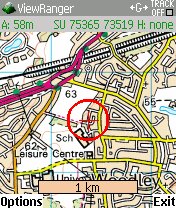 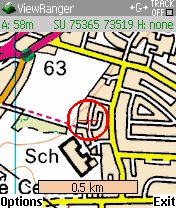 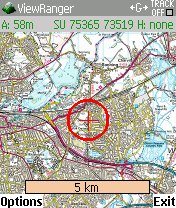 So far so good, although unremarkable. What sets ViewRanger apart is its panorama mode. Use the menu function (or, better, press the '0' key - you'll find handy keypad shortcuts like this liberally spread throughout ViewRanger) and you'll see a simulated view of the scenery around you. A compass readout at the bottom of the screen shows you the direction being simulated and pressing left and right on the navigator key swings the view round. This 3D view isn't just a gimmick, it's used as a basis for annotating the panorama with the names of natural features such as hills, lakes and forests. The idea being that you can be walking across the moors and be able to name all the features you can see in all directions, matching up the on-screen representation with the real world in front of your eyes. 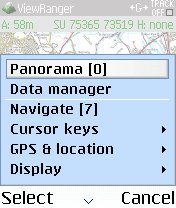 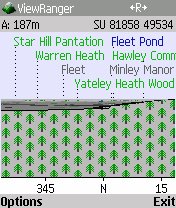 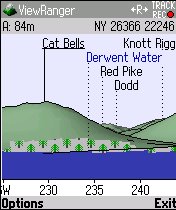 The system works surprisingly well, although if (like me) you live in a flat and wide valley then there won't be much to see by way of contours. Still, it's easy enough to scroll around the map and tour the 'virtual' GB, looking at the viewpoint from any position, in any direction. Despite the fairly simple graphics, ViewRanger works well in panorama mode, with filters (layers) that can be toggled on and off ('Settlement', 'Water', 'Hill', etc.) and 'shading', providing the realistic 3D view shown above. 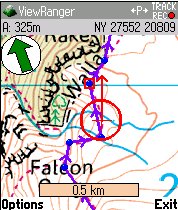 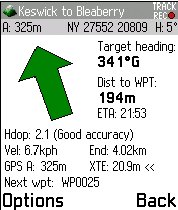 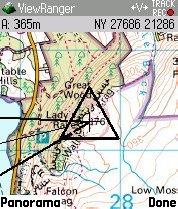 As with all GPS-aware applications, you can mark specific locations and record your movements, exporting them to GPX or LOC files, for import into other navigation systems, and navigating back to waypoints later on. ViewRanger goes several steps further though, allowing you to associate images and text notes (with optional web hyperlinks) to specific locations, as shown below. This would be a cool feature when used standalone, but it has the potential to be even greater when used with ViewRanger's free online account system, where your images and notes are shared with other ViewRanger users around the country. With a big enough user base, you'd (in theory) have enormous fun following the walks and treks done by others, reading their notes and viewing their images. And they could be doing the same with yours, of course. And all the while you'd both be in the fresh air, getting fit!

My only (minor) complaint is that ViewRanger's menu system is a little cluttered, with around 40 different menu and sub-menu options, depending on which mode you're in. But in truth most of the menu functions are there because they match up to functions in the software. Shortcuts abound to the most common menu functions, although it'll take a while before they get burned into your subconscious. Still, ViewRanger is the sort of application that gets used intensively, your all-encompassing companion on those long hikes across the fells, so you'll soon get used to what it can do. Your biggest problem will be keeping your smartphone charged up (I've been trying out various solar charging options - but that's the subject for another review, another day)...

Listen up. The usual procedure for reviewing an application involves lots of to-ing and fro-ing between ourselves and the developers, working out which bugs are easily fixed and which ones are show-stoppers that need to be written about. There was only one problem with ViewRanger, in that it wouldn't initially connect to my TomTom GPS, but this was fixed in an hour or so and there have been no other issues whatsoever. The program simply works. Kudos also to Augmentra for producing the ViewRanger package in several relevant versions. You can opt (depending on where you live) for the Lake District, the Peak District or Snowdonia, or, if you're feeling energetic, go for their 'GB Nation Parks' compilation. There's a full GB version, but it's seven times the price, almost certainly due to licensing costs from Ordnance Survey.

You'll notice the score of 89%. 90-plus would have placed it in must-have territory, but it falls short for the obvious reason that many of us probably won't ever need it. BUT - if you live within striking distance of some of the spectacular regions covered and love walking or mountain-biking (for example), ViewRanger is certainly a must, you'll hopefully be just as impressed as I was.