Vector Blaster is a great example of what part time developers can do with the platform. Definitly recommended for all classic gamers. 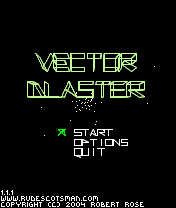 Remember I was talking about being careful when updating classic games in my Powerball review? Well here comes Robert Rose (the self titled Rude Scotsman) with an update of Atari's Classic Coin-up, Tempest.

The Tempest was one of Atari's glorious Vector Graphic Games. That means that all the graphics were simple lines, but these could be thrown aroudn the screen with immense speed. And remember this was back in 1980. So straight away Vector Blaster gets a massive thumbs up purely because the graphics are pure vectors, there's no 'improvements' or 're-imaginings' here. Technically it's not as impressive as the graphcis that get spun on the screen in something like Red Faction or Tony Hawk Pro Skater on the N-Gage, but it just feels cleaner, faster, and more accomplished. 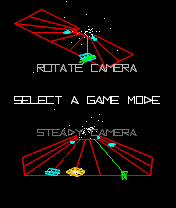 Vector Blaster has you stuck in a nightmare. you're looking into (down?) a line grid, and there are enemies, mutants, powerups, mines and other such arcade like beasties coming towards (climbing up to) you.

Going back to Powerball for a second, it had one slight niggle in its control system. The controls woudl become 'reveresed' when the bat was on the top of the circular screen. The same can happen in Vector Blaster when playing with a tube that goes over the top. At least it will if you are playing in 'fixed' camera mode. Because you can switch to a 'floating' camera mode that keeps your gun turret in the same 'six o'clock low' position on the screen and spins the tube around you. 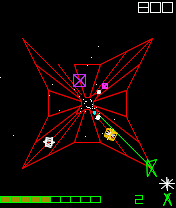 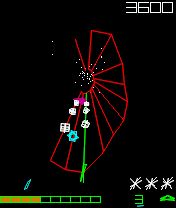 There's the usual range of power ups here, including dual and triple shot laser guns, so you can cover more than one lane of enemy traffic. And with 'faster shots' extra lives and more energy all available in the green power up boxes, you'll be looking out for these all the time. But (typically for an arcade game) you'll need to choose to grab these power ups while possibly letting an enemy reach the top of the grid. And when that happens, bang goes some more energy. And you don't want to run out. 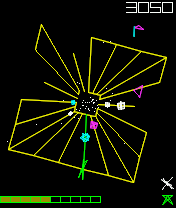 Vector Blaster looks old school, and plays old school The first few levels have a gentle curve, but it starts getting a bit hairy at level 4. As you proceed, the different levels of the game become more awkward, and 'mines' start appearing that are impervious to your bullets, requiring you o take avoiding action - while still shooting everything else down. From calm and colelcted, to mad panic. That's the sign of a good game, and Vector Blaster is a good game.

Available for both Series 60 and UIQ machines (and Pocket PC and MS Smartphone, but we'll let that get a quie mention and no more), Vector Blaster is a great example of what part time developers can do with the platform. Definitly recommended for all classic gamers, and I look forward to more games of this quality from Robert.