"High ho, high ho, it's off to Finland we go..." Time to get down the mines with Infinite Dream's Super Miners. 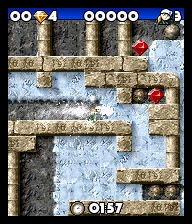 It’s nice when things evolve - after all, would we all still want to be using 7650’s? … Dad, settle down, you don’t count. And as the phones move forward, so does the software. And it’s great to see that applications and games are continuing to be developed and recompiled to run on the latest phones. I’ve already looked at “Super Miners” on the N-Gage and UIQ devices, so with the new builds running on the E61 (and other 3rd Edition devices) it was time to revisit it.

The game itself is in the classic genre that has you running around the game world collecting precious objects (in this case a number of different jewels). Getting in your way are the boulders held up precariously by the dirt you have to dig through to get to the jewels. Plan your digging well, and riches (along with the next level) can be yours. Dig the wrong area, let the wrong boulder fall, and at best your route will be blocked and you’ll need to start again – or worse, you’ll be buried in an avalanche of granite and squished as flat as a mini-SD card.

That’s not the only problem you’ll have. You’re going to have to worry about the inhabitants of the mines who don’t take kindly to their jewels being stolen. So don’t go near them. Try pushing a boulder off a pile of dirt so it falls on their head, both killing them, and sometimes releasing the jewels they are carrying. Each mine is portrayed in a side-on view, so you can see what gravity is going to do to you – and you’ll find your rocket pack a great aid to moving around the dizzy heights of the mine. 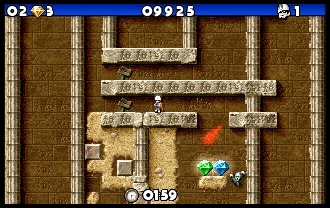 What I like about Super Miners is that the bits and pieces surrounding the game are both well thought out and incredibly easy to navigate. From the opening splash screen to the crisp sound effects and well laid out preference screen, the application's incredibly easy to navigate. I also like the decision to not scale up the graphics from the original graphics. The smaller screened N-Gage device suffered from not having a huge amount of information on the screen, leaving you at a disadvantage when planning a level. The new high resolution screens mean this is less of a problem. 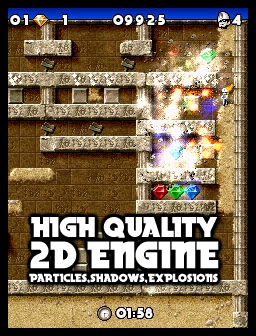 Super Miners feels polished and loved. There’s a very fine eye looking at all the details around the game – and the game play mechanics and difficulty levels have had the same care taken with them. People talk about the ambience a game can create around a simple idea. Super Miners is a perfect example of this. It’s a title I would use to show off the machine to interested people as to what a good game on mobiles should be.

A quick note about the screenshots - the screenshot app we use isn't working with this game, so there are no E61 shots here - but even over multiple platforms, Infinite Dreams have kept the same look, size and UI in the latest version... as you can see...