It's a word puzzle game with a touch of strategy. Ewan breaks out his spellchecker to investigate. 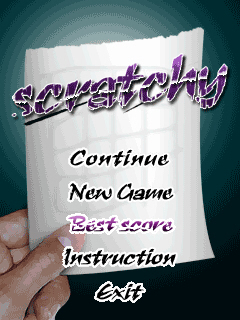 Word puzzles are thin on the ground in the mobile space, so Fivedeer's new word finding game is a welcome addition to their leisure applications. The Java-based Scratchy may well mix up the metaphors of scratch cards and Scrabble, but it does have a very nice game underneath the polished graphics.

Given a 4x4 grid of letters, your simple goal is to make the longest word possible. No time limits, no nasty creatures or pressure, just you and the letters. It’s a very sedate pace, yet the mechanics of the game actually add just enough pressure to make it worthwhile.

This is because of the letters – whenever you complete a word, those letters are ‘scratched out’ and replaced with new letters. The rest of the grid stays exactly as it was. If you’re stuck with some awkward letters, there’s no magic wand to clear them. And you are going to need to be careful in your choice of words, as Scratchy has a propensity to throw the letters used least at you. Prepare to think of lots of words with X, Z’s and J’s!

As with pretty much every word game, the dictionary of allowed words needs to be of significant size to ensure that what you come up with is going to be accepted. One of Scrathy’s big gaps seems to be in plurals, alas.

Obviously there isn’t an option to say “no, this really is a word”, but sometimes this can get frustrating because of the relatively limited number of words which you are sure should be in the database, but aren’t.

But if you can put these quirks aside, there are touches of strategy that lift up Scratchy from being just an anagram game. The first, obviously, is that longer words mean more tile exchanges, and more fresh letters, giving you better options. But if, on a grid, you can get three three letter words, this turns over 9 letters, and is better than one seven letter word.

You also have bonus tiles available. I love the bomb - if you use this tile in a word, all the other tiles around it explode and generate new letters. It’s almost as useful as a reset. Another is the clue tile, which you can collect and use to let the game suggest a word for you if you get stuck (and you also start off with three of these for every game). 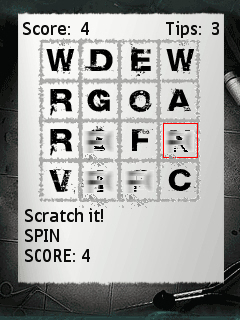 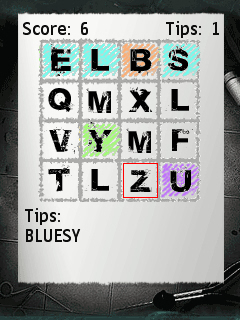 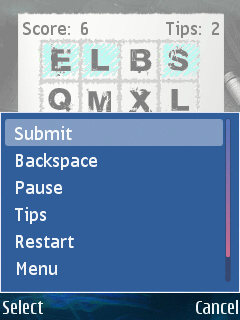 The tile graphics, while not requiring to be more than simple letters, have a delightful hand drawn style, and help the look of the game immensely.

Scratchy is nice. There’s no time limit, there’s no impending arcade death around the corner, but it’s intelligent, requires forward planning as well as a touch of luck in the letter distribution, and it’s keeping me engrossed while I’m traveling and queueing around America. Fivedeer have yet another title which is small, mobile, well coded, and recommended by myself.