Another week, another Herocraft review.

Robo has been around for a while now, in fact Herocraft had a Java version of the game long before the really polished Symbian release, so it was high time to give it a thorough look through my (admittedly) rose tinted glasses and share my impressions with the public.

Lets get the presentation over first – simply because there is nothing earth shattering to talk about. Herocraft deliver, as always, they bring their usual attention to graphics, music, features and control; multiple languages, a straightforward menu, detailed help and all the regular options to save/load the game or set the volume. The animations are all cute and well-drawn, from the several different standby-screens of the main character’s face if you leave him standing for a short time, his reflection in the mirrors or his slowly disappearing footsteps and varied environmental elements – no 3D magic and unnecessary particle effects to distract you from your simple goal of finding the exit and reaching it in one piece. 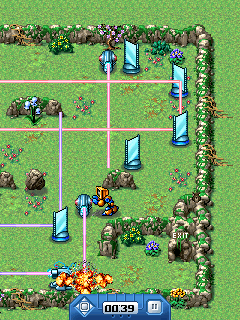 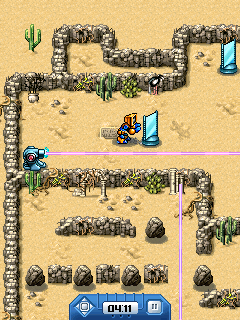 There is also a statutory background story but it doesn’t really add anything to the experience, so lets just say you lose nothing by skipping it. In nutshell for those who need to know everything: You control Robo, whose mission is to find his true love Eny, who happened to be kidnapped by the evil Discharger (yeah, yeah - Ed). His journey takes him through 76 rooms, filled with laser beams, in 4 different worlds. He has only 3 different items at his disposal to clear his way to the exit without being burnt by wicked beams, which can be blocked by stones or deflected by mirrors while bombs can be pushed in their way to blow up the laser cannons or any other obstacle.

It is as simple as it sounds – that is exactly why there is no need for levels after level to lead you into the game - after the second map you already know everything there is to know. The best part is – obviously – the puzzles. You never get the feeling that a map has been put there just to fill a gap between two other levels, they are all just as challenging as they need to be to keep you going. Of course, there will plenty of maps that will make you want to throw your phone as far as possible but the real beauty of this game is that every level can be solved by logical thinking, so if you get stuck, there is no one else to blame but you :)

There are no real hints you can be given without destroying the pleasure of finding the solution for a certain maze yourself, but here are some notes to ease the pain during your first few steps:
- since you can do nothing but walk around with Robo and push stuff it can be useful to have a look at the whole map before you start (ad hoc) rearranging everything; pressing the centre of your joystick will switch functions for the directional buttons from moving Robo to looking around the map and back
- diverting beams from one laser cannon to another will make both cannons explode
- don’t forget that you can enter the ‘Exit’ from any of the four directions not just from the bottom as one might think based on the drawing. 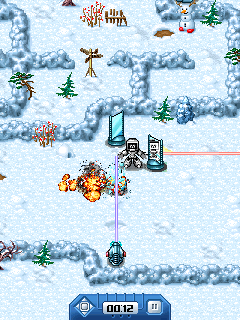 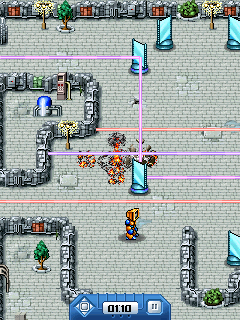 I personally prefer games like this, with a defined set of levels or maps, to those with infinite variations of randomly generated challenges. It feels more rewarding to head somewhere, knowing how long your journey is going to be before you reach your well deserved “Congratulations screen”.  I don’t want to stop playing a game because I got tired of it but because I finished it. This way, my last experience is one of fulfilment rather than one shadowed with the disappointment of not being able to beat the top score for the umpteenth time.

Plus these levels were created by another person, so by solving a certain problem you (sort of) beat a living human being who actually knows how difficult that particular challenge was, and not just a random generator. If you share this view then you will most certainly have a great time going through all 76 maps of puzzling – and end up wishing for downloadable level packs and a map editor like I did.

Robo has a well deserved place in the Top 5 list in its genre and it's very easy to appreciate the thought and care that was put into the game. As always – feel free to give the trial version a test drive!