Quartz 2 is a smartphone puzzle game, which is one of the most competitive genres in gaming. Does Quartz 2 manage to make itself stand out from the crowd? Find out by reading AAS's review of the S60 3rd Edition version. 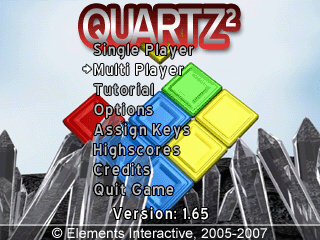 Quartz 2 is the sequel to the popular smartphone puzzle game Quartz. As in the original, the game involves dropping coloured blocks next to each other within a large diamond, with the aim of getting four or more same-coloured blocks next to each other. These neighbouring groups disappear, and when all the blocks in the diamond have disappeared you move up to the next level.

The situation is complicated by various special blocks such as nukes (that explode when next to a same-coloured group of four or more), dead blocks (which cannot be removed directly, and only disappear when next to a group) and others. Even worse is a red bar that builds up each time you fail to make a group. When this bar reaches its limit, it drops lots of dead blocks into the diamond.

The controls of Quartz 2 are very simple, you use the direction pad to move the block left and right, click on the d-pad's button to drop, and click on one of the blue soft keys to switch between two upcoming blocks. The game does not require the keypad at all.

There are several game modes:

- Standard: The gameplay is as described above. You can take as long as you want to make a move, so the game has a slower, more tactical feel.

- Timed: The same as standard, but the red bar fills up over time whether or not you make a move. This makes the gameplay more frantic and you can't really plan anything that carefully.

- Multi Player: Probably the most exciting game mode, this can actually be played by a single player (against up to three computer-controlled opponents) or against up to three real people with Bluetooth devices and Quartz 2. The gameplay is basically the same as standard mode, but there's no red bar and every time you make a group or combination of groups, dead blocks start dropping into your opponents' diamonds. The winner is the first to get to a pre-arranged score. The Bluetooth mode is multiplatform, so for example someone with a Symbian device could play a game against someone with a Windows Mobile device, as long as both people have Quartz 2 installed.

Quartz 2 also includes a well-written animated tutorial which shows you how to play the game. 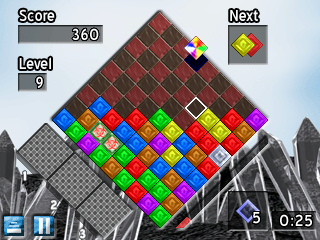 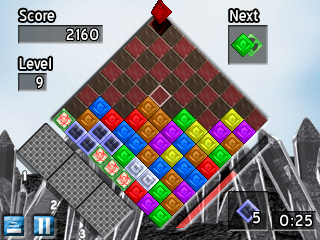 You can see a variety of special blocks here, including rainbows, biohazard and (behind the green block on Next) a nuke block.

Quartz 2 has a clear, crisp and slick look. The graphics are completely practical, there's absolutely no doubt about where a block is going to land, and the colours of the blocks stand out against the dark background. The special blocks are also very distinctive and easy to tell apart.

One thing especially worth noting is that there's a mode for colour-blind people, which works by numbering each colour so you're matching figures rather than colours (the colours are also visible beneath the numbers, so there are still shade differences).

Sound is limited to a rolling piece of simple, sombre electronic music, as well as the occasional effect for in-game events. It's all fairly subtle and avoids being annoying. 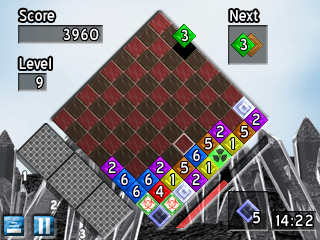 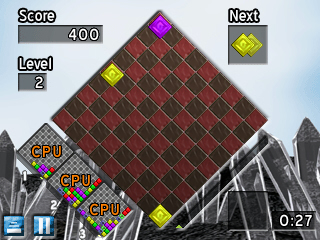 Quartz 2 works absolutely fine on a television screen, the graphics look sharp and colourful. The game also works fine with a Bluetooth keyboard, especially as you only need to press the arrow and soft keys.

Quartz 2 on a TV/keyboard setup looks and plays very much like a Megadrive or SNES game.

Quartz 2 is a very polished puzzle game, it's full of unnecessary little flourishes that make it stand out (for example, if you don't play a move the whole playing area shimmers colourfully). The interface design is excellent, and the game even goes to the trouble of permanently displaying the current time so you don't have to keep switching tasks. It's also one of the few colour-based games to take account of colour-blindness.

There are several very different game modes, and the multiplayer mode is fun even against the computer opponents. The game is a bit too easy on the first levels, but you can set it to start at a higher level so this isn't really a problem. The gameplay itself is easy to pick up, and the excellent built-in tutorial means that everyone who owns this game will be able to understand its subtleties.

Quartz 2 has been around for a while now, but it's still one of the slickest puzzle games available for smartphones. If you like this genre it's definitely worth giving it a try.

PS: You can see a gameplay video of Quartz 2 in action over on the Unofficial Nokia Gaming Blog.

The game reviewed here was the Symbian S60 3rd Edition version of Quartz 2. It was reviewed on a Nokia N93. The screenshots are taken from the horizontal QVGA version.

You can buy Quartz 2 for the following Symbian platforms, simply click on the appropriate platform to go to the purchase and download page: