Author: SomeOne / Another Guest 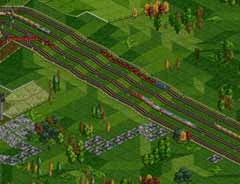 "SomeOne / Another Guest" is a well known name in the gaming circles of UIQ devices. With a strong line up of games, admittedly mostly reworking classic gaming titles in the legally grey area of abandonware, the titles are usually impressive, in-depth, and free. The latest release is his version of the "Transport Tycoon" simulator.

Starting in the year 1930, you have the wide open plains of the world, with cities, towns and factories scattered around. Using your limited initial funds (in this case $100,000), you have to build up transport links between all these points, and have the goods flowing across your country, be it on road, rail, sea or air. And being the kindly capitalistic chap that you are, you’ll be taking a small percentage of the value of all the goods transported through your system as a tariff. Use that for re-investment in the infrastructure to make your millions.

It’s the plot of many a sim/management game, but what makes it so special is that SomeOne has gone to the trouble of doing an almost perfect port of the original Transport Tycoon. This means that the legendary balance of the original game is present here. There’s nothing in this game that is unbalanced – by that I mean no one area is stronger or more beneficial than another. 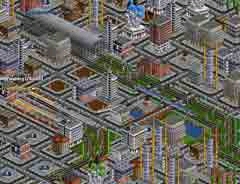 There are also challenges to drive you forward to create new routes and open up different areas on the map. Much like the US Government subsidised air travel with freight, companies will offer discounts to the first Tycoon on the map to open up routes between certain points, such as a factory and a harbour. Once you open up these routes, they will be subsidised (i.e. insanely profitable) for a short period.

You’ll note I said first Tycoon there – that’s because you're not alone in this world, you have a number of computer controlled opponents attempting to do what you’re doing; becoming the best, not going bankrupt, and controlling the world’s transport routes. It adds an interesting challenge to the game, you can’t be methodical and expand slowly, you’re forced to take chances, and play not only the world, but your opponents. After all, it’s no good having a nice little local system when you’re at the behest of a national behemoth shipping containers from coast to coast.

One thing to point out is that you need to have access to the original files from Transport Tycoon (and the first step in finding those files, if you haven’t got the original disks, is supplied when you run the application on your UIQ3 device). I know there’s a legal reason why these aren’t supplied with the game, and also why there isn’t a direct link to the required files, but it really does lower the impact the game has. On one hand you know that you will be getting the actual Transport Tycoon game, with all the original intricacies involved.

But you also can’t just download the SIS file and away you go, and it places a reasonably high barrier to entry to getting a mobile version of Transport Tycoon. It is definitely a worthwhile endeavour for those looking for a strategy game on UIQ 3, but the appeal is limited – not only do you need to be looking for a title that can take hours to play at each session, but you need to be able to hunt down the missing files.