Bridge is a game of great depth, and putting it on a phone is truly mind blowing (more so than Quake).

Bridge. The quinisentially English card game. It's long, complicated, played in Victorian Gentleman's Clubs for high stakes over a glass of port and a Havana Cigar... and now it's been squeezed into the Series 60? How can this appeal to anybody?

Quite easily actually, when you step back and look at it. Here's a quick "what the Sam Spade is Bridge?"

Bridge is basically a game of "Trumps" but with a few twists. Trumps of course is the game where everyone in the group plays a card, and who ever has the highest card in the same suit as the first card, wins that round. Its called Trumps because at the start of the game, you cut to a card, and that suit is 'special.' Because whenever you play that card, you will automatically win that round, no matter what the first card's suit was. (Of course, if two people play a trump, the higher trump wins).

Got it so far?

Now, imagine playing Trumps with only 4 people. And instead of getting only a few cards, all the cards are played - so you each have 13 cards. So whoever wins the most tricks is the winner? Almost, because your score is the tricks you win, plus the number of tricks the person across the table from you wins. So you're playing in a team of two, against another team of two.

Before you start to play cards on the table, you take turns to say how many tricks you will win between the two of you. So I might say 1, the person next to me says 3; my partner (sitting opposite me) says 5. The forth person says "Pass" because he doesn’t think they can win more than 5 tricks (each bid must be higher than the last). I say "Pass" because I think 5 is possible, and the person next to me (who sad 3) also says, "Pass" because if his partner had some good cards to win the rounds, he wouldn't have said, "Pass."

And here comes the final step.

In "Bridge," you do the entire above, but you not only say ho many tricks your team will win, but what suit you want trumps to be. So "Three Hearts" means we think we can win 3 tricks, with Hearts as trumps.

If you've followed this so far, then you know how to play Bridge. But becoming a good Bridge player is more than just knowing the rules. 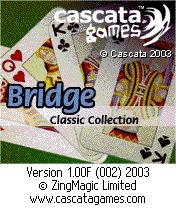 Bridge has always been a particularly good challenge for computing AI. While there s a definite structure of rule of thumbs when playing Bridge (especially during bidding) most of the best human players rely on intuition, and a fantastic sense to 'see' the game develop before they even play the first card.

This is hard to replicate on a computer. Unlike chess, where each more allows you to instantly judge how beneficial a board layout is, Bridge doesn't make that sort of comparison, and requires a heuristic approach, mixed with fixed rules. This means that you define strategy, rather than a brute force approach. The more powerful pocket computers are only now finding themselves with enough oomph to run a Bridge AI with a decent challenge for a human player. And the Series 60 offering from Cascata is certainly challenging. 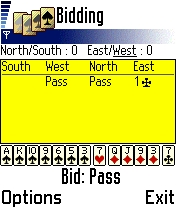 52 playing cards on the diminutive Series 60 screen is impressive. Keeping everything clear and simple to understand, but not restricting function, is probably the most impressive thing in Omar Sharif Bridge to the programmer in me.

The Bridge player in me (hey, I was the President of my High School Bridge Club so don't quit mocking me, okay?) loves this. I've got a strong opponent (but one who is beatable if I use a good strategy - just as Bridge should be). Because Bridge is a co-operative game as well as competitive, the AI also means my partner actually works with me, and an pick up on my signals - just as I need to pick up on his if we are to have any hope of winning.

The 'playing tricks' screen is the one you'll spend most of your time in. rather than trying to show fully detailed playing Cards, Cascata has went for a view that is similar to what you'll see in Bridge books and those Bridge puzzles in certain daily newspapers. 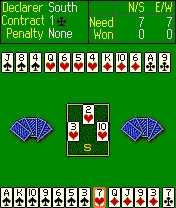 The 'bidding' screen is where you decide with your partner what you think you can win (the Three Hearts bit from earlier). You can see your hand, and the history of the bidding - which is better than playing Bridge for real, when you have to remember what your partner said. Pay attention to what your opponents are saying - if the are both talking spades, then you can probably guess what they high cards are that they hold.

To sum up. Cascata's version of Bridge is lovely. The interface is simple, everything is clear and understandable, and they provide a huge pdf file explaining Bridge to the new player. Experience Bridgers can dive straight in, using the intuitive layout and controls, and just play...

As with pretty much any review, the scoring is always a little bit subjective. Bridge is a hard game to get into (much harder than Super Monkey Ball for example), but for me it provides much more reward. It is tactical, and you can have long strategies to win a game. But sometimes it's all down to the turning over of one card. That's the gamer's rush right there.

Bridge is a game of great depth, and putting it on a phone is truly mind blowing (more so than Quake). It gets an AAS Recommended, even though a lot of people will never fully appreciate it.

Blim Quotes from Omar Sharif are taken from "Play Bridge With Zia," published by BBC Books and available from all good bookshops... and some of the lest reputable ones as well.