You may remember that I reviewed the Java-based Odesys Backgammon a while back, giving it a whopping 92%? I'd been meaning to take a look at the chess equivalent for a while and was, if I'm honest, a little reticent about showing off to the multiplayer world how hopeless I am (relatively speaking) at the game. I was right to be reticent, but I shouldn't have waited so long - it's a fabulous implementation of the game...

Odesys Chess is available for almost any smartphone or feature phone, including all S60 and UIQ devices of all vintages.

Never mind the current craze for 'Brain Training' games, designed to keep your grey matter challenged (and thus not deteriorating too fast as you sink into middle age), you'll get far more stimulation and far more excitement by installing Odesys Chess instead.

Now, I know what you're thinking. "Chess?" How boring does that sound? And, to be fair, you have to be a real chess nut to enjoy playing against the computer (or in this case, your smartphone). Yes, it's a challenge (depending on the skill level you set up), but you just know you're being ground down by an artificial brain with no real flair or imagination. No surprises. And Odesys Chess has up to 8 skill levels, if you do want to play this way.

But you'll get far more from the game if you play other people. You'll get unpredictability, bad moves, inspired moves and gambles that no computer on earth would take. Most of all, you get the adrenaline rish of knowing that you're pitting your wits, in real time, against another human being, somewhere on the planet. 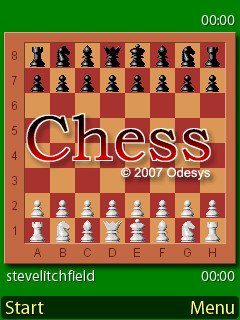 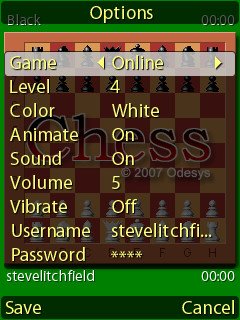 Odesys Chess achieves this by hooking up to FICS, the Free Internet Chess Server, which usually has dozens of people hanging around, day or night (although it's obviously probably 'day' where they are in the world), ready to play, or 'seeking', in FICS parlance. As part of the seeking process, each player declares the length of game that they're prepared to play - you'll remember that time plays an important part in the real chess world, with specialist chess clocks being standard fare at chess clubs and all good pro or amateur matches. In the mobile world, the reliance on time limits is also important, since you'll probably have limited time to play before arriving at wherever it is you're going. So, if you were on a half hour train journey, you'd see for games with a 20 minute limit, for example.

Obviously you have to be sensible about setting times for matches. Allowing 5 minutes for the entire match may just about be workable with both parties in the same room and a real chess clock. But factor in manipulating the pieces on a virtual chess board on a mobile's 2.4" screen and two and a half minutes for your side of the match is barely going to be enough to work the interface, let alone play a good game. In practice, ten minutes plus matches are recommended. Having started to 'seek' a game, you'll have invitations to start a match arriving within a few seconds. 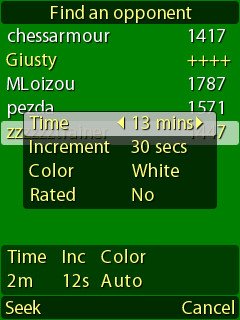 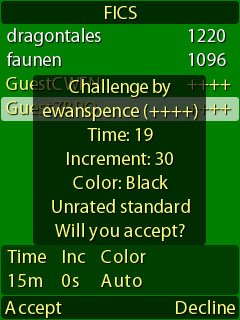 There's little fancy about Odesys Chess's interface, but the board is clearly depicted and there are options for audible and vibrating alarms whenever your opponent has made a move (more important in longer matches, clearly). To move a piece, you select it with a d-pad and then step through the possible landing areas - these are usually presented in a logical order, though not always. But fighting the interface isn't a problem most of the time, thankfully. By default your opponent's moves are animated repeatedly for a few seconds, which is useful and solves the 'now where the heck did he (or she) go?' problem. 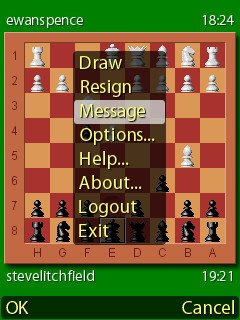 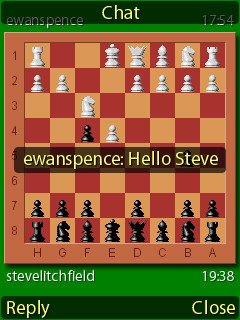 There's provision to send messages to your opponent, although I couldn't find a way to 'pause' a game, which might potentially be annoying if I had to field a phone call while watching my precious game minutes and seconds counting down. But a minor black mark on the system. 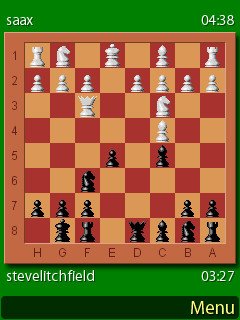 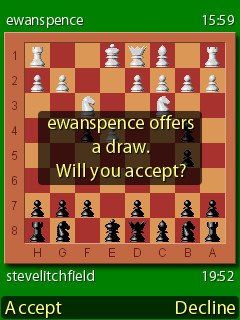 As has been observed in many areas of gaming, going 'multiplayer online' transforms a genre and takes it to another level. FICS allocates every player a chess rating (I won't reveal what mine is!) and manages the raising or lowering of this, dependent on who you beat and what their rating is. So there's a genuine sense of improving yourself and your rating, matched against people all around the world. It's addictive and, provided you've got any enthusiasm or inclination for chess at all, will solve the problem of whiling away your commute into work once and for all.

It's worth noting that Odesys Chess is basically free (in 'Lite' form), including the multiplayer/online functions, but the 'paid' version (a paltry 4 PayPal dollars) lets you choose AI opponent levels harder than '1'.