Rafe reviews the 3GSM smartphone that got the least attention but the one which will possibly be the biggest success.

The Nokia E65 was announced at last month's 3GSM conference in Barcelona, alongside its fellow Eseries devices the E90 and E61i. Together with the news avalanche that goes with 3GSM, this means that this compact and attractive handset probably has not received the attention it deserves. 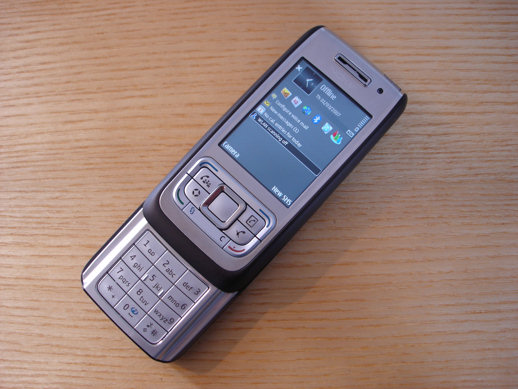 The E65 is a 'slider' and, with dimensions of 105x49x15.5 mm and a volume of just 74cc, is one the smallest S60 devices announced thus far. The styling and design of the device add to this feeling; with rounded edges and soft materials, the E65 feels (subjectively) small in the hand. This is often more important than the actual physical dimensions of a device. The E65 is as small, if not smaller, than many of the standard feature phones that it might be competing against. It also compares favourably with the E60, which was a good device but was a little larger than many standard phones.

The E65 is an attractive smartphone and shows a lot more style that the first generation of Eseries devices (the boxy E60 springs to mind). The front is a mixture of a rubbery-feeling plastic (on the sides) and a plastic housing (on the front) for the screen and control keys. The back features leather-like material (battery cover) and the same rubbery plastic from the front (camera housing). These materials add up to a phone that is easy to grip and which feels comfortable to hold. 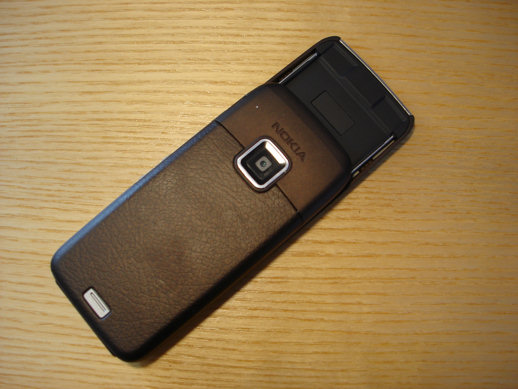 The slider mechanism is very solid and there is a nice clunk as you slide it up or down; it is a definite improvement over other Nokia smartphone sliders such as the N80 or N95. The keypad surround and slider runners are metallic, with the keys themselves made from a hard plastic. They keys are of fair size and although they look a little (horizontally) cramped they initially perform well thanks to a combination of ridges in each row of keys and to the generous vertical height of each key. It should be possible to achieve good text entry speeds using predictive text. The device is weighted such that most of the mass is in the lower half of the slide, and as a result there are no problems using the keypad, as can be the case in other sliders.

On the right hand side of the device are four keys; the record key (voice notes and voice commands), the pencil key and volume up and down keys. These have been well positioned and should suit both left and right-handers. The E65 uses a Pop-port, located at the bottom of the device; I would have preferred to see a mini-USB port, but the necessary (mono) headset and PC cable will be provided in the box so the majority of business users will be not be too concerned. 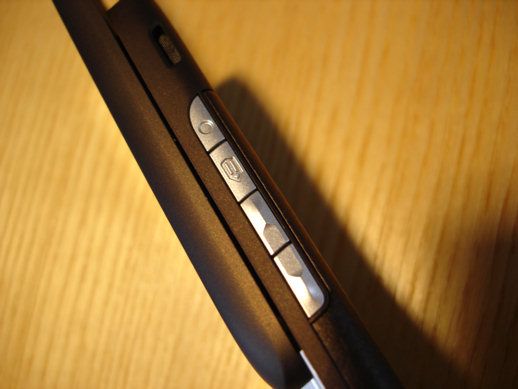 The control keys are clustered beneath the QVGA screen, smaller than on many other S60 3rd Edition devices (56mm diagonal compared to 62mm on the N73 and 67mm on the N95) but larger than screens on comparable feature phones. Thus on-screen writing and icons can be a little small; it is a shame that the scalable font options found in Feature Pack 1 of S60 3rd Edition are not present here. The usual navigator key and control keys are present, but they are joined by four 'one touch' keys (Conference, Contacts, My Own and Mute) for accessing common functions. The navigator key is excellent for general use, though may not be ideal for games. A central button provides selection, while the surrounding ring provides directions. The function, calling, cancel and S60 menu keys are a little small, but a raised outer edge prevents most mis-keys. 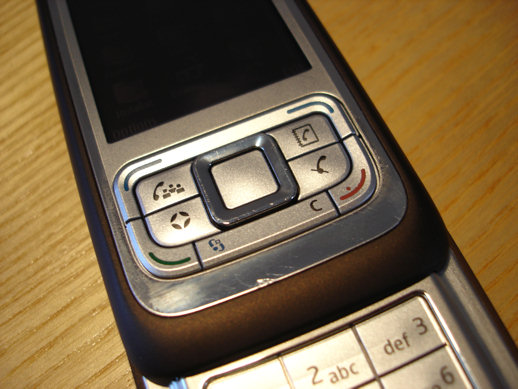 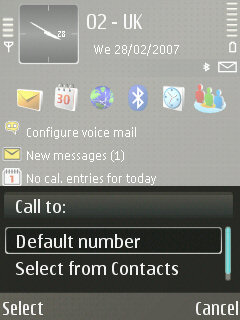 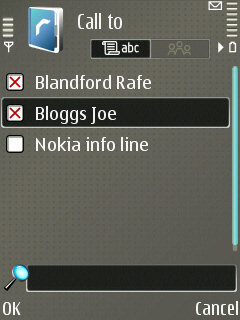 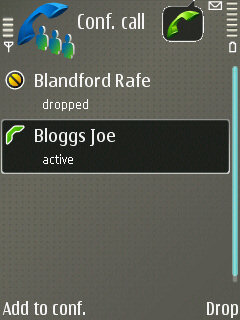 The Contacts one touch key will open the Contacts application, of course, and on a second press will act like a 'back' key, returning the user to the previous application or location in the phone UI. The My Own key can be set to start the application of your choice, while the Mute key will mute the phone's microphone during any call. This facility is particularly relevant to conference calls, where muting your microphone helps reduce the background noise which can blight conference calls with multiple participants. When the mute key is used, a large mute icon is displayed on the screen. The one touch keys can apparently be changed at the request of large enterprises and operators. There are likely to be E65 variants that replace the My Own key with either an operator shortcut key or a shortcut key to corporate PBX or VoIP systems.

The extra buttons are one of the key propositions of the E65 and, together with the small size and number keypad, indicate that the device is firmly 'voice centric'. 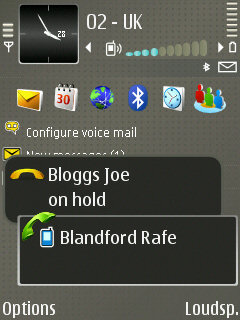 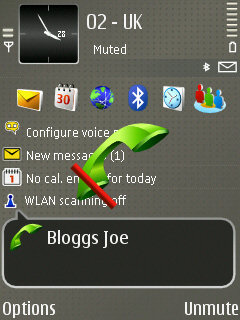 The E65 has good connectivity options, with quad-band EGSM, WCDMA (3G), WiFi, USB 2.0, IrDA and Bluetooth 1.2 all supported. However, there is no front facing camera for video calls, so the WCDMA connectivity's main use will be for data.

Thanks to the inclusion of WiFi, the E65 is also a very capable VoIP device. It includes the second version of Nokia's SIP stack, which has better support for NAT transversal and therefore supports a greater range of SIP services. The Internet telephony application is also present, which allows you to manage multiple SIP services and set VoIP as the default call type when a SIP service is successfully registered. In practice, this means that, once set up, you can forget about the VoIP functionality - the phone will automatically use it when you make calls if it is able to do so.

The Nokia E65 runs S60 3rd Edition, with the usual array of applications. Multimedia is covered by Real Player, Music Player, the Camera application and Gallery. The E65 is initially shipping with the older versions of these applications, which is a shame, especially in the case of the Music Player. More irritating is the inclusion of the HS-5 Pop-port headset in the sales package, this is a mono only; a stereo headset would enable more users to get more out of the phone out of the box. 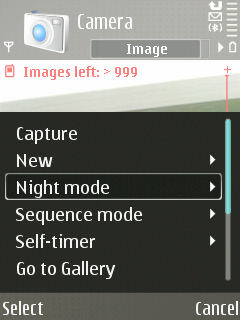 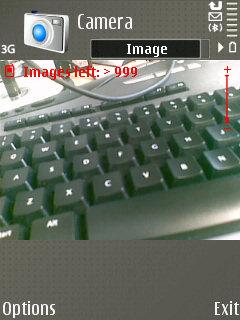 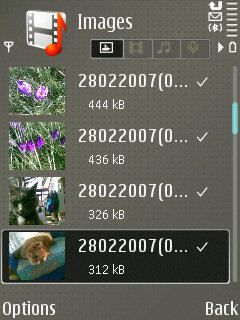 The quality of the images from the 2 megapixel camera is quite acceptable, but nothing special. There is no Flash LED, macro mode or auto focus, which limits the conditions in which the camera can be used. However, it should still be good enough for quick snapshots, and the start up and capture time is good. A few sample images are shown below. 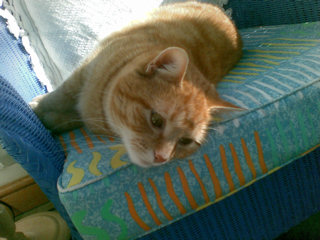 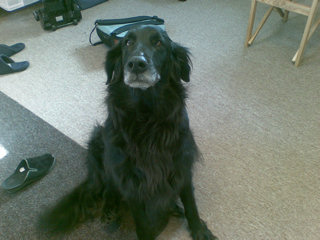 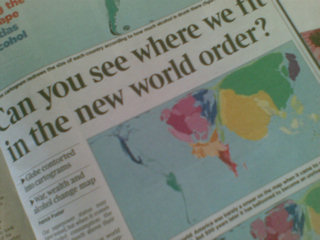 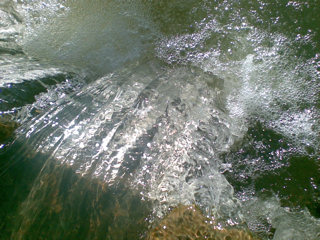 Messaging is a key selling point of the Eseries range of devices and the E65 is no exception. The phone supports push email services from Nokia (Intellisync), Microsoft (Exchange), Blackberry (Blackberry Connect), Good (Mobile Messaging) Visto, and more. Clearly, with the absence of a QWERTY keyboard the E65 becomes more of a read only email device, although short replies are possible using the number keypad. Mobile email in general has been taken up by only a minority of enterprise users - there are a great number who might benefit from always-on access to email and who only need read access. A device such as the E65 is ideal for this type of user.

Outside of Multimedia and Messaging, there is an impressive suite of accompanying software, ranging from the standard PIM applications to viewers for Word, Excel, PowerPoint (Quickoffice) and PDF (Adobe) documents, as well as a Zip Manager (Epocware) and the Search, Teams and WiFi (wizard) utilities which are now standard on Eseries devices. Many of the newer features of S60 have also been called on to round off the package, these include the Message reader application (reads text messages aloud), Voice Control (which can be accessed by holding down the record button on the side of the device and includes speaker independent voice recognition for all stored contacts) and the Welcome applications (Settings Wizard, Transfer and Tutorial). 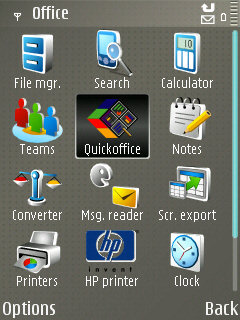 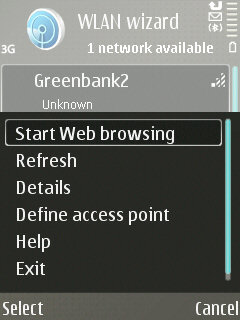 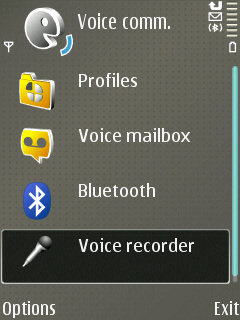 The E65 may not have the glamour of the E90 or the popularity of the E61i, but it should not be underestimated and I think it is the dark horse of the Eseries range. It is a reasonably well specified, but competitively priced enterprise focused device, which is ideal for office workers looking for strong voice features and a read only mobile email solution. It makes a compelling addition to the overall Eseries portfolio, slotting in between the E60 and the E50.  Outside of the enterprise focus, the multimedia features are mediocre in comparison to Nseries phones, but they're still better than much of the competition. Thus the E65 may also appeal to general consumers as its size and design will attract those looking for a little extra from their day to day phone. 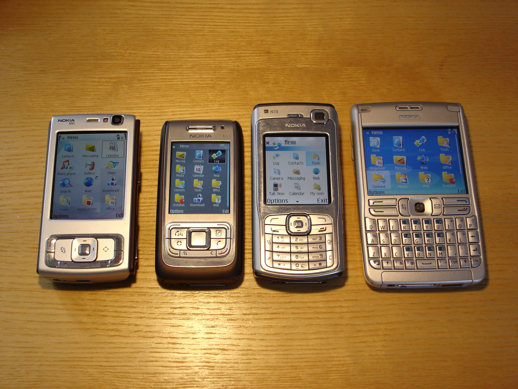