Ewan examines the hardware design of the Nokia E61i and finds that it compares favourably to its predecessor. 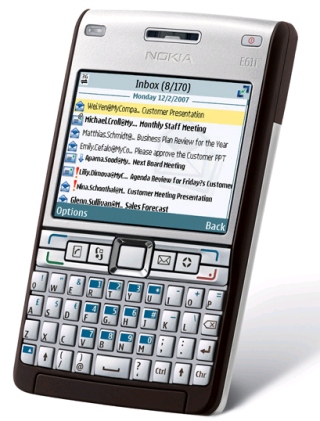 Nokia have, in the past, managed to successfully improve both popular and unpopular products with slight product revisions. The N-Gage to the N-Gage QD, and the Nokia 9300 to the Nokia 9300i both spring to mind. Have they successfully pulled off this trick with the E61i? As with previous iterative devices, there are some slight changes to the physical device, a few changes inside, and a general polishing of everything with an eye on the extensive user feedback that has been gathered.

The most striking featuring of the E61i is the black trim around the edges of the device. Where the E61 was a solid uniform silver plastic colour, the E61 now runs some cool black plastic trim around half of the edges – it puts me in mind of a Ford Cortina GLX from the seventies adding some go faster stripes. Because while the underlying processor and specifications of the E61i is identical to the E61, it does look and feel much more business like. In terms of size the height and width of the two units are broadly similar; the main change is in the depth. The E61i is a much flatter device compared to the E61, tapering from a 'thinner by a few millimetres' at the top to roughly the same at the base. Nokia have tightened up the internals of the device and used a slightly smaller battery compared to to the E61 to achieve this.

Into this smaller space though, Nokia have added a 2 megapixel camera, to give the E61i the ability for both still pictures (up to 1600x1200) and video (at 352x288 resolution). It’s an interesting decision, as the marketing for the E61 covered the lack of camera by pointing out a number of businesses would not buy camera phone enabled smartphones. With similar specifications between the E61 and E61i, it appears that IT departments and users are now getting a marketplace choice, assuming the E61 continues to be available. The camera is not fantastic, there’s no Carl Zeiss lens here, but for capturing the moment it does the job as well as any of the other Nokia S60 devices which use a 2 megapixel camera.

Replacing the plastic lightweight Magnesium alloy battery cover on the original with a much 'colder' metal cover also adds to this business-like air of the E61i. All told it is an interesting choice from Nokia, and I think that most people will prefer the new styling to that on the original unit because it has a slicker overall feel.

Next up are the changes to the qwerty keyboard, the small thumb keyboard is broadly similar at first glance. However, the individual keys are slightly smaller and their profile is slightly more domed. The jury is out on which keyboard is the better performing – my own feeling is that, on balance, each style comes out with an error and speed rate similar to the other. On the other hand I know Rafe thinks that the keyboard is a significant improvement and is easier for new users to adjust to, based on his experience of a couple of days of use. [I agree with Rafe - I had the E61i for a few days and handed it round some friends - they thought the keyboard markedly better. Steve] 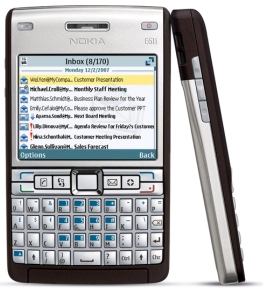 There are more obvious changes in the control keys that are grouped at the top of the keyboard below the QVGA screen. The E61 had a central joystick to control the cursor and select items, while the E61i replaces this with a central select button, and a raised square ‘ring’ surrounding this for the direction controls. You can sit your thumb gently on the central button and work the direction controls without selecting anything, but, at first, it does feel a little bit like luck that you’re not hitting any of the surrounding keys. I’m sure that this is something I’ll become more comfortable with in time. Personally, I feel that compared to the simplicity and accuracy of the joystick directional control on the E61 this is a step backwards. On the other hand the E61 joystick could cause sore thumbs with prolonged use and others will favour the new style controls over the old.

Surrounding the directional controls are a number of quick access keys (Nokia refer to these as 'One Touch' keys) for your Contacts, the S60 (apps) key, Messaging and finally a 'My Own' key. The latter is a programmable button that you can set as a shortcut to any installed application or browser bookmark). Being a bit old-school I’ve made this a short cut to the File manager application but I am fairly confident that most people will have either the Web browser or Calendar set up here. It would be nice to have the option (much like you do on a Palm device) to reconfigure the other fixed buttons to your own choice, but  that's the power user in me talking and perhaps this is an opportunity that a third party software vendor might grasp.

Flanking the directional controls and the One Touch keys are the soft key and call keys. They are styled with long thin sections surrounding the central keys, and this contribute greatly to the modern look, but unfortunately these strips don’t actually move. In order to use these keys you need to hit the main part of the key (on the outer edge). Once again, this is something that I could get used to over time, but I think this is sacrificing simple functionality for a stylish look. 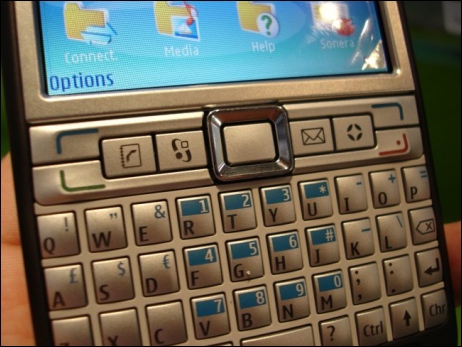 The overall effect of the redesign of the control keys is to make the E61i look more modern and stylish than its predecessor. How necessary this is in an enterprise focussed device is open to debate. However, together with the style comes usability improvements, the extra One Touch keys increase the accessibility of core device functions.

The E61i looks like a modern device; by this I mean that in the looks and design department, it now compares favourably to the keyboard based Palm Treos and Blackberrys of the business world. This is important, because while Nokia may well be regarded as a leading manufacturer in Europe and Asia, the same isn’t true in America. Couple this with Nokia's perceived lack of enterprise experience, and it's a good thing that the design does measure up (and in some cases surpasses) the incumbent enterprise devices.