I pine for the good old days, when games were real games. When a difficulty level meant something. And by God, Nebulus (from Telcogames and Magic) might as well be wrapped in a blue box with a flashing light that goes vvvwwworp when it travels in time and space, because Nebulus is so old school.

Now if you’ve been around the block a bit you’ll recognise the name Nebulus, so I might as well finish the review for you lot here. It’s a pixel-perfect remake. For those of you unfamiliar with the concept, here we go. You control a little alien critter, species unknown, who can run around, jump and fire a deadly ball. Your ship will drop you off at the bottom of a tower, and your mission, should you choose to accept it (and given you’ve bought the game you probably should), is to reach the top of the tower. 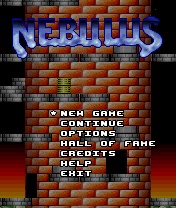 Around the outside of the tower are platforms and lifts, along with passages through the centre of the tower allowing you to get to the other side, where the layout of platforms might make your mission a little bit easier. A pretty simple concept and one that you can see repeated through many games down the ages. Two things make Nebulus stand out and worth the purchase price.

The first is the look of the game. I don’t mean the colourful cartoon-like graphics used for all the enemies that inhabit the outside of tower. Sorry - did I forget to mention that little problem? Come into contact with them and you’ll be stunned and fall down the tower – if you hit the bottom, you’ll lose one of your three lives. Anyway, the big ‘wow’ of the look is the fact that while you move left and right around the tower, your critter doesn’t ever leave the centre of the screen – the rest of the tower rotates around the screen. It’s like having a fixed camera always looking at the centre of the tower through you.

In practice this means that as much of the portrait orientation of Series 60 is used as possible. The original was like this as well, so there’s no faulting Magic in their selection of which 8-bit classic to convert that would make best use of the Series 60 hardware.

The second thing to note about Nebulus is that it’s hard. Now I don’t mean hard as in 'this will take a bit of time to get through', I mean hard. As hard as a diamond, wrapped in kevlar. And then some shrink wrap that goes round your sandwiches. Games were a lot less forgiving in the eighties, and Magic decided (correctly in my opinion) not to water down the difficulty level of Nebulus during the porting.

You’re going to get hit by enemies a lot when you start playing. You’re going to need to have almost split-second timing, and really focus on which options are open to you at every turn to make sure you choose the correct one, and maybe a little bit of luck. You’ll get frustrated. You’ll realise what the term ‘learning cliff’ is. You’ll probably give up a couple of times. But Nebulus needs time, and you’ll be rewarded with a great little game that will give back just as much as you put in, if not more.