My Little Tank is a classic PDA game that has now made it onto S60 3rd Edition along with an extra 20 levels. Can the retro gameplay measure up to modern standards? Find out in All About Symbian's review... 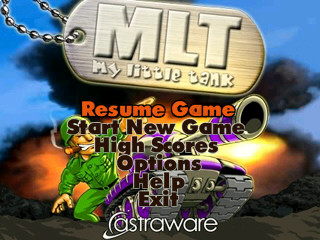 My Little Tank is a traditional 2D tank game, part of a genre that has been around since the dawn of computer games. You drive a little tank using a top-down view of the battlefield while trying to shoot other tanks, with a few mission objectives sometimes included such as destroying or defending particular buildings.

Tank shells fly very slowly in this game so you have time to avoid them if you notice them, and in fact that can be a vital part of the game: tanks can be shot even when they haven't yet driven onto the screen, so if you see a stream of fire coming from one direction you may want to fire that way to destroy the enemy tank at the other end of the stream. Enemy bullets can also be shot down in mid air, so it's best to shoot all the time simply as a form of defence, and use whatever cover is available (though many types of cover can be shot away).

Bonuses occasionally appear including "freeze all tanks", "speed bonus", "weapons upgrade", "smart bomb" and others. Collecting these is vital, especially the weapons upgrade, otherwise you may be overwhelmed by enemies on some levels.

The game contains 80 levels, and has an excellent in-game tutorial that appears the first time you play it, which is how all games should be. However, the learning curve is fairly unforgiving and as far as this reviewer could tell there are no restart points either. Also, any weapons upgrades you've picked up disappear when you lose a life, making it even harder to finish a tough level. On top of that, any tanks you destroy take a while to disappear, leaving you a sitting duck if you're stuck behind them. 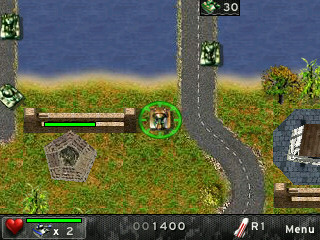 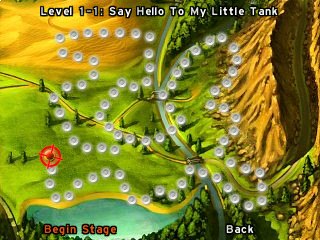 The graphics are reasonably competent 2D, the kind you might have found on the Atari ST and Amiga, with the occasional bit of 3D for buildings. The scenery joins together well, but there's not much variety, with the same terrain and buildings repeating very often. Your tank can be customised in several different colours, though the design of the sprite means the colours aren't very visible.

Sound has the usual effects for guns etc, and there's some reasonable electronic music playing in the background. It's nothing special, but it's not bad either. 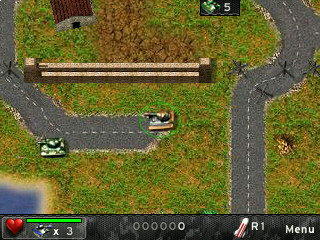 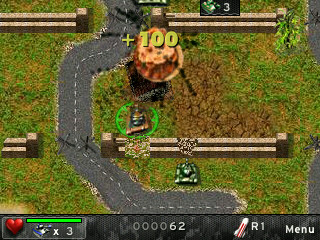 If you have a Nokia 6220 Classic, N79, N82, N85, N93, N93i, N95, N95 8GB or N96 you can use any of their functions, including gaming, through a television set thanks to their TV Out feature. This feature works on any set with a composite or SCART connection (SCART-only sets will require a very cheap composite adaptor however).

You can control games from the phone itself. If you want to control the phone wirelessly, you can use an HID-standard wireless Bluetooth keyboard, or you can use a Nintendo Wii controller if you install a special application called Mobipad.

The graphics in My Little Tank look okay on a TV, though some backgrounds such as grass look a bit messy.

The actual gameplay is fine on a big screen as all the sprites and objects are very clearly defined, and it feels very much like playing a 16-bit or 8-bit computer game. 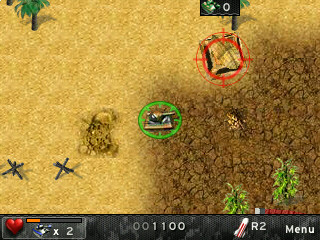 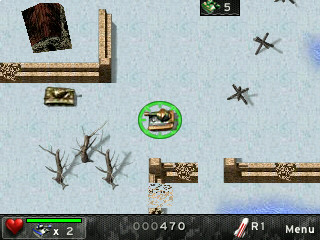 My Little Tank's apparent lack of restart points is just silly in this day and age. There are 80 levels which should be more than enough gameplay for a $10 phone game, so why do they have to be artificially stretched out by forcing players to re-do previously completed levels? And why do players lose all their power-ups when they lose a life?

Perhaps the biggest drawback though is the lack of a multiplayer option. At its heart My Little Tank is a straightforward game of paintball with the usual variations (defend the base, capture the flag etc) so it would be an absolutely ideal game to play with other humans, either competitive or co-operative. Adding some form of multiplayer, internet and/or Bluetooth, could really make My Little Tank a "killer app", and if Astraware is considering doing online gaming this title would be a great place to start.

There is something potentially addictive about MLT, it's pretty fun to play, but frustration soon sets in as you find yourself doing the same levels again and again just to get back where you started, and losing all those precious powerups at the same time as losing a life. MLT is basically a bit too annoying to play.

On the other hand, if you're an old-fashioned gamer who loves a traditional shoot-em-up, perhaps this could be your cup of tea?

PS: This is a slightly updated version of the older PDA game of the same name. Instead of the original 60 levels there are now 80 levels.

Where To Get "My Little Tank"

It's compatible with Symbian S60 3rd Edition devices with 240x320 (QVGA) and 352x416 screen resolutions. If you're unsure about compatibility, download the demo from the link above and try it on your phone.

Sorry, there's no UIQ3 version at the moment.