Taking a smartphone online separates the men from the boys - so does the Z10 get to leave nursery and head to the internet school? Ewan finds out in part three of his Z10 review.

Modern smartphones are expected to connect to the internet and work online with ease - and the last year or two has certainly raised the bar. If it is raised much higher then the simple internet suite in the MOTO Z10 is going to need to levitate to clear the marker, but for the moment, it's going to proceed to the next round. Just.

One of the first things to strike me about the Z10 was that it didn't work out the internet settings that I needed to use when I popped in my T-Mobile SIM - it simply stayed with (Steve's) Vodafone settings that it was already on. Strike one against the usability studies, as I start jumping through all the icons to get to the right place in the control panel. Great for fiddlers, but modern smartphones should be ‘it just works' affairs, and given other (e.g. S60) devices auto-switch settings on SIM insertion, this counts against the sleek silver machine. 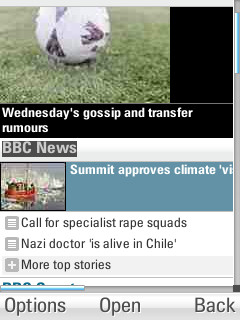 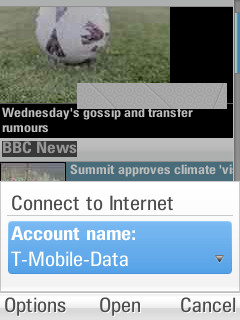 The web browser is the UIQ 3 stable of Opera and runs very nicely as well - while it works both on full blown screens and ‘mobile optimised' sites, there's still a tendency for me to switch to the lowest bandwidth sites to get more text and less (squeezed) images onto the page. Even with 'small screen rendering' the web works better when the web sites themselves are set up for small screened devices, rather than hoping they can cope with a nice fixed width page.

Being a non-touch screen device, you'd think the Z10 would cope with some difficulty on a web page with all the links to navigate through. In fact it copes quite well, and using the d-pad to jump from link to link scrolls the screen at a good rate - if you have a longer page of text then it just goes down a page at a time till a link arrives. It's a different approach to the virtual cursor that other devices use (and a world away from Opera on the touch screen enabled UIQ 3 devices). 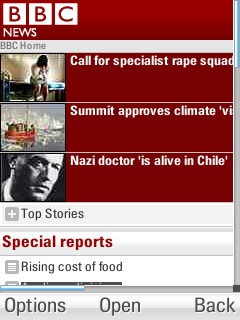 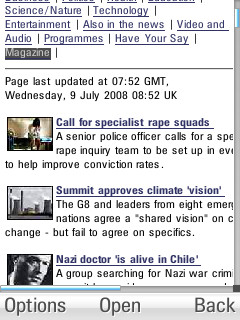 Alternate BBC views, as a 'mobile' and 'text only (sic)'

There's a particular problem with web sites that have pop up menus (such as All About Symbian) because you need to get the cursor away from the menu for it to go away, a sometimes frustrating task, and as web sites become more UI driven with interfaces and dynamic menus, the ‘link to link' methodology starts to break down. It's time for that virtual cursor if you're not on a touch screen.

Final point on the browser that drove me mad... entering URLs with a backslash in them leads you on a merry hunt around the keypad to find out where it's lurking (about 25 key presses away on the'1' key or deep in a choice grid on the ‘#' key), which is an awkward place to have it, given that it is a popular character for browsing.

The messaging client is well put together, and I especially liked the Messaging home screen which allowed me, with a left and right press, to tap through a two line status box and see the number of messages awaiting action in the various boxes (Inbox, Drafts, Sent, Outbox, etc). There's also the separation of Text (both SMS and MMS) and Emails in the opening view, although once you click through there is a consistent layout to both. 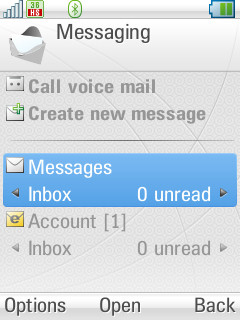 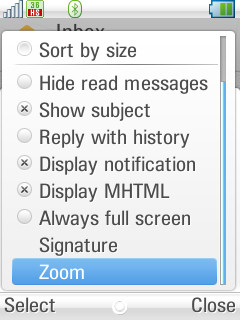 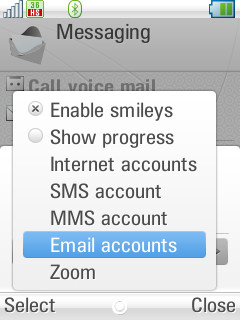 Coming with both POP3 and IMAP4 support, there's no built in push email integration, e.g. Blackberry or MS Exchange support, but the old faithful standby of timed checking of email can be activated, from setting fixed times in the day to check mail (and the option to grab just headers, to keep bandwidth down) right down to polling every minute - which pops up the helpful warning that this might cost you quite a bit. You can lock an email account to a specific internet access point (such as T-Mobile UK) so you shouldn't be hit with roaming charges if you stray into another international carrier's coverage. [Note again that the Z10 doesn't have Wi-Fi as an option - Ed] 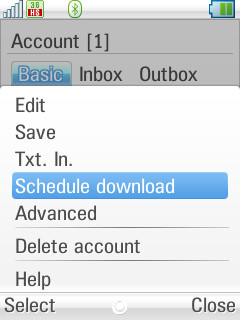 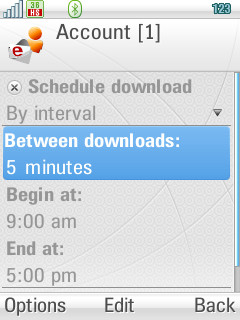 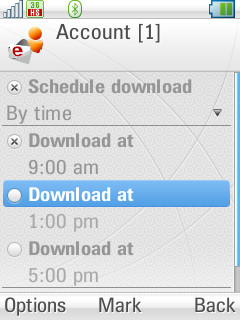 Also supplied is the Yahoo Go application, which perhaps says more about Motorola's target market for the Z10 rather than any grand strategy. Either that or they've sorted out a bundling deal to differentiate between handsets that come with Google apps built in. What this hungry Java app does flag up is the memory handling on the Z10; you'll be constantly in search of RAM. With the web browser open you're not going to get the Java engine opening anything. In theory, when a new app opens and needs memory, an old app should shut down, but in practice it sometimes doesn't happen, especially when said apps are large. With the web browser open, and then in background, you get the fun situation of realizing that your 13MB of free RAM has gone - and you can't force an exit of an application beyond switching off the Z10 and rebooting. Ouch.

The internet suite on the Z10 is just the right side of acceptable in a modern smartphone (or at least it would be if you sidestep the memory handling issue). The browser talks to most sites, and with some scrolling and squinting you can get to all the content using just the cursor. The messaging client lets you get to your mails and keep them organized, but it's more a viewer than an active partner in your communication - I suspect that you'll wait till you get back to a full computer to do more than immediate and quick replies. And the lack of office file attachment viewers doesn't help.

There are no ancillary internet applications to take benefit of the rapidly growing infrastructure on the internet for mobile devices. The biggest missing piece is an RSS Reader either for pure text, or for media attachments for video and audio podcasting. Given the strong focus placed on media with this device (especially on video) this is very disappointing.

How Motorola have treated the Z10's internet applications is a microcosm of their approach to the whole device. It's not geared towards the cutting edge commentators, bloggers and tech fans that want the latest and greatest in their hands. It's aimed more at the next level of people, looking for a solid 'phone'. The Z10 is certainly solid, although the software does have some holes at the edge of the envelope. This group of users isn't going to want to do anything fancy, or detailed, and for them, the connected features of the Z10 should suffice.