In this final part of our Z8 review we look at third party application support and then draw some overall conclusions.

Thanks to the open nature of the UIQ software platform, the Z8 is capable of running native third party applications (written in C++). This allows for compelling programs to be added to the phone. Shozu, as discussed in the previous part of this review, is an example of this. Applications can be installed either from the phone or from the PC Sync software. 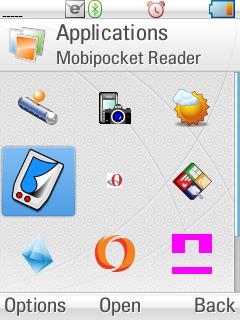 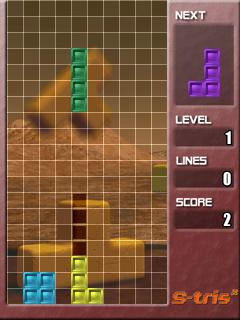 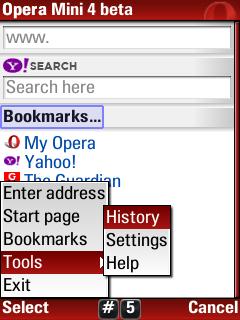 However the reality is a little different. This is mainly due to the fact the Sony Ericsson phones are touch based whereas the Z8 is softkey based. UIQ will adjust the user interface and ‘view’ of applications on either touch or softkey based devices automatically, but in order for this to work correctly developers must follow the style and development guidelines and use the UIQ 3 framework to construct their application layout. Through the UIQ 3 framework, developers can customize the ‘view’ for each style of interaction (softkey or touch) so as to get optimal usability in each instance. This allows UIQ 3 application to have a single code base (version) but still run on both touchscreen and softkey devices.

Unsurprisingly, most current UIQ 3 applications are optimized for use in phones with touchscreens and in some cases either do not make allowance for softkey based devices or have custom user interface functions outside the UIQ 3 framework. For example, a developer might make an on-screen button, but not make allowance for its use with non-touchscreen devices (an example of this is Swiss Manager, shown below). Developers may also have put in references to touching the screen or using the stylus, which is clearly impossible on softkey based devices. In these instances, the application may still work, but such text can confuse the user. Developers may also program to detect specific key inputs (expecting them to be present on every device) rather than detecting generic ones. A good example of this is the scroll wheel found on the Sony Ericsson phones; there is no equivalent on the Z8, instead the d-pad would be used. In some cases there may also be an issue with the SIS (install) file – which may only allow certain devices or device families to install the application. In this case the application may (in theory) work, but can not successfully be installed. 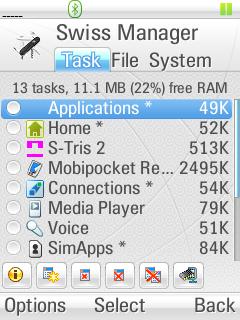 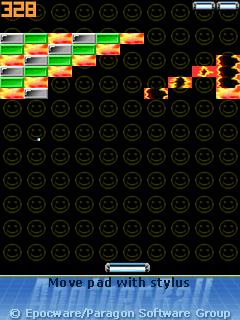 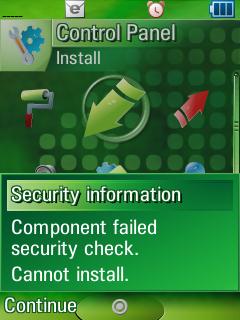 Examples of some of the potential pit falls.

The good news is that a large number of applications do already work with the Z8, although in some cases there is room for optimisation. Of the applications I tried about 70% ran with only minor problems, 10% ran but with impaired functionality and 20% did not install or did not run. [Note: I was testing popular applications and some were specific pre-release Z8 versions; results may be different further down the curve.]

Applications which do not work can usually be fixed relatively easily; with just a few lines of code enabling softkey style operation or by changing the key inputs accepted or by fixing the SIS install file or by changing the text strings used in the application. It is really a case of the Z8 suffering slightly from being the first softkey style phone rather than there being any particular problem with the platform.

I would expect the majority of developers with applications that do not work to make them compatible within a relatively short period. Both UIQ and Motorola are making an effort to encourage and support this process. In time I would also expect to see more applications which have been specifically optimised for use on softkey style devices such as the Z8. 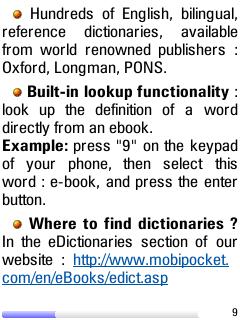 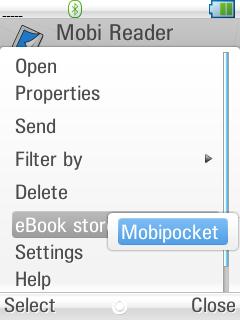 Mobipocket running on the Z8

A good example of how an application can be optimised for the Z8 is Quickoffice. Previous UIQ versions relied on the touchscreen to access a number of controls. With the Z8, these have all been integrated into the menu structure. Consideration has also been given to document navigation and viewing. The directional controls allow you to move around a document, but there is also a page overview mode and a powerful zoom feature with one particularly nice touch - an on screen bar indicating the current magnification level. As before, landscape mode and full screen mode are also fully supported, to make the most of the available screen real estate. 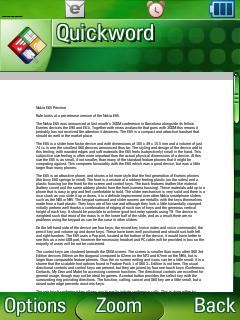 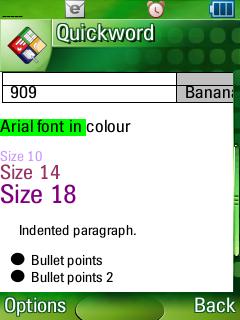 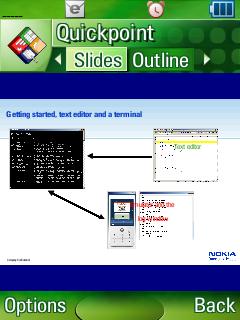 Quickoffice have also taken the Z8 as an opportunity to update the software to version 4 (the previous UIQ version was 3.6, as seen on the P990). Document handling is considerably improved with added support for viewing tables and images in Word documents, better formula support in Excel and improved all round performance.

The current version of Quickoffice for the Z8 is a viewer only (this makes sense, given the Z8’s target market) but editing capabilities are likely to be available in a later release. The absence of any office viewers out of the box makes Quickoffice particularly welcome and, if you need to view office documents on the move, it is an essential application.

Third party application support for the Z8 is a real plus, more so because there is a large existing catalogue of software. The benefits of using the UIQ software platform really shine through here. Compared to some of Motorola’s other high end phones (perhaps with the exception of the Q family) the Z8 is far more extensible and has far greater potential for consumers. Personally, I would have liked to have seen an easy way to get access to this software built into the phone (e.g. something similar to Nokia’s Download! or Sony Ericsson’s Application Shop), but perhaps that is something for the future?

Overall, the Z8’s application suite is very good. The UIQ platform provides an excellent base and Motorola have nicely added to it with the likes of Opera, Sky by Mobile, MobiClip and Shozu to create a rich multimedia experience. There is room for improvement; in particular I would point to the web browser and the music player. I would also like to see more use made of keyboard shortcuts both within the UI and within applications. That said, those moving up from features phones will be impressed by the array of functionality and the versatility of the Z8’s application suite.

However as a long time smartphone user it does sometimes feel as if the Z8 lacks the completeness of the software offering found in its rivals Symbian phones. This is partly because the Z8 is the first UIQ 3 device from Motorola and as such doesn’t have the same level of activity around it as, for example, Nokia’s S60 phones. Nokia does this particularly well, with the provision of extra software both for the PC (e.g. Video Converter, and a better featured PC Suite) and the phone (Podcasting, Mobile Search, Maps, Sports Tracker, Gizmo, etc.) I would have thought a Podcasting or Video Center style application would have added real value to the Z8. There is, of course, room for this to change as additional Motorola UIQ 3 phones are released, but it is also a factor that potential purchasers may want to consider now.

With a capacity of 1030 mAh, battery performance is at the upper end of the range for a smartphone. I would expect most people to get two or even three days usage out of the Z8, depending on usage and connectivity conditions. Heavy usage might cut this down to a single day. With USB charging in addition to the standard AC charging, it's easier and more convenient to top up the power of the Z8 than on many of its competitors. 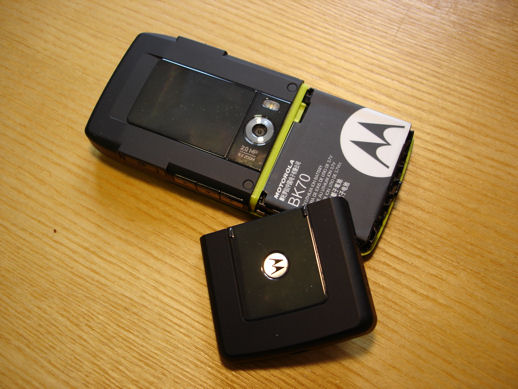 As a phone, the Z8 performs admirably. It may be a rather boring function in some ways next to multimedia, but it is among the most commonly used. You can easily answer and hang up calls by opening and closing the slide and there are the usual on-screen status indicators and timers, along with the call logs application. I found the call quality to be good; the kick-slider is meant to improve voice quality by shaping the phone to your head, but I did not notice any real difference compared to other traditionally shaped phones. Also admirable is cellular reception, with the Z8 being able to pick up a usable signal in some tricky spots.

From a strategic viewpoint, the Z8 is a very interesting phone. Motorola has surprised many people by revisiting UIQ and releasing something new on Symbian OS. As a result of the Z8, Motorola has now made a very significant investment in UIQ on Symbian. The Z8 is not a one off; it is the first of a family of phones. I would expect to see the first of its successors later this year, with more to follow in 2008, and I imagine there will be both software and hardware refinements in these new models.

What impresses most about the Z8 is its overall performance, given that it is the first of its kind for Motorola. This promises much for the future and means that Nokia faces a new competitor in the softkey smartphone space and this can only be good for the consumer.

While the Z8 may fall short in a few departments, most notably the camera, it is still a very capable device. It can be favourably compared to the Nokia N76 and Sony Ericsson W950, both of which I think it outmatches in terms of both style and functionality. At £350, it is emphatically not a cheap phone, but bearing in mind that £60 or so of that cost can be assigned to the bundled Bluetooth stereo headset and memory card, it is still good value and should be attractively subsidised in most markets.

The Z8 may not be the feature powerhouse that some would wish, but it is a cleverly thought out offering that has good potential and appeal. As a multimedia playback device the Z8 does impress, thanks mainly to its excellent screen and bundled headset. The extra software, in the form of Shozu and Sky by Mobile, adds a real marketing and feature advantage that clearly separates the Z8 from the pack. The fast connectivity, provided you have the network support, is ideal for downloading large video files. The looks are stylish, with the innovative kick-slider giving a real sense of difference. And perhaps it is that subjective sense of difference which gives the Z8 a sense of understated elegance.

You can buy the Motorola RIZR Z8 on Vodafone here. 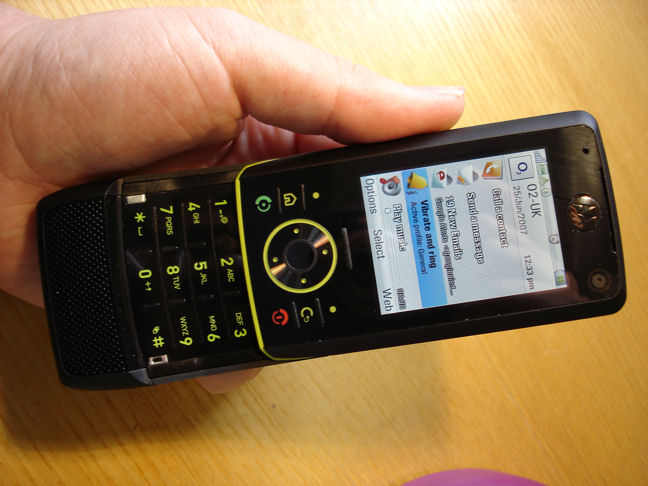