So you're out and about with your smartphone and you bump into a friend or colleague who happens to have some important documents with him on USB flash disk. But.... how on earth to get the files from the disk to your phone? It's a common enough scenario but one which has been insoluble. Up to now.

Thinking about the issue, you'd normally have to press a laptop or similar into service, mounting the USB flash disk on that and then cabling up your phone using its 'Mass storage' mode, then copying files from one 'disk' to another using the desktop's OS.

Or you could just use the Mobidapter: 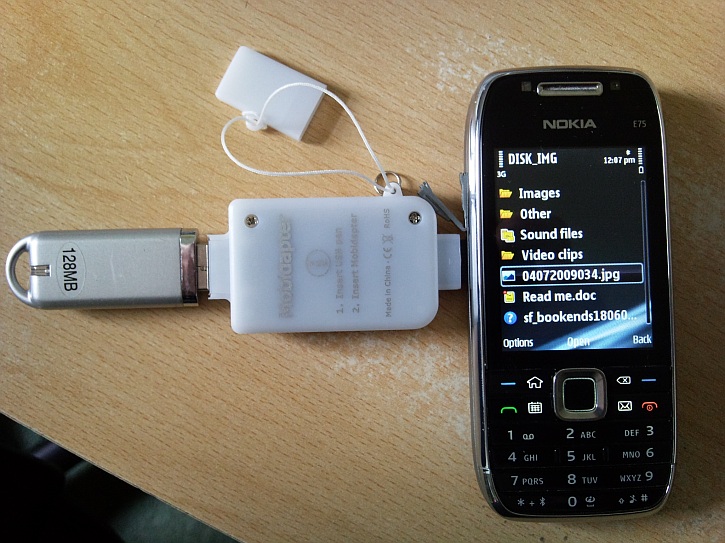 Finished in polycarbonate, this unique little widget solves exactly this problem, letting you mount USB disks as if they were standard microSD memory cards (or miniSD if necessary, using a mechanical adapter) in a phone. Most phones don't have microswitches on their card covers, so it's easy enough to insert the Mobidapter and get the electronics recognised, as shown in these photos. In use, you simply 'see' the disk as a memory card and can copy files, do backups, even install software onto it or from it. 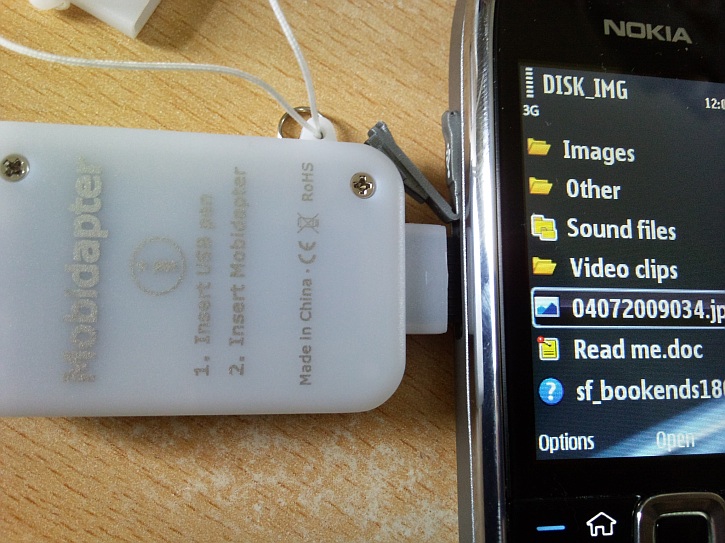 BUT. And it's something of a big 'but'. I worry. I worry a lot (as my wife will tell you). The weight of the Mobidapter isn't significant, even with a flash disk inserted, in terms of applying strain to the microSD card slot and connectors, but with the assembly plugged in, I was very, very nervous about bending the adapter up or down - damage the card slot in any way and it's back to the repair shop for the phone, etc.

It's also vitally important to remember that this is pretending to be a memory card and will, in most phones, need to be 'pressed in' slightly in order to pop it out, i.e. using the spring eject - you can't just pull the Mobidapter out, as is tempting. And it's probably an excellent idea to apply the needed force to insert the USB disk into the Mobidapter before inserting the latter into the phone card slot.

Look, the Mobidapter works tremendously well, copes with up to 32GB (the SDHC specification), works up to 70 degrees C, seemingly doesn't need any special driver software - it's perhaps the ultimate conference accessory for grabbing interesting bits from USB disks. I know for a fact that I could use it, with extreme care, and my phone's card slot would survive. But I worry what would happen if used roughly or insensitively. The Mobidapter documentation doesn't warn about this, sadly - maybe gentle use is considered obvious?

The Mobidapter is also rather expensive, at £33 inc VAT. Regardless, if, after seeing the photos above, a light has gone on in your brain, then yes, you'll want one anyway. Even if just to save the day at the ABC Corp event in six months time.