The ball-and-bricks Breakout genre has been around almost as long as computer games. Meteor brings it to Symbian, but does it bring anything new to the table?

We've reviewed the S60 3rd Edition version of Meteor, but it's also available for all other Symbian platforms including S60 1st/2nd, UIQ3, UIQ2, Series 80 and Series 90 (Nokia 7710). There's also a special version available for the Nokia E90. See the end of the review for all the relevant download and purchase links.

The Breakout/Arkanoid genre has been around for almost as long as computer and video games themselves, and it's a one-player variation on good old Pong. Part of the reason is that it's so darn easy to program such a game, but perhaps another reason is that it's somewhat timeless, still surprisingly addictive after 25 years of existence. The 8-bit clone Batty was particularly good.

We reviewed the S60 1st/2nd Edition version of Meteor way back in 2005, but now we're taking another look at the higher resolution S60 3rd Edition version, to see how it compares to modern smartphone games. 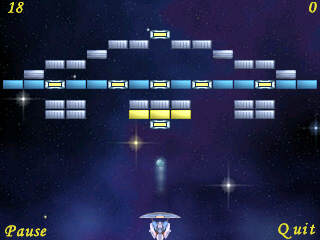 Well, if for some strange reason you've never played Breakout or its variants, here's what you have to do: there's a load of blocks at the top of the screen, and you control a bat at the bottom of the screen. A ball bounces around the playing area and destroys any blocks it touches, but if it touches the bottom of the playing area you lose a life. Your aim is to destroy all the blocks, but if you lose all your lives the game ends.

While it starts out with basic Breakout gameplay, like many clones Meteor soon introduces all sorts of new elements such as blocks that drop bonuses when they're destroyed (which can change the shape of your bat, let you shoot missiles, make the ball extra-destructive, speed the game up, slow the game down etc). There are also blocks that behave in a strange way, for example some require a certain number of hits before they disappear, while others will explode and destroy nearby blocks. To add to the chaos, some levels also feature spaceships which drop bombs on you, and they have to be struck several times before they disappear.

The bonuses aren't always beneficial, for example few players would want a bonus that shrinks the bat, and part of the charm of the concept is that you often have to avoid a bonus while still trying to hit the ball. At other times, a bonus will be dropping on one side of the screen while the ball is on the other, and you find yourself torn between them. Most bonuses are cumulative, so for example if you get the power ball and magnet they will both apply simultaneously. 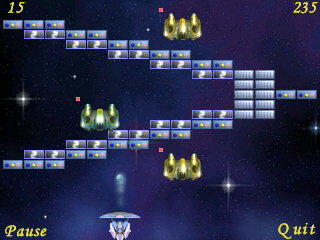 Meteor has three skill levels which affect the initial speed of the ball and how many lives you start out with, and you can also jump ahead to later levels if you don't want to start from the very beginning. There are 90 levels in all, and they get tough fairly quickly, so there's plenty of gameplay here. The controls are smooth and responsive, so if you miss a ball it really is your fault.

The game has an autosave feature, so if you exit at a particular level you can re-enter the game at that level when you next start a game.

One very strange thing about the gameplay on Meteor is that when you die you're taken straight to the title screen. There's no "game over" message, no pause, no acknowledgement that you've invested 20 minutes in playing the game, you just get dumped on the front page as soon as the life counter reaches zero. This feels a bit disconcerting, as you almost wonder whether the game has crashed. 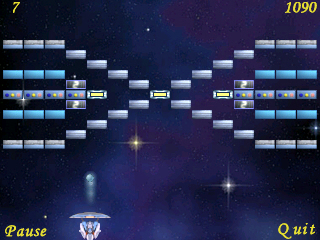 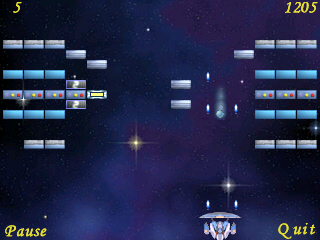 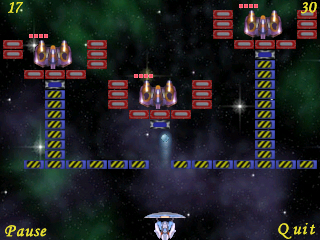 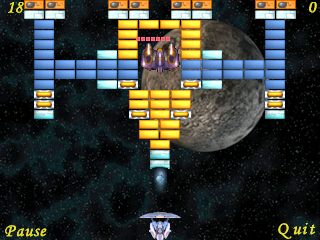 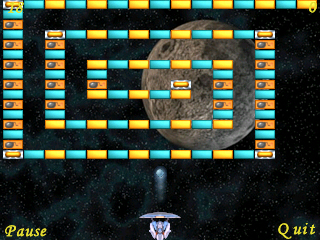 The graphics in Meteor are perfectly adequate, they feature clearly-drawn blocks and spaceships, and some space-themed photographic backgrounds. The ball moves smoothly with a pleasant comet-like tail of gas trailing behind it, and explosions (when you're hit by a missile or you destroy a UFO) look spectacular. The unusual curved design of the bat makes a lot of sense, as it gives you an idea of how the ball will move when it hits different parts of the bat. The font used in Meteor seems to have been taken from the cover of a Mills & Boon novel, which is a bit odd for a sci-fi themed game.

The QVGA version of the game works in both horizontal and vertical mode, and the game should work on all resolutions of S60 3rd Edition (there's a special separate version for the E90 which also uses the entire internal screen).

The sound in Meteor isn't great. What's there is okay (speech samples saying what kind of bonus you just got, the sound of the ball bouncing, explosions) but there isn't much. There's no music at all.

Perhaps because of its long gaming heritage, Meteor suits being on a television screen really really well, particularly in horizontal mode. It's very great fun to play Meteor on a TV, brings back lots of memories of the good old days of 8-bit and 16-bit computers and consoles.

The Bluetooth keyboard we tried also works well. Because Meteor only really requires controls for left and right, the keyboard's arrow keys are completely up to the job, and add to the sense of playing a classic computer game.

As a clone Meteor is fine, it plays smoothly and there are lots of levels and bonuses. If you want Breakout/Arkanoid on your S60 device, Meteor does the job well. The game is inherently addictive, even after several decades and countless versions.

However, Meteor hasn't really been altered significantly since its first release three years ago. If you're bored of Breakout clones then there's nothing radically new here to draw you in.

PS: You can see a gameplay video of Meteor in action over on the Unofficial Nokia Gaming Blog.

The game reviewed here was the S60 3rd Edition version of Meteor. It was reviewed on a Nokia N93. It works in all S60 3rd Edition screen resolutions, though you need to download a separate version for the E90's internal screen (see below). It is also available for other Symbian platforms including UIQ3, UIQ2, S60 1st/2nd Edition, Series 80 and Series 90 (the Nokia 7710).

You can buy or try Meteor at the links below, just click on the version you want to be taken to its download and purchase page: