AAS takes a look at Lonely Cat Games' classic Mau Mau in the light of Uno's renewed fame on the Xbox 360.

Uno by any other name... 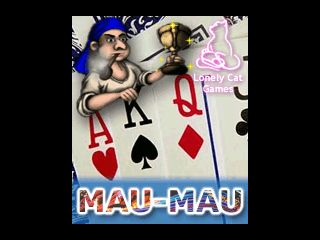 Mau Mau is a card game and card games are ten-a-penny on smartphones, but what people may not realise is that Mau Mau is almost identical to the extremely popular card game Uno. Uno has recently been enjoying something of a renaissance thanks to its appearance on the Xbox 360 game console's Live Arcade service, which lets people buy and download cheap simple games onto the console.

Uno has officially been around for over 30 years but it derives from an even older family of card games with very similar rules, and one of Uno's cousins within this family is a game called Mau Mau. Even within Mau Mau there are many rule variations, but this article will concentrate on the Lonely Cat Games title featuring their own interpretation of the rules. LCG may be more familiar to readers as the developers of the excellent video conversion and viewing utility SmartMovie and the email app ProfiMail, but as their name suggests they've also been a games developer as well.

The software reviewed here is Mau Mau for S60 3rd Edition, but you can also get it for all other Symbian varieties including UIQ 3, S60 1st & 2nd Edition, UIQ 2 and S80 Communicators. The device used to run the software was a Nokia E61. 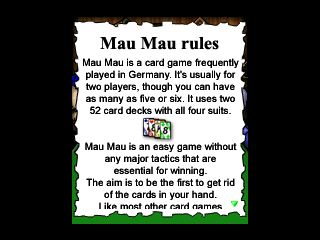 For the benefit of the millions of Uno fans out there it's worth going over the rules of Mau Mau, partly so they can see just how similar the games are, but also so they can tell which cards in Mau Mau are the equivalent of Uno's special cards:

- Each player is given seven cards from the pack (you can alter this from the game's options menu).

- Players take it in turns to try and lay down a card, but they can only do so if they can match the number or colour of the card currently on the table.

- If a player cannot lay down a card, they have to take a card from the top of the pack, but if the card they take can be laid down then they may do so immediately.

- Play starts when a card from the top of the pack is laid on the table.

- The winner is the first person to get rid of all their cards.

To spice things up, there are a number of special cards which the players may choose to use. Mau Mau contains equivalents to all of the special cards in Uno except the +4:

Jack: A player can lay down a Jack on top of any card except another Jack. When they do lay a Jack down, they can change the suit currently in play.

Ace: If a player lays down an Ace, the direction of play is reversed. 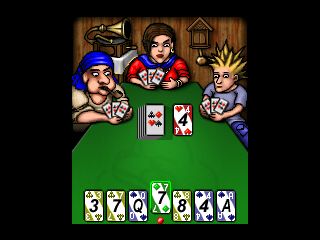 This version of Mau Mau uses a tournament system where several rounds are played until a winner is determined. At the end of a round the values of the other players' cards are recorded every time they lose (2 to 10 are counted at face value, Jacks count 20, Queens count 3, Kings count 4, Aces count 11). If the last card laid by the winner is a jack, the other players' points from the round are counted twice, so if someone has a 9 left they have 18 points added to their total.

If a player accumulates over 100 points during the tournament they're knocked out, and play continues until there's only one player left who is declared the winner of the tournament. The amount of points needed for a knockout can be altered from the settings menu.

If you're knocked out you have the option of starting a new tournament or just sitting back and watching who wins out of the remaining computer players.

Bad Cover Version? Not at all, it's very good in fact 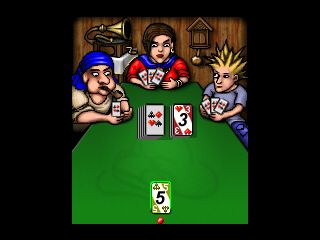 Most card games just show the cards and not much else, but Mau Mau gives us a lovely graphic front end for all the action to take place in and a well crafted user interface for the game itself. LCG clearly playtested Mau Mau properly before releasing it, and it serves as an example of how even cheaper simpler smartphone games should be before they're considered ready for a commercial release.

The interface itself is well done, your cards are laid out clearly and the suits have been brightly colour-coded to make them easy to distinguish (they also add to the Uno-esque feel of the game). Commands can be issued with just one or two movements of the direction pad and the game moves along quickly because of it. The card highlighter automatically jumps to the correct card if it's the only one that can be played, a nice little touch that adds to the streamlining.

There's an options menu which can be reached by pressing either soft key, which includes a built-in manual (if you forget the rules) and various settings including the music volume and effects volume. You can also decide the number of cards dealt at the start, the number of points you play up to before knockout (from 100 to 500) and the number of other computer players.

If you press the red End Call button, unlike most S60 3rd Edition apps it will switch tasks rather than kill the application. You have to exit the game from the options menu in order to close Mau Mau. Exiting through the options menu automatically saves a game currently in progress, which can be continued when Mau Mau is next started. 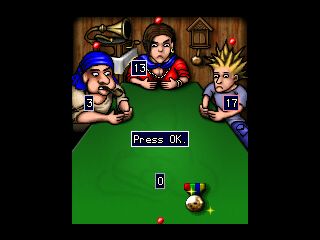 The graphics aren't overwhelming but they're nice and quirky. The other players have expressions that vary depending on what's happening, and as you play there's a subtle series of animations every now and then (gramophones turning, cuckoo clocks opening etc). There are animated sequences when the cards are dealt, but if you click the direction pad's button it jumps straight to the beginning of the game. The main problem with the graphics is that they're 176 x 208 pixels even if you have a higher res screen, it would have been nice if a larger version of the artwork was available to fill the screen of a more up-to-date model. I didn't find it a huge problem but some people will get annoyed by this.

The music in the background is unobtrusive and suits the dark surreal mood. The sounds are good and each player has their own way of expressing delight when they get down to one card.

Mau Mau is a great way of filling in time, it's fun to play one round and it's fun to play a whole tournament. It's so quick to get started that it's ideally suited to being used at a moment's notice in waiting rooms, queues etc.

PS: You can see a gameplay video of Mau Mau for S60 3rd Edition over on the Unofficial Nokia Gaming Blog.