It's one of the most complicated Underground railways in the world, with over 400 miles of track, 200+ stations and an average of 2.5 million journeys made every day. For sure the London Underground is complicated, but can this little Java app make any sense of it?

Unfortunatly, I have problens with this application from before I downloaded it. Rather than have a simple download link, you need to register yourself with the website, along with youe name, address and telephone number.

From that, you get a bookmark sent via SMS to your phone. Use that from inside your WAP Browser to (finally) get the download link to install the app into your phone.

For a start that's way too many hoops. I'll (just about) stomach the registration, but then loosing the choice of install method... don't like it. And this over the air download means I don't have an archive on my PC if anything happens (well, that's not strictly true... - innocent Rafe).

So we've got it into our phones. Starting it up loads to a very pretty splash screen. And then we get presented with Chalfont and Latimer, in the top left of the Tube Map. Every time you open the app. Given I live on the other side of London, and work in the Deep South, the fact that your location isn't saved is annoying.

Intuitivly, your joystick moves the map around... at a very slow scroll rate. There's no option to speed up the scrolling, so you're going to get very familiar with the Metropolitan line you constantly have to move through.

The map itself has two sizes. The first is zoomed in too far, so you have no idea of the overall layout and where you could go. The second size shows the entire tube suystem that takes up the whole 176 pixel width of the screen. Now it's too small to make anything out, so that's just as useless as well.

Which sums up my frustration. The last map function is "find station" which is a long winded scroll through the 200 plus station list, only helped by the fact you can choose the initial letter.

And for a computer tube map, it is criminal to not have a route finding function! Every tube map app I've seen, on the Palm, the Pocket PC, the Windows desktop, heck even the original Psion Series 3, has an "I'm here, get me there!" function.

The One Good Thing

Yes there is one good thing about this app. It allows you to go online (via your WAP connection) to get the latest news on delays and stoppages on the tube system.

Of course you can go direct to that Wap page from your Wap browser (http://orange.lu.tflwap.gov.uk/ltu/wml/news.jsp?js=Pfd31XEppYAjPoQQ&seq=18 if you can't navigate to it). So really this doesn't offer anything useful or flexible either.

But Isn't this a Good Attempt?

The download smacks too much of user tracking - if this app is getting over 100 downloads a day, someone is getting a whole load of confirmed active mobile numbers for purposes unknown. You don't have a simple way of getting a backup copy of the application, and...

...it stops working after it has run 25 times. What good is that!?! So I've got to download it again? Nope, because I've already downloaded it. So I need to write an email to a suit in London Transport asking for permission to get it again?

Ominously, the app is labelled as a Free Trial version, before a full release app in the summer. With all those Free Trial signals, I'm wondering if this is a sneaky way of doing a mass beta test and a list of people to spam for the whole (purchasable) app. 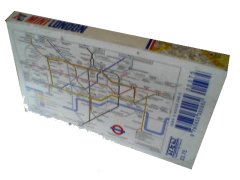 So we've got a nicely packaged jpeg viewer. It's nothing fancy, but it promises so much. Develop this a bit more and it could be genuinely useful. At the moment it's a curiosity with too many flaws in the thinking and delivery system. Personally, I'd stick with the Mark One Map (see right), which has all the features you'll ever need, plus all the streets of London, visitor attractions and Train Stations featured as well.

24% - needs a radical rethink just to get it up to average - and a serious look at the problems people have had downloading it and the restrivite practices it uses.