Li-Nuggz is a modern remake of the classic Cannon Ball / Bubble Buster / Pang genre, where you have to split bouncing objects and avoid being squashed by them. Will it have you bouncing back for more, or will you just want to split? 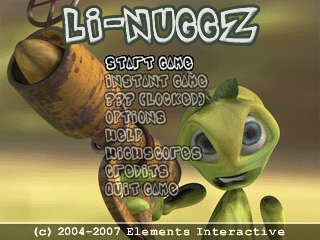 Way back in 1983, the Japanese company Hudson Soft released a game called Cannon Ball for the MSX home computer (it was also released on the Sinclair ZX Spectrum as Bubble Buster). The idea was to split bouncing bubbles again and again until they disappeared, with your character moving back and forth at the bottom of the screen trying to avoid getting squashed. (The same Hudson Soft released a version of their popular Bomberman game for N-Gage many years later, and this too was originally published on the MSX and ZX Spectrum in 1983.)

Cannon Ball was unofficially remade as an arcade game called Pang in 1989, and now another unofficial remake has appeared for smartphones called Li-Nuggz, which is what we're reviewing here.

The version we're reviewing is for S60 3rd Edition devices, but there are also versions for UIQ3, S60 1st/2nd, and Series 80. 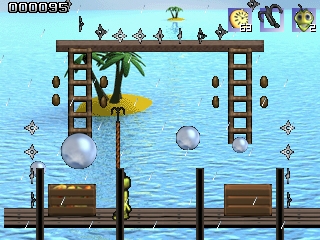 Here's the plot if you want it: You are Li-Nuggz, a magical creature that grew from a small apple, who now has to fight a dragon called Drago who has invaded your home island.

As stated above, the basic aim is to split various bouncing objects into ever-smaller pieces without getting squashed by them. To help you, you have an unlimited supply of spears which will split any object it comes into contact with, and you can collect various bonuses including weapon upgrades, object freezers, bonus points etc. You have three lives (it says 2 on the screen but you're still alive at 0) and a set time limit to clear each level, which may or may not involve climbing ladders, jumping on platforms and using lifts. You can jump up, left or right, and you can assign all controls to whatever keys you want, so you should be able to find suitable combinations for any phone model.

There are several game modes:

This is accessed by clicking "Start Game", and takes you to the main multi-level mode where you have to make your way across a Super Mario Bros-style level map of your island, starting in the docks and ending at the volcano. Each point on the map represents a level you have unlocked, and a level can be visited or revisted by clicking on its dot. You can unlock more levels by going to the last dot on the current line. Levels stay unlocked even when you die. You can also unlock a secret hidden option on the main game menu by collecting enough "feature card" bonus items. 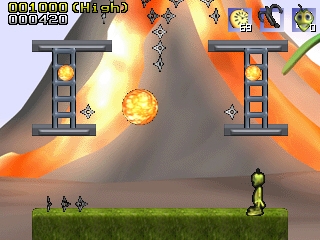 These modes are meant for quick bursts of gameplay, the goal is to beat your previous best score on that level. They also serve as very good training levels for the main game, because they tend to concentrate on one particular skill. "Feature card" bonuses found in the instant games also count towards unlocking the secret menu option.

Marathon - This is a very simple mode, and closest to the original Cannon Ball game, just you and some bouncing bubbles which you have to clear, one level after another.

Skyscraper - Rather than bursting bubbles, this time you have to climb ladders and platforms before the time runs out, collecting treasure as you go. The more treasure you collect within the time limit, the higher your score.

Endurance Test - Similar to Marathon, but with treasure to collect and different kinds of bouncing objects including various types of fruit(!)

Gold Mine - Perhaps the simplest mini-game, just jump around platforms collecting as much falling treasure as you can before the time runs out. 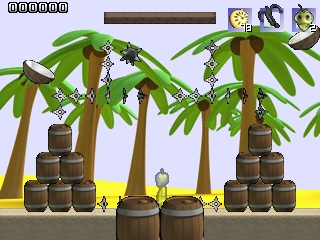 Hot Tour - Again, similar to Marathon, but with huge balls of lava threatening to squash you and more complex levels including ladders and lifts.

The main thing that strikes this reviewer about Li-Nuggz is that it's quite difficult! The idea of the game is simple, but as you split larger objects you end up with far more smaller objects any one of which could kill you, and the screen can get quite crowded and complicated to deal with. The small number of lives and the strict time limit are also pretty unforgiving on the beginner, although you do get better as time goes by, and on the main game mode the levels do stay permanently unlocked so at least you never have to re-do a level.

One criticism this reviewer would make about the gameplay is the difficulty of jumping. The skyscraper mini-game was one of the most frustrating parts of Li-Nuggz because it was very tricky to get from a platform onto a ladder, or from a ladder onto a platform. The three-directional jump controls feel a bit clunky, perhaps there should be one general jump button which takes its direction from the d-pad, as there is in most platform games? 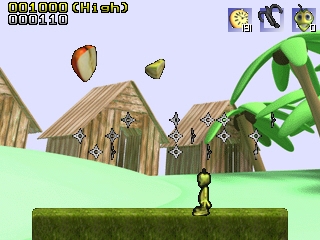 The developers Elements Interactive clearly wanted to do something a bit different with their approach to Li-Nuggz, and the graphics and sound certainly have a distinctive look. The backgrounds are pre-rendered 3D stills with a very simple and shiny appearance, but they're nice enough and they don't interfere with the gameplay.

The in-game music is similar to the typical synthesiser soundtrack found on 1980s arcade games, which is perhaps appropriate as this is something of an unofficial sequel to Pang. The sound effects though are a case of love-them-or-hate-them, being made up entirely of a person doing funny noises. It's a novel idea, but this reviewer found it pretty annoying after a while, though of course tastes may vary.

Li-Nuggz works absolutely fine on a television, and looks pretty good too although the main character's sprite looks very blocky.

The keyboard works fine too, and because you can customise the controls in the game you can choose keys that suit your keyboard. 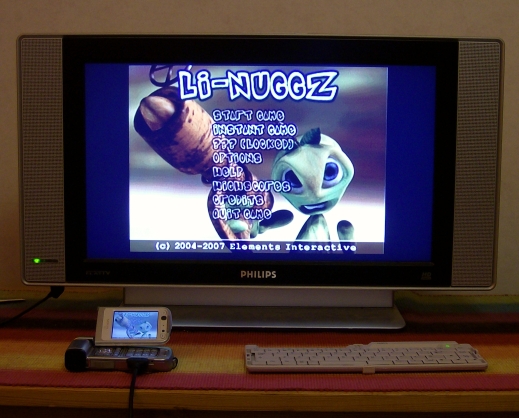 Li-Nuggz gets difficult pretty quickly, you need to concentrate hard to clear each screen, and trying to co-ordinate this with gathering treasure, jumping on platforms and climbing ladders is very tricky, especially with so few lives. However, the levels do get permanently unlocked once you finish them, and the Instant Games let you tackle one kind of gameplay at a time so you can practice in the areas you're weakest in, or just have fun with the style of gameplay that you enjoy the most.

The graphics are simple but do the job, the music is appropriate to the genre, but the sound effects definitely need changing. Fortunately the game includes separate volume controls for effects and music, so this isn't a great problem.

If you enjoyed Cannon Ball/Bubble Buster or Pang, or if you generally enjoy challenging and fast-moving arcade games, then you should give Li-Nuggz a try.

PS: You can see a video of Li-Nuggz in action over on the Unofficial Nokia Gaming Blog.

The game reviewed here was the Symbian S60 3rd Edition version of Li-Nuggz. It was reviewed on a Nokia N93. The screenshots are taken from the horizontal QVGA version, but the game is also available in a vertical QVGA version.

You can buy Li-Nuggz for S60 3rd Edition from this link.

There are also S60 1st/2nd Edition, Series 80 and UIQ3 versions on the same site.