Invasion is a Real Time Strategy game set in the ancient world for S60 3rd Edition smartphones. Is it more fun than cutting down the tallest tree in the forest with a herring? 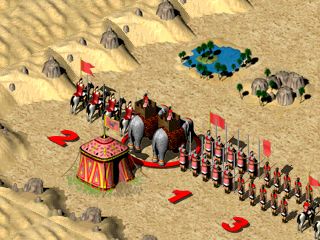 Invasion is a Real Time Strategy game which takes place on a simplified map of Europe, the Middle East and the north coast of Africa, and has a sort of ancient Roman theme (although no actual countries exist in it).

The player starts in a province of their choice, and sends their army units to occupy neighbouring provinces hoping that the units will be strong enough to fend off other invaders. The ultimate aim is to occupy every province on the map. Provinces are taxed and can be developed through a small number of civilian and military improvements, for example marketplaces, stables, archery schools etc.

If a foreign power has already occupied a neighbouring province, you can attempt to conquer it by sending army units there. When army units from two different powers meet in the same province, the Real Time Strategy part of the game starts up and the two armies fight in real time on a battlefield appropriate to the province (for example the African provinces feature sand dunes and oases, the central European battlefields have lush green forests and rolling plains of grass etc). Whoever wins the battle gains the province as part of their empire.

Or at least that's how it's supposed to be.

Where am I? What does this button do? 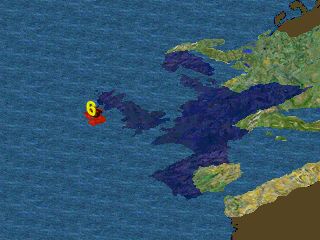 In fact the first thing that you'll notice if you install Invasion is that you have no idea what's going on, what you're supposed to do or how you're supposed to do it. There's a complete and utter lack of documentation, tutorials or in-game help, and to add insult to injury the developers and publishers PocketTorch say on their support boards that they don't produce documentation for their games.

This is like a train company saying they don't produce timetables or maps for their rail services: you could still use their trains, but you won't know how to do so except through trial and error. While you can just about get to know your way round Invasion after playing it for long enough, I doubt most people will persist, especially as the game itself isn't very fun to play, especially the Real Time Strategy section.

RTS games are at their best when played on a PC-sized monitor using a very flexible instantly selectable control system such as a mouse or touchscreen, but Invasion runs on a portable device's screen with a joystick or joypad. Even worse, the view of your units is far too zoomed-in, and it's impossible to zoom out except to a very simplified map. You can't possibly keep track of what's going on, and can't know which units need new orders or help from other units, so battles rapidly turn into random chaos. It's actually about as much fun to just let the battles resolve themselves automatically, because any attempts you make to try and implement a strategy are unplayably fiddly. 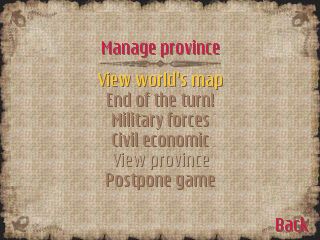 Even ignoring the problems with the user interface, the RTS isn't even very interesting: there are just six types of units and no upgrades or customisation options. The "orders" involve just moving the units from one place to another on a chosen route, and they have no artificial intelligence short of attacking the first enemy they run into. The enemy AI also seems a bit odd, some of the enemy units would walk round in circles for a while instead of attacking or waiting to be attacked.

Because there's very little gameplay outside the RTS battles, there's just no fun to be had from Invasion other than manufacturing as many military units as you can and hoping they'll outlast whoever they're meant to fight. The governing of the provinces does involve a very small amount of Civilization-style city management, but it merely consists of changing the tax rate and selecting which improvements to build in whichever province you're looking at (there's 6 civilian and 5 military buildings available).

At least it looks good... 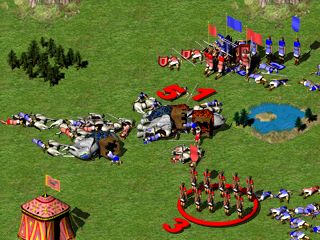 The tragedy of all this is that there's a lot of talent being wasted on Invasion: the graphics are absolutely wonderful, excellently detailed and varied, with animation for all the different soldiers as they regroup, march and fight on the battlefield. There are also some nice little touches: when soldiers or animals die, their bodies remain behind on the battlefield giving the whole thing a more tragic feel. The views of the cities in each province also look good, with architectural styles appropriate to their province and new buildings added as the population expands and improvements are made. Even the sound is fairly nice, although it does get a bit confused sometimes during battles.

But the developers and publishers PocketTorch have repeated every mistake they made with their equally good-looking previous game 4Elements (click here for AAS's review), they've put great audio-visuals and a great idea into the game but messed it all up because of no instructions, frustrating gameplay and no sense of the game being finished.

Invasion plays even worse than 4Elements, and there's some in-game evidence that Invasion was never properly playtested. This screen appears if you exceed your budget: 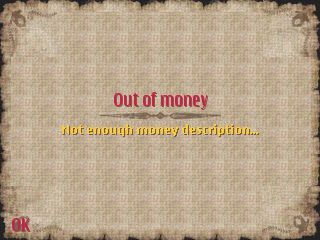 ...but graphics don't make a game

If PocketTorch are serious about making smartphone games, and you'd think they are, judging by the excellent graphics, then they have to playtest their games properly and provide enough instructions so that people can start playing the games straight away. They also have to make an interface that makes sense for the battles, either by abandoning RTS and switching to turn-based gameplay, or making it much easier to keep track of what's going on. At the moment they're wasting their time, and ought to concentrate on getting one game right rather than many games wrong.

Invasion feels more like an early Beta test game than a finished product, and I would not advise anyone to get it in its present condition. The developers seem to have spent all their time and money on making a game that has good screenshots but which plays like a jigsaw with half the pieces missing.

Quite why PocketTorch has released two such badly implemented and poorly supported games as 4Elements and Invasion is a mystery. The same company brought us the excellent AquaCalendar, which recently won AAS's award for best S60 3rd Edition calendar app. They clearly know how to make good apps that customers find very easy to use, so why are they producing bad games that are very difficult to use?

The device used for the review was the Nokia E61. The game reviewed here was the S60 3rd Edition version, but there are versions of Invasion also available for UIQ 3 and S60 2nd Edition.