Hearts is a rather gentle card game, with hints of Whist and Bridge in play (it’s Trumps based) and a twist on strategy. The key is to not win hands with hearts in them – hence the name. It’s gained a certain favour in the last ten years or so mainly because it is one of the bundled games in Microsoft Windows. I’ve always seen it as a simple game, one that can be played rather quickly, but there is a huge number of people out there that regard hearts as a perfect mix of speedy play and strategy.

And then there’s ZingMagic – rather like slipping into a comfy pair of shoes I know exactly what to expect from their interface, where to find all the options, how to set up the computer AI, so this was a package that I was completely at home with in very short order. 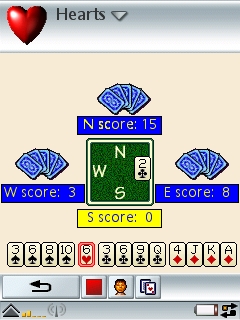 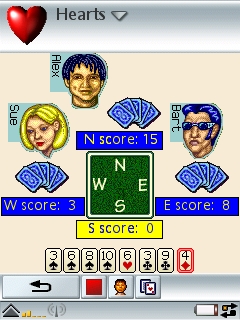 Part of this is because, while many applications go through a few versions, Zingmagic have been pushing out these classic games since before the turn of the century, so not only has the interface gone through many tiny tweaks through feedback from countless users, but the AI used has also been polished. What’s nice is not that you have a 'killer' smart AI (which you do), but that you also have lower levels of AI skill that are nice to play against – they’re not killers, they don’t slaughter you for a single mistake, it’s rather like playing a social game around the kitchen table with family (but if you want to be put to the sword in short order, that can be easily accommodated). 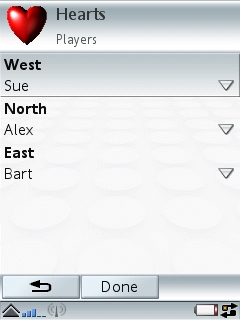 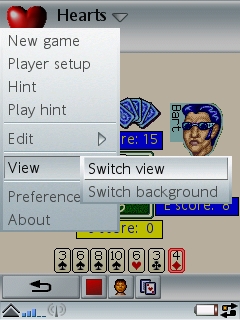 The interface itself follows all the style guides of UIQ - if you know how to work the menus and icon strips of the built in applications you'll  be at home in Hearts. Given that all your cards are on display, a simple tap on the cards will play them - it's as simple as that. Compare this to the cursor based controls that you would be using on a S60 device and, while the game-play is the same, there's a fluidity and naturalness to playing a card game with a stylus.

It's interesting that you can still use the left/right cursor keys on the keypad of the P990 to move the red highlight, and the spacebar to play a card, and there are some circumstances where this will be preferable to the stylus (such as on public transport). While I feel it's probably there to allow the same code to be used on multiple Symbian devices, it is nice to have the option to use either.

New players to ZingMagic products may be a touch disconcerted by Hearts taking you straight to the game screen – no setup, no menu, you’re presented with the game screen straight away. With the much wider user base on Symbian phones compared to even a few years ago, I’m wondering if the time for an optional start-up tutorial has arrived - to explain the idea of the named computer players, setting the difficulty, and generally doing a bit of an introduction.

But that’s just a tiny part of the experience; once you’re into the game you’ll find a well polished, balanced card game that is recommended to fans of the genre. It’s presented well; it understands that it is on a mobile device; and it’s fun to play.