Launched at the 2008 Symbian Smartphone Show, Samsung's i7110 drew a lot of admirers. But getting past Steve Litchfield's high standards will take some doing. Has the i7110 got what it takes? This is part 1 of a two part AAS review. 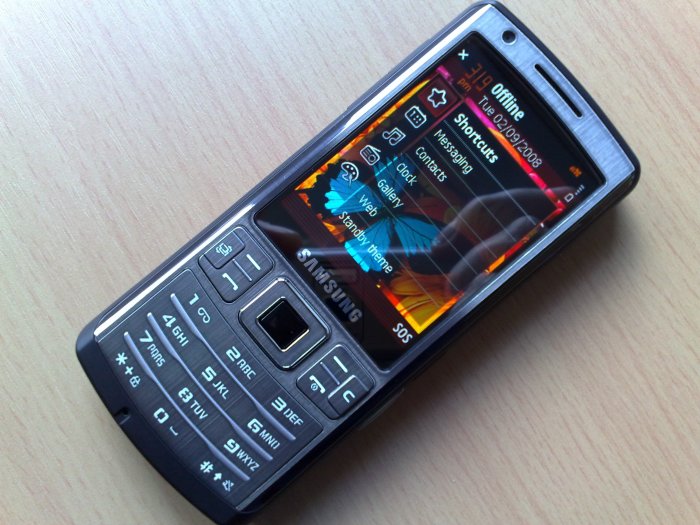 There's no getting round it, first impressions of the Samsung i7110 are awesome. Awesome. A slim metal chassis (118 x 52 x 12.9mm). Brushed metal battery cover and front fascia. Rubberised, hi-grip coating elsewhere. A gorgeously gorgeous (have I mentioned that it was gorgeous?) OLED 2.6" screen. Optical joystick.

Plus the usual 2009 specifications for a top end phone/smartphone: 5mp cam with dual LED flash, VGA video recording, Wi-Fi and GPS. What's there not to like, in this candy bar format that should prove more robust than anything else on the market?

But before you get carried away, it's important to note that there are some huge issues to be overcome before we're able to judge the i7110 fairly, at least in terms of its long term potential. Let me quote from the script for my upcoming Phones Show programme 70:

"The problem is that these devices aren't Nokias. Don't get me wrong. I'm happy for them not to be, but currently they're certificate-locked out of most of Nokia's free add-on software and services. So no Nokia Maps, no Sports Tracker, no Podcasting, no Internet Radio, no Share online, and so on. All of which I could live with, finding some kind of alternatives (Route 66 is built-in, for example, plus there's RSS handling in Web, Shozu for uploads, etc), but there are wider compatibility issues too. S60 YouTube clients emTube and Mobitubia didn't work properly on the two phones, while my staple Handy Safe wouldn't sync between desktop and phone because the affair wasn't using pukka Nokia PC Suite. Most games were fine, by the way, proving that these two phones have plenty of graphical potential to be tapped.

Then there's the question of support and updates. We're so used to Nokia providing semi-regular do-it-at-home firmware updates - the complete absence of an equivalent utility or over the air update server from Samsung comes as a huge shock.

Now, it's early days, as I say. Samsung (and the developer community they want to engage) know full well what they have to do in terms of catching up in all these areas."

But enough of what I/we can't do with the i7110. There's still plenty I can photograph, prod, test and explore...

The OLED screen, as on the Nokia N85, is something of a revelation. You don't get the same 'lit up time' power saver as on the Nokia, but otherwise the colours and contrast are just as attractive. True, there are some technological question marks over the longevity of OLED, but in the meantime we're all going to just sit back and enjoy it. In all conditions other than 100% direct sunlight, OLED is superior to traditional transflective and TFT screens.

The d-pad and control cluster is interesting and, arguably, somewhat flawed. The central optical joystick, first seen on the INNOV8, works well in Web to give analogue, mouse-like control, but rather gets in the way the rest of the time. Quite often you'll click down on the d-pad centre to select something and your finger will move a micron as you press, resulting in the item above or below being selected instead. The optical joystick can thankfully be turned on and off, although you do have to delve into Settings each time, which is a hassle. The outer ring is fine, with a nice positive action.

More worrying are the outer control keys, with the App/Menu key being raised over the left function and call keys - this I can just about live with, since it's not the end of the world to go back to the menu when trying to do something - and with the 'C' button being raised over the right function and hang up keys - this is potentially more dangerous and has resulted several times in me almost losing something important through aiming for the right function key and the 'C' key getting mashed first. Simply, the key raising is poor design,  given the angle at which most people's thumb will be approaching the right function key, i.e. reaching over the 'C' key. Grumble.... 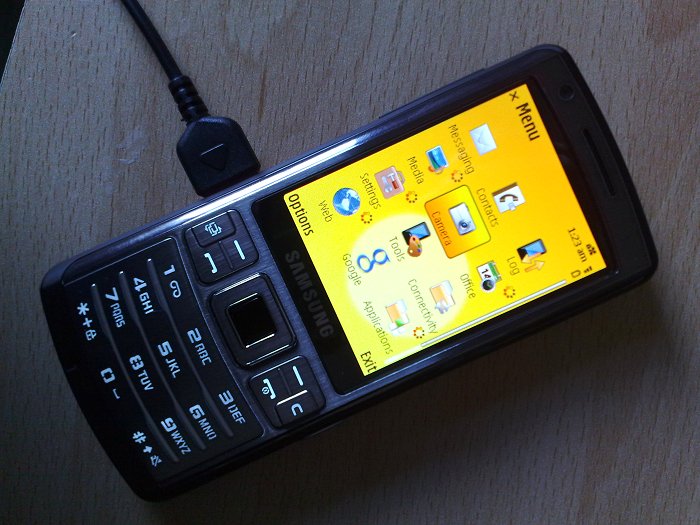 The keypad's one sheet of thin metal, but the action is nice and positive, with a definite click as each press is made, with clear spacing and with the bottom row of keys not too close to the bottom of the phone. Full marks on this account.

By the way, you'll notice my Sunrise theme applied in the photo above. The i7110 (and the INNOV8) ship with a truly horrible set of stylised icons as part of their standard set of three Samsung themes. I guarantee that the first thing any informed owner will do is put on a theme that's brighter and clearer. And, after all, don't you want to show off the OLED screen better?.... 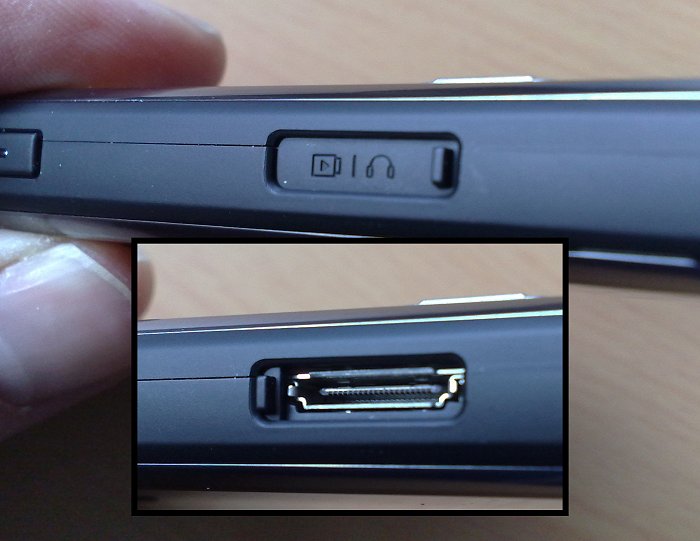 Around the rubberised outside are a sliding hatch, shown above, for the proprietary Samsung connector - this services USB, audio out and charging, so it gets plenty of use. I'm torn on these connector designs - on the one hand, there are less ports around the outside of the phone - on the other, it means that accessories from other sources won't fit. Either way, it's a factor to be taken into consideration.

Next up the left side are up/down buttons for call/music volume and camera zooming. These are really well-sized and easy to press - which is a slight problem as they get pressed a lot of the time by accident.

Down the right hand side are a microSD slot, with tethered cover, a custom key and a high quality camera shutter key. Yet again, the prominence and quality of the keys is both a blessing and a curse. A blessing because they feel great and a curse because I keep pressing all of them by accident.

Luckily, the keylock is a bit simpler here than on a typical Nokia S60 phone - here you just press and hold the '*' key from the standby screen. You'll need to use this quite a bit in real life. I also found that the custom key got pressed a lot and so I assigned it to an application that I knew I'd like always running anyway - Music player. Perhaps this should be Samsung's default assignment.... 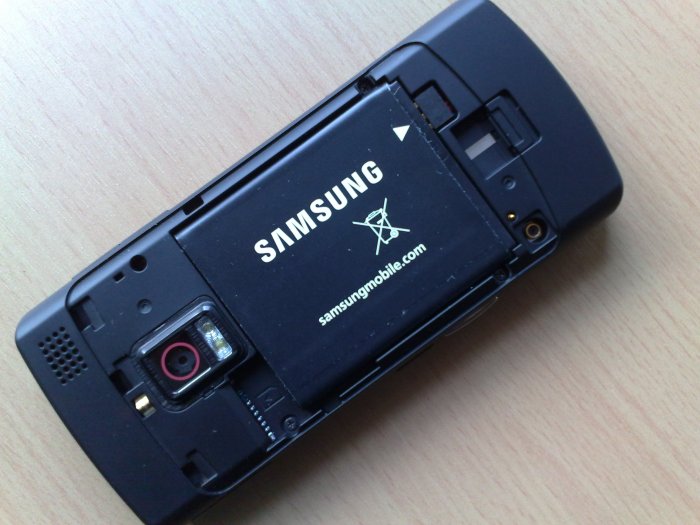 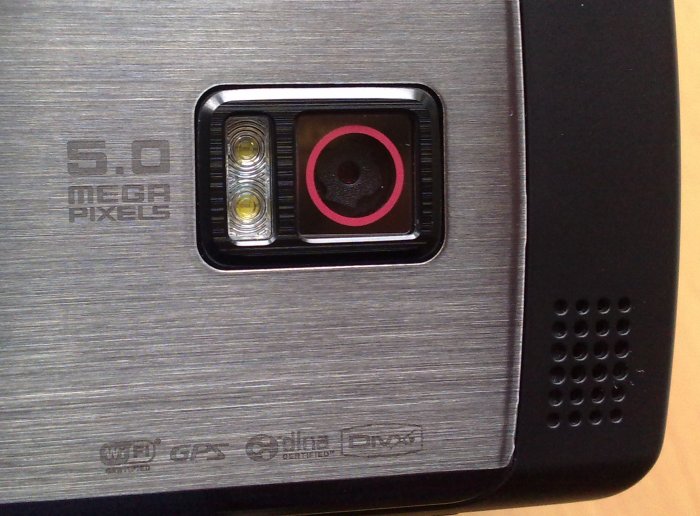 Moving on to the camera, while not the i7110's main focus (geddit?...), as evidenced by the lack of camera glass protection or still/video toggle keys (as on the INNOV8), it's really very good. I did some direct tests against the Nokia N82, a known (and very good) quantity, and the results were very comparable indeed: 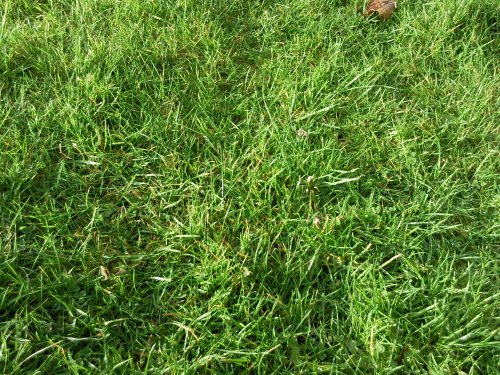 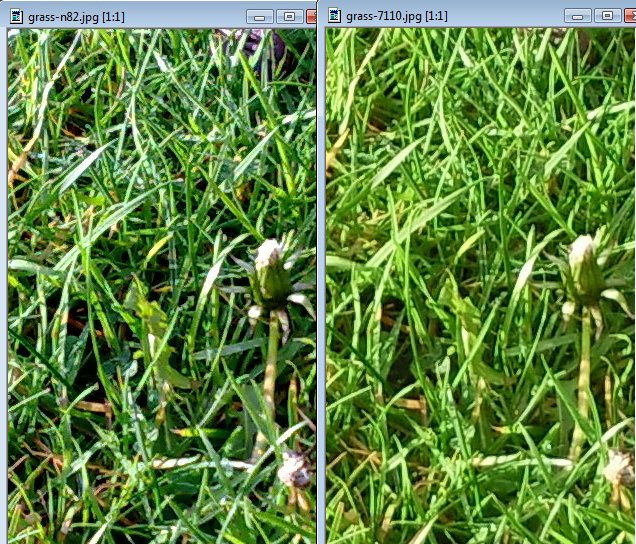 The i7110 perhaps wins this shot, with better, more natural colours. 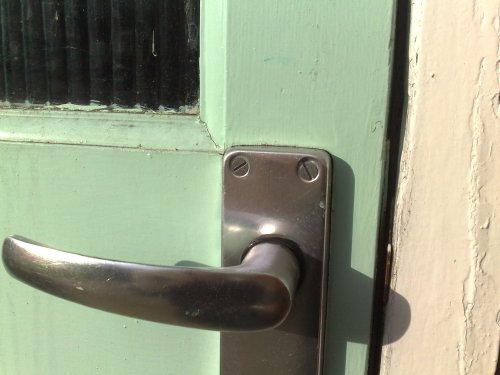 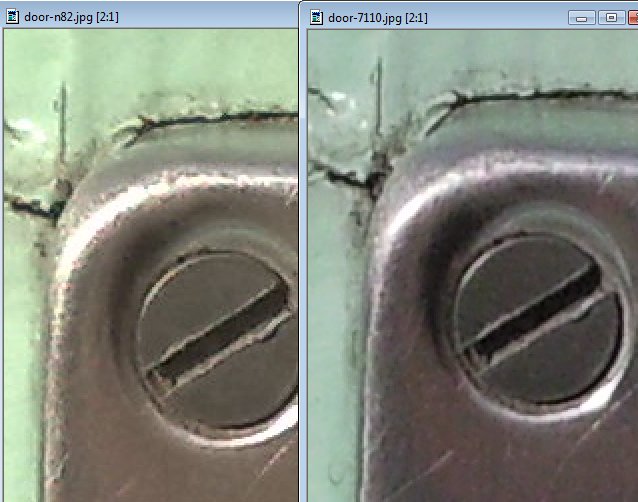 And down at 1:1 level the N82 wins by a small margin, although the i7110's camera is astoundingly good considering that it's not 'a camera phone'

The dual LED flash also worked very well in all but the darkest conditions. For this class of phone, I think Xenon might have been too much. Alas, as with the INNOV8, video capture wasn't as good, with a truly horrible audio/video (lipsync) bug, and, along with the wider compatibility issues mentioned above, forms what I would consider a showstopping flaw. The firmware in the test i7110, bizarrely, was from 3 months ago, I'll submit it for re-flashing over Christmas and will hope to bring you some good news in 2009.

In terms of audio, there's a 3.5mm breakout adapter in the box, so you can (indirectly) plug in your own favourite headphones, which is something. Playback quality's excellent, as usual. Plugging the i7110 into a PC showed that the USB port runs at full speed, up to 6MB per second, I'm glad that phone manufacturers seem to have mastered USB at long last. The main speaker's on the back and is mono, although quite a lot of sound also comes out of the main earpiece, it seems.

Under the hood, the GPS locks on quickly, as you'll see in part 2 in a few days. There's also an accelerometer that's used for auto-rotation of the screen in most, but not all applications and situations.

So, a good start, marred only by some wierd key design and the video sync bug. In part 2 of this review, I'll be looking at the software suite, both S60-derived and bought-in, plus I'll summarise my feelings over the i7110.

Steve Litchfield, All About Symbian, 3 Dec 2008