Now, I'm normally a fan of Bluetooth keyboards - the chance to get text into a diminutive S60 smartphone really quickly when the need arises means that they're a great accessory to keep in your briefcase or car glove compartment. But in order to put up with having a separate input device there has to be a significant increase in typing speed.

Like most seasoned phone owners, I can use predictive text on a numeric keypad with the best of them and I usually manage around 16 words per minute (wpm), which is fine for short messages and Calendar entries. With a full size Bluetooth keyboard, it's quite practical to achieve 40 wpm, even perched on a lap. The Freedom Mini Keyboard only raised my input speed to around 20 wpm and I should say right at the outset that unless you're slow at using predictive text, this accessory may not be the huge benefit you may have imagined. 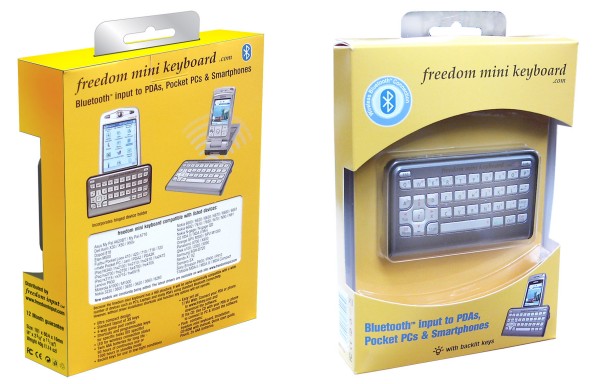 The Freedom Mini Keyboard is certainly an interesting form factor, being the same linear dimensions as a credit card, although it's far thicker than it needs to be. This is partly because it has been designed around two AAA batteries, the thickness of which rather limits how thin the accessory can be. Behind the battery hump on the rear, a lot of the volume is taken up by a gimmicky sprung grip. The idea is to hold your smartphone steady within its clutches, with the keyboard appearing as an over-sized thumbboard, but in practice the pressure of the grip was more than enough to set keys a-pressing on each S60 smartphone I tried it with. Maybe the grip would work better with traditional PDAs with rigid sides and no keys.

The built-in Nokia Wireless Keyboard drivers worked acceptably with the Freedom Mini Keyboard, thankfully, as the supplied Freedom drivers were somewhat erratic, throwing up various errors (and even quitting entirely) after I'd let the Bluetooth connection to the keyboard time out. An on/off switch at the top of the keyboard provides peace of mind as to whether the accessory is on or off, with a Link button activating the Bluetooth discovery mode and letting your smartphone find the device. 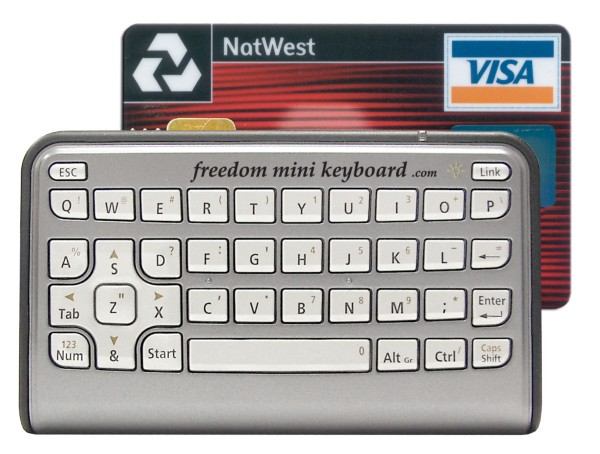 Given the thickness of the Freedom Mini Keyboard, I was disappointed by the extremely limited key travel, reminiscent of a cheap calculator, with a clicky action. Given the number of keys available, I expected some layout oddities, but the use of 'Ctrl' and (most importantly) 'Shift' on the extreme right hand side was very unintuitive. When typing, I experienced unwanted double letters several times, and tweaking the driver settings for auto-repeat didn't seem to clear these miskeys up. On the positive side, the integral cursor control 'diamond' and dedicated 'Esc' and 'Start' ('Options') keys were a pleasant surprise and both worked well.

One novelty (for Bluetooth keyboards) was the presence of a good (red) keyboard backlight, making it a doddle to use the accessory in the dark.

At the end of the day though, the acid test was whether you or I would want to include the Freedom Mini Keyboard when gathering gear for a trip. At most, your input speed will be only 50% more than you'd get from using predictive text and for my money this isn't enough of a benefit to put up with poor key feel, idiosyncratic layout, key doubling problems and the hassles of remembering to carry the keyboard with you and get it connected each time you want to use it. Better to go for something slightly larger and more expensive, such as the Freedom's larger brother, which will let you get close to desktop typing speeds and which you'll enjoy typing on.