Formula 1 racing on your smartphone? Well, yes, but with a few caveats! Read on... 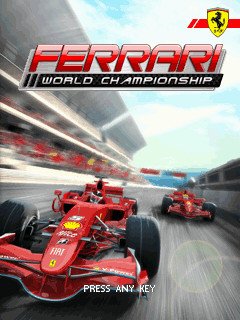 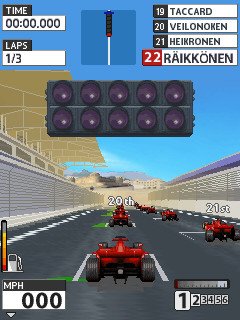 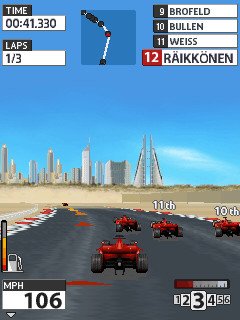 Being both a bit of a Formula 1 fan and a Ferrari fan, I really couldn't resist this. No, we're not talking N-Gage here, this is a Gameloft title that happens to be nicely QVGA and S60 compatible. It's not even listed in Nokia's Download! system, which is bizarre because it plays really well. The buy link here is to ClickGamer's Ferrari World Championship page, which is where I bought my copy.

If you're thinking of PlayStation 3 Gran Turismo 5-quality racing here then think again. This is a Java game and runs (assuming you grab the appropriate version) on just about any phone under the sun. I was trying it on a Nokia N95, benefitting from the good sound from the speakers, the fast Java graphics engine and QVGA screen - I also tried it on the E90 on the external screen and it played fairly well, if a little jerky when there were lots of cars and scene elements on-screen at once. Racing is either from a 'behind the car' perspective or 'in cockpit' - both work well. 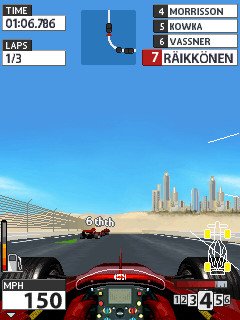 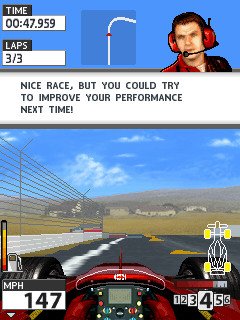 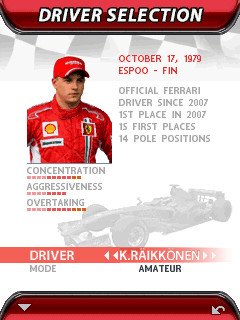 You'll quickly get the idea from the screenshots here, this is a fairly standard car racing game - but Gameloft have done a good job in keeping things as slick as possible and haven't disgraced the Ferrari name. 'Instant race' and 'Championship' modes give you two possible ways to frame your gaming, although each uses '3 lap' races, we're talking quick fix gaming on the bus or tube here, not extended sessions on your sofa.

Car control is just left/right by default, which sounds overly simplistic but there's an awful lot to watch on the screen and the track/action/track view/status messages all fly by at the speed of sound - for casual gaming, just worrying about the 'trajectory' is about right. If you get serious and master the art of winning, try the game in the more advanced mode, in which case you have to do all the braking yourself, which adds significant difficulty.

Despite the speed of the racing itself, Ferrari World Championship does its best to help you, with a colour coded (for braking purposes) 'racing line' overlaid on the track that you can try to follow, plus collisions with other cars and track-side obstacles are gently handled and you're steered in gentle fashion back in the right direction. So there are no violent 'how bad can I smash this thing up?' crashes! 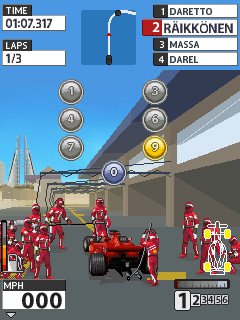 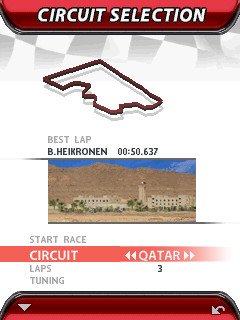 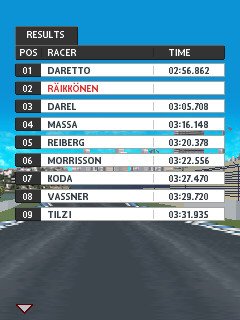 Of course, three laps isn't a lot and, once you're in first place after a lap and a half, you'll think the game's a piece of cake. Ah, but then your tyres blister and you run out of fuel - that's right, you'll usually need to pop into the pits at the end of lap 2 - kind of an ultra-condensed version of a real GP. When you 'pit' is up to you, doing it after lap 1 gives you enough fuel to get to the end of the race without further worries and can be a good strategy. Getting into the pits proved tricky at first, when the icon pops showing the pitlane approaching, you only have a second to mash d-pad right and veer the car away from the main track - you'll find you miss the pits altogether the first few times!

The pitstop itself is interesting in that, in order to power the mechanics into servicing the car, there's a mini-game to play. You have to follow a 'Simple Simon' like sequence as fast as possible, after which your car is sent back onto the track. Where, inevitably, you'll have lost half a dozen places and you'll have to battle to get back to the front. The logistics of cramming two hours of real GP racing into two minutes of gameplay mean that all this is rather artificial - but I found it enjoyably artificial. 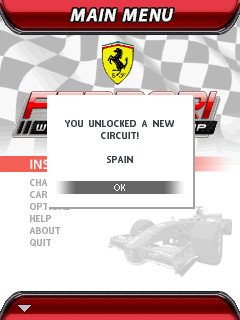 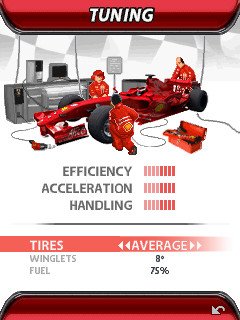 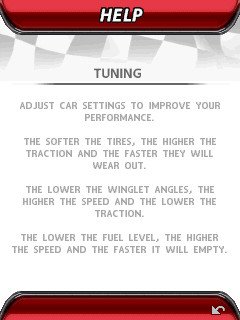 There's extra depth, surprisingly, for a humble Java game, with the possibility of tweaking your car's tyre and wing settings in detail, or deliberately under-filling with fuel in order to gain extra advantage off the grid. To find this sort of modelling detail in this game is welcome and no doubt helps keep things realistic in terms of on-track physics and cornering, despite the forgiving collision mechanics.

In terms of gaming enjoyment, there's very little wrong with Ferrari World Championship. It's very odd that all the opponent cars are also Ferraris - surely a few extra colour schemes, Maclarens, Minardis, Renaults, etc. would have helped keep things more interesting? I also found the choice of soundtrack interesting - there's a selection of pumping MIDI trance music, but apart from the starting light beeps there are no engine noises - I was hoping for a throaty Ferrari roar from my steed. I guess synced digitised engine noise would have been far too much for a Java game.

Whether playing in 'Instant' mode, choosing where to race and gradually unlocking tracks one by one, or in 'Championship' mode, progressing in strict sequential fashion, Ferrari World Championship gets my vote, as one of the most addictive little phone/PDA racing games I've played in ages - after installing, I found I'd played a full four adrenaline-filled races before I'd remembered to take any in-race screenshots - I really was that involved in the challenge. For casual gamers, this is great value.

PS. If (especially in light of the current N-Gage furore) you're looking for a way to get  bought Java games from one device to another (e.g. after upgrading), see my FAQ on this in AAS's Support section.