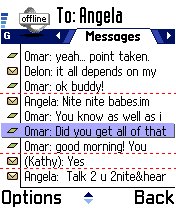 If you have a contract mobile phone, chances are, your network is planning to release an Instant messaging solution for its customers within the next few months. They see it as the "next big thing" as far as money making potential goes.

Having access to some form of instant messaging on your phone might sound like a great idea, but imagine if it was already possible. And at a fraction of the price your network will want to charge you - with the ability to use your existing buddy list and user name to connect to MSN Messenger. It’s beginning to sound even better (but why is my Bank Manager nodding? – Rafe)

There’s been an avalanche of Instant messaging tools released for Series 60 devices lately. Some let you connect to your favourite messaging program, others connect to their own dedicated IM network while a few of them can do both. The latest contender on the block is fastxt (www.fastxt.com) and it works a little bit differently to the rest of the pack.

The major difference with fastxt is that you have to pay a monthly subscription directly to the company in addition to your regular mobile provider. Hang on, don’t switch off and go and do something less boring instead… your money actually buys you a pretty comprehensive service. For Ł5.99 a month you get:

The bit that will no doubt grab most people’s attention is the free SMS. Fastxt are keen to stress that they are not primarily an SMS gateway but you can send SMS to any mobile phone number in the world using the software. Once you run out of free SMS credits (you get 100 free a month for the 1st 5 months and unlimited SMS until April 2003 to entice you to join), you can buy more, in bundles of 100 which work out at 6p per message. The person receiving the sms will get it as if it came from your mobile phone number, and can reply directly to your phone.

The bulk of the service is the instant messaging capabilities. Fastxt allows you to connect to other fastxt members and all of your MSN buddies. Unlike other IM programs it allows you to speak to many "buddies" at once from one screen and reply to individuals in the conversation or the whole group. It doesn’t sound like much, but navigating between contacts in applications such as TipicME and IM+ can be a real pain. You can send as many messages as you like, as often as you like. I’ve been using it so much that I’ve just bought a double life battery to keep the phone going all day!

How much will all this Cost?

Fastxt is not the cheapest instant messaging solution around. Your Ł5.99 subscription needs to be backed up by a GPRS Internet subscription from your network (WAP won’t do). The prices will depend on your location and network. Orange in the UK charge Ł2 per Mb of data used.

One of the benefits of the fastxt software is that is extremely conservative with data and in turn, your bank balance (drat – Rafe’s Bank Manager). A single sms or instant message of average length (160 characters) will take less than 1kb of data to send, which going on my GPRS rates is under 0.2p per sms or instant message. Tipic uses between 1kb and 2kb for each message, making it up to 4 times more expensive.

Many networks are now offering cheap or all-inclusive GPRS data packages; if you are lucky enough to be one of those with cheap GPRS then fastxt is a great value service.

The fastxt software is very impressive. Having signed up to the service you will receive two text messages on your phone. The first of which will connect to the fastxt server to download the correct network settings for your phone, the second will confirm your identity and then automatically download and install the software. Although the application is downloadable via the fastxt site, this method of authentication means that piracy/hacking is almost impossible (but I bet they’ll try! – Rafe). The entire process takes less than 2 minutes and is fully automated; it’s unlike anything I’ve ever seen on the 7650.

Once you open the software it automatically connects to the fastxt sever (this can be turned off) and downloads your MSN, fastxt and SMS contacts. The software will also import all the sms messages in your inbox. It connects very quickly and you’ll be up and running within 10 seconds.

The user interface can be very confusing when you first log in. I was about to uninstall the software when I came across the online manual which explained everything very clearly. 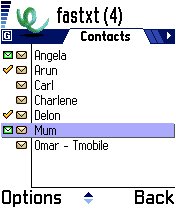 The contacts screen: Here you can see who is online and who isn’t. It also allows you to choose the preferred messaging type for each person (IM, SMS or none). 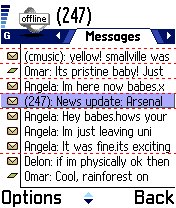 The messages screen: Here you can view all of your sent and received messages on one screen. A dotted red line divides conversations, making sure you don’t get confused and send the wrong message to the wrong person, a potentially fatal mistake! If you chose to import your sms inbox, those messages will also appear here. 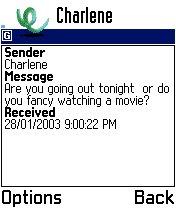 The outbox screen: Does exactly what it says on the tin, all your messages are stored here before being sent. Whilst online, they are sent so quickly, you won’t even see them here. Where fastxt excels is in its use of "offline" messaging. You can type out all you sms/IM messages when GPRS is not connected, and they will be stored here ready for sending next time you log on.

Navigating between the screens is as simple as moving the joystick from left to right. You can also customise the interface by changing the listing orders of the folders to adding a "fun" counter, which lets you know how many messages you have stored at any one time. 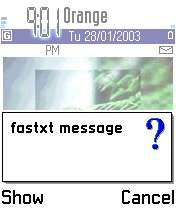 Another area where fastxt improves over its rivals is in its alert of new messages. When someone sends you an MSN message for example, a pop-up box appears on screen if you are not in the fastxt application itself, in exactly the same way the 7650 alerts you to a new SMS message. Other instant messaging programs give no visual indication of new messages, and as such, are a little pointless for "always on instant messaging."

It all sounds pretty good, should I buy it?

That depends on a number of things. Before you buy you should be aware that fastxt isn’t the best tool for cheap SMS, unless of course 6p is more than you currently pay and you already have a GPRS package.

If however you do have an affordable GPRS subscription in your area and fancy some instant messaging action with sms thrown in for good measure, you can’t go wrong with fastxt.

There are little annoyances, mostly SMS related which, as mentioned before isn’t the main aim of fastxt: You have to select a contact and tell the software that they can only receive sms before you can send one. This has to be done every single time and is quite tedious. Incoming SMS messages can be opened and read in the Nokia Inbox, but still show unread in fastxt.

Personally, I’d like to see fastxt make more of the SMS side of things, include MMS support and drop the per message prices. I think there’s more initial revenue to be had that way; most of us want cheap SMS and MMS not instant messaging, at least until everyone has GPRS and Java enabled handsets, at which point they could switch the focus back to IM and faze out traditional messaging forms. The integration of Hotmail would also prove very popular. Maybe I should make my own app!

Where fastxt comes into its own, is if you can manage to gather a group of friends onto the system, and with upcoming releases on a variety of Java enabled phones, that may well be possible.

Consider the pros and cons and see if it works out well for you, I’ll be sticking with fastxt if, and only if, I can convince my friends to join too.

Fastxt is not only a well behaved application, but the fastxt team themselves are helpful and provide good customer support. Using the app itself is cheap (considering what you’re getting – now think about how much it would cost on a GSM dial up!), and the benefit of having MSN Messenger as well as fastxt messaging is clear.

But the SMS still has problems, it does add around Ł10 a month to our phone bill with the fastxt subscription and GPRS costs, and where’s support for ICQ and AOL Instant Messenger?

74% - I look forward to seeing how fastxt evolves and polishes the service, especially if any competition pops up in the next few months.