You don't get anything for a pair, not in this game! Will Croker win a cuddly toy, or has it lost its Brucie Bonus? It could still be a lucky night if you play your cards right... 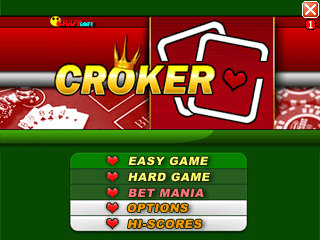 The basic idea of Croker is to match up randomly-dealt playing cards into two pairs, three of a kind, a full house (three of a kind and a pair), or four of a kind. The higher the value of the cards in the combination, the more points you score with it. As you make matches your life force increases, as you deal new cards without matches your life force decreases. When it runs out, the game is over.

To help you with your task, you can hold certain cards before asking for another random deal, much like a fruit machine. Unfortunately the instructions telling you to click on the "change" button are wrong, you actually have to press down on the d-pad while highlighting the "change" button.

For some strange reason, perhaps just to be different, CrazySoft have used traditional playing card symbols on the title screen but the cards in the game have baffling illustrations such as bowls of fruit, light bulbs, bombs, apple cores, alarm clocks, piggy banks, dice, sunflowers, thimbles (I'm not making these up!) and frogs. There are no suits as such, the pictures just match a particular number. In practice, you're just matching up groups of numbers from one to ten. 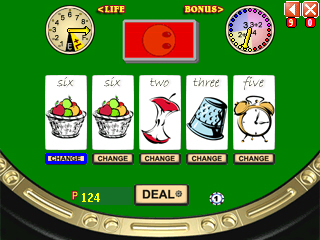 To complicate matters there's also a bonus meter which points in four different directions, and you're supposed to earn particular kinds of groups (for example three of a kind) many times in a row in order to build up the bonus meter. This isn't very easy because the groups can appear totally at random without you having any say in the matter, depending on which cards you're dealt.

If you build up your life meter enough, you level up and get a score multiplier.

Playing Croker consists mainly of dealing the cards, holding a pair if you happen to get one, changing the rest of the cards, holding the pair again if the change didn't help, changing the other cards again etc etc. Eventually you get some kind of winning combination and you start scoring, or you run out of life, but nowhere does it feel like there's any strategy involved, and sometimes you level up just by dealing the cards repeatedly without holding any.

There's a hard mode where the life meter counts down even when you do nothing, which is meant to make you play more frantically but in effect simply makes the game frustrating as you have to spend most of your time holding and re-holding the only pair you have. Frequently the game ends in the middle of you selecting cards rather than actually doing anything exciting. You can slow the hard game down, but then you end up with the dullness of the easy game. The method for selecting which cards to change ought to be streamlined, it should automatically hold the current pair if you held them last time. 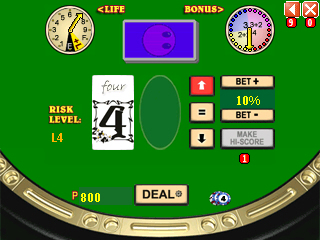 But... there's a charming little extra game in Croker called Bet Mania. This is, in effect, a smartphone version of the popular UK game show Play Your Cards Right (the US version was known as Card Sharks). Anyone familiar with British popular culture can't help but hear Bruce Forsyth and the audience screaming "Higher!" and "Lower!" as you have to guess whether the next card will be a greater or smaller number than the current one, or the same.

The game thoughtfully gives you a risk assessment for each option, and you can choose what percentage of your score you'll bet on the next card, from 10% to 100%.

As with the main game, losing a bet drains your life force, winning a bet gains you life force, and the game is over when it's all gone.

Croker is nicely presented with reasonably clear graphics and nice colourful cards, with a pleasing Las Vegas theme throughout. The choice of card illustrations is very strange indeed though, and it doesn't really fit in with the glamour depicted in the rest of the game.

Croker's main game is dull in easy mode and annoying in hard mode, there's just not much enjoyment to be had from them. In theory Poker should be fun but Croker's interpretation really needs more playtesting, especially in hard mode where there's too little time to do anything before you get zapped.

The Bet Mania section is fun in a nostalgic kind of way if you remember Brucie's charming catchphrases, but beyond that novelty there's not much appeal in a very simple game of odds. The TV series Play Your Cards Right managed to create excitement by only having a limited number of cards that the player had to guess before they won the star prize, so the last card turn was filled with tension. Bet Mania has no end point or goal, so there's no real tension.

CrazySoft really does deserve applause for trying to breathe new life into the much-cloned genre of card games on smartphones, but they also need to do far more playtesting before unleashing games like Croker on the public. The point of games is to entertain you, even when you're just killing time with them. Croker feels too random to be fun, the player just watches stuff happen instead of actually taking part in any intelligent way.

PS: You can see a gameplay video of Croker over on the Unofficial Nokia Gaming Blog.

The game reviewed here was the Symbian S60 3rd Edition version of Croker. It was reviewed on a Nokia N93. The screenshots are taken from horizontal mode, but the game can also be played in vertical mode.

Croker for S60 3rd Edition can be purchased by clicking here.

There is also a UIQ3 version of Croker.