One of the 'missing' bits of software for S60 3rd Edition is Card Deck, Nokia’s solitaire/patience card game (available on earlier handsets)  and I’ve been on the look-out for a good replacement for some time. Astraware’s Solitaire goes a long way to filling that gap, but it’s not the ultimate answer.

One thing that works against this collection of solitaire games (on S60 devices at least) is that there is a lot of ‘common code’ in the application itself. This makes it easy for the programmers to re-build this application to run on multiple platforms, UI’s and operating systems – and that includes the UIQ3 version Astraware released at the same time. But it does mean some compromises have been taken in the interface. It doesn’t follow the S60 style guide for presentation, which means that the first few times you play the game it can feel rather overwhelming, with menus popping up all over the place, small fonts on display, and a lot of options to tweak. 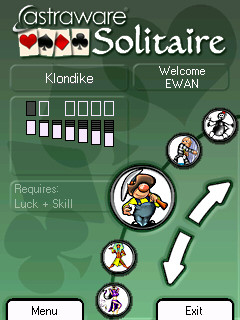 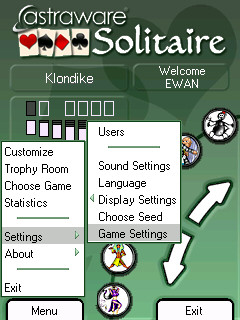 Stick with it, though, because Astraware’s Solitaire is a fine collection of some of the better known solo card games. The expected games are here, including Pyramid (remove pairs of cards that add up to 13) and Klondike (the seven rows of cards that go red and black as you build up aces – you know the one you all think of first when I say "Solitaire"). Joining this lineup are Sultan’s Harem, Yukon. Four Seasons, Demon Canfield, Idiot’s Delight and Golf (better know as HomeRun to the old, long in the tooth Psion users… Hi Steve!) Calculation and Spider.

The last two games are worth highlighting – the first is a version of FreeCell, which has hardly been out of Solitaire collections since it was used as a Win32 demo by Microsoft and subsequently bundled everywhere. This is one of the better ports onto a smartphone of the game, and I suspect many people will be happy to purchase Solitaire just because FreeCell works well. 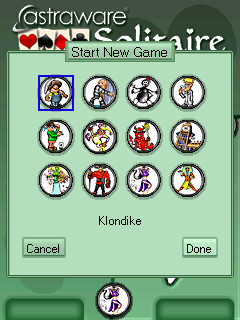 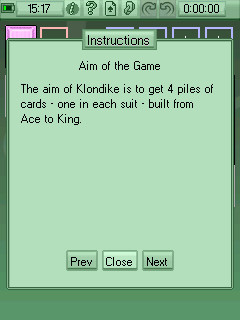 And, inexplicably, Clock Patience is there as well. You remember this as a kid? You deal out 12 piles of cards and try over the first one, which tells you the next one to turn over, and so on till you win (they are all turned over) or you lose (the kings get in the way, which is very likely). Yes the most random, no-strategy-required patience game is here as well. There may be a slim (very slim) argument that this is ‘for the kids’ but it is so out of kilter with the rest of the games in the package that you’d need Miss Marple to work out why it’s here.

Of all the platforms that Solitaire runs on, S60 is the only one that does not have a touch screen – you’re left with a moving cursor to elect the cards you want to play. To help you, there is an 'auto-complete a move' mode which shifts a card to the space available when you do the first click. If you’ve got two options to make, there are times (especially in Klondike) when you’ll need to switch auto-complete off to make sure the cards go where you want them to go. This can get a touch frustrating. 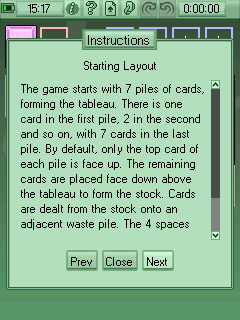 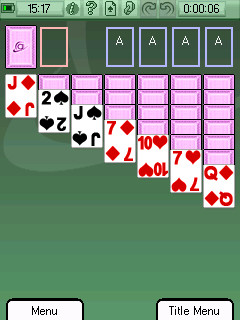 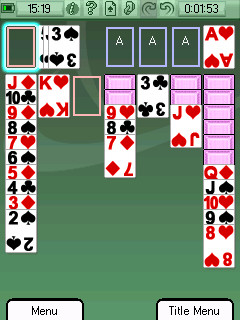 At least settings can be set on a per-game basis. Auto-complete in Canfield, for example, is almost a given, because it’s such a difficult game, but it can get frustrating in Pyramid when there could be two 8’s and two 5’ available to add up to 13, and you need to get the right combination of the four available. 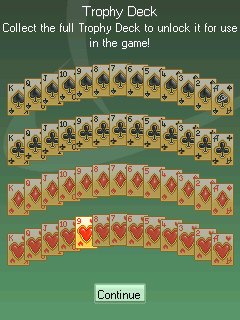 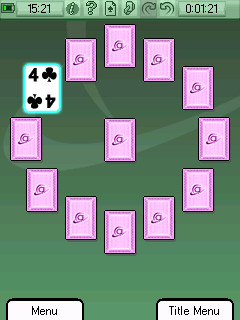 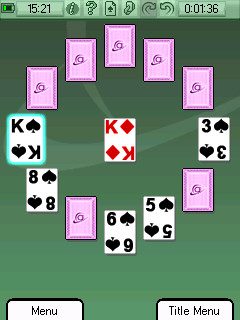 If the regular games aren’t enough for you, Astraware have added a ‘trophy deck’. With 52 separate challenges in the game (longest winning streak, luckiest game, and so on) all awarded at the end of each successful game if you meet the conditions, you slowly build up the deck by winning 52 trophy cards. It’s a nice touch to keep you coming back for more, but you still need to be someone who wants to play the game for this to be attractive.

It is a time limited in the demo – you get to have twenty games (in any combination) before you’re asked to purchase the title. It’s a short demo period, but it is enough to decide if you like it or not. Personally I’d rather see something a bit longer; this is probably right at the edge of acceptable demos. But in the mobile gaming world, there’s a small sweet spot where the most sales are made from the demo – given Astraware’s experience I suspect that they've gotten this right here.

Solitaire is not perfect, and it’s not in the 'absolute must buy straight away' category. But it is a lot more than competent, and playing it for extended periods provides the familiarity that you always get with games like this. While my hunt for the perfect solitaire game continues, Astraware have nicely sated my immediate need for a hit of ace, two, three and four.

Ewan Spence, All About Symbian, June 2008