The search has been on for several years for a replacement for the (now no longer produced) Proporta Pocket Power, an all in one, no cables needed, truly credit card sized emergency charger - and, right up at the premium end of the market we now have a candidate, offering full 2A output and able to deliver around 700mAh at 5V in about 20 minutes. While only around a one third charge for today's smartphones, that this fits unobtrusively in your wallet in a card slot makes this a terrific (if slightly pricey) accessory to get you to the end of a long day. Coming in deluxe packaging, with extras, it's also just about the perfect gift for a smartphone owner, as I explore below.

The situation so far...

Up until now the nearest thing to solving at least some of these issues was the aforementioned Proporta Pocket Power, tiny, thin and with a flying lead that folds out to plug into a microUSB compatible phone. You then charged up the Pocket Power later on by plugging in a standard microUSB cable. The only flies in the ointment being that the capacity was quite low (quoted at '680mAh', meaning around 480mAh at 5V, delivered) and that, more critically, Proporta stopped selling them. And I've never found a direct equivalent from any other source.

Almost exactly the same physical size as the Pocket Power, the LithiumCard, from LinearFlux, was unveiled back in February and I now have a couple of samples, one for microUSB and one for Apple/Lightning compatibility (shown immediately below, though the microUSB one is shown thereafter). Each is available in silver or gold aluminium, another hint that we're aiming at a premium product here. 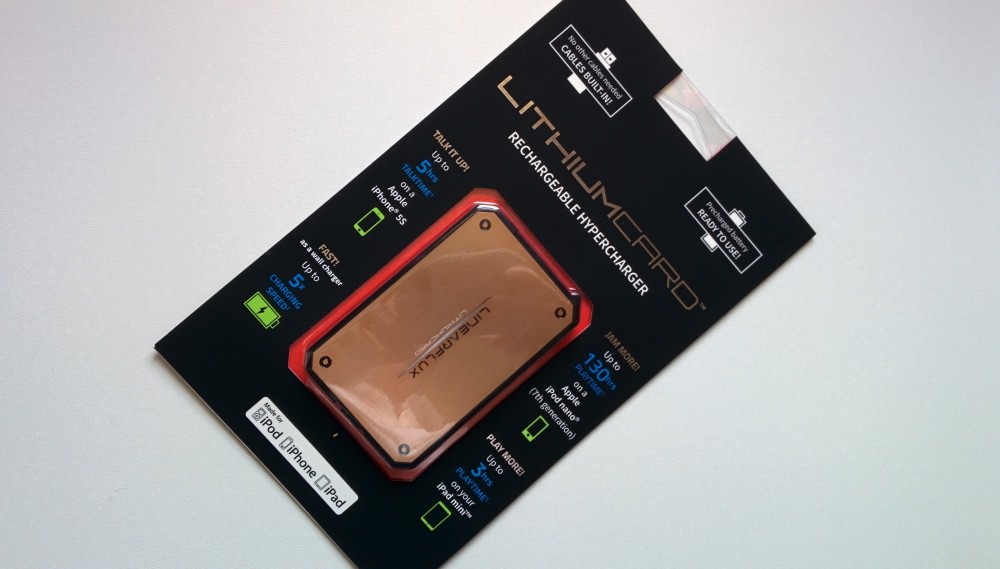 Happily, there's some serious technology behind the brand too - in fact, far from being just an over-priced cheap battery from some Asian source, there's enough here to break out the benefits in a bulleted list, in approximate order of importance:

The LithiumCard is beautifully made, with etched aluminium top and bottom surfaces, and a toughened plastic rim to absorb any knocks.

Now, 700mAh delivered may not seem like much, but on a typical test Nokia 808 PureView, at 33%, it was taken to 88%. Next, my test Lumia 1020, was down to 10% at 4pm, but the LithiumCard got it back to just under 50% in around half an hour, both limited in charging speed by the older phone hardware, not by the card. But in both cases, enough to head out for the evening and still have a functioning camera/smartphone. So file this, as with the Pocket Power, as an 'emergency charger', certainly.

The diminutive size and lack of separate cables are the key, really, meaning that you can put it (charged) in your wallet and, quite literally, forget about it for weeks, even months on end. Then, when needed, it's always on you, since your wallet's always on you.

The question of value for money is appropriate, of course. This is undoubtedly an expensive accessory, at £30 in the UK, but it's well within 'gift' territory - maybe give it yourself after a particularly good month at work, or with birthday money? That is, if someone hasn't given one to you in the meantime!

PS. Thanks to MobileFun for the review samples, here's their full LithiumCard wallet charger range.

PPS. If you need more information than supplied above or from MobileFun, then note that there's a glossy official site for the accessory too.