Somewhat eyeing up the OIS in the cameras of many of the Nokia Lumia smartphones, guest writer Keir Brython got to wondering how he could stabilise photos for extreme low light shots on his Symbian-running Nokia N8 and 808 PureView. His ponderings led him to the two titled Joby tripod mounts and his full illustrated review is below.

There have been some very impressive developments lately with OiS (optical image stabalisation) on Nokia's newest Lumias. First we had the 920 whose OiS enabled long exposure times for impressively sharp photos in low light (at least with static subjects) and now we have the 1020 which achieves similarly impressive results with its much larger sensor.

What if you have an older Nokia model though, one without OIS? Both the N8 and the 808 have fantastic camera modules which far exceed the performance of the 920 and in the 808's case, arguably that of the 1020.

To get great results with a long exposure time you have traditionally required a tripod to keep things sharp and steady. Who wants to lug one of those around though? I mean there's no point in using a mobile phone camera with all of its convenience if you need to drag along a tripod. You may as well get a DSLR to go along with your bulky tripod and do away with any pretence of mobility. If only tripods were as portable as your phone.

When I went looking for a tripod adaptor to suit my Nokia 808 PureView I was turned off the Nokia HH-23 by less than glowing reports of its performance. Instead, I turned to Joby which makes very high quality tripods and adaptors for both mobile phones and conventional cameras. I ended up ordering the Joby GripTight Micro Stand and also the Joby GripTight GorillaPod Stand. They were relatively inexpensive and I could not be more pleased with the quality and the results I've been able to achieve putting them to use. Let me show you!

First up is the GripTight Micro Stand. How portable would you like your tripod? How about small enough to put on a keyring? I'm not kidding! 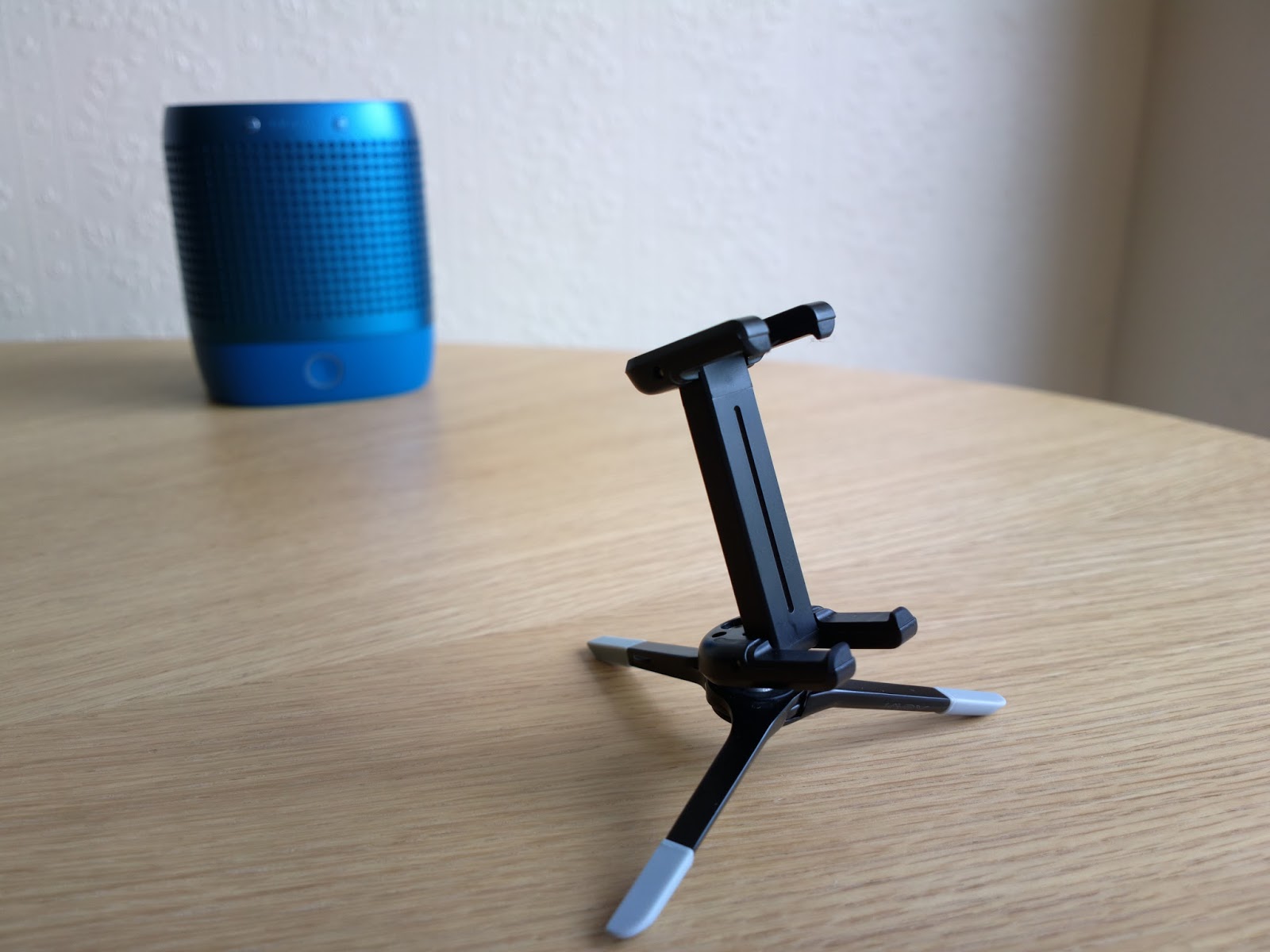 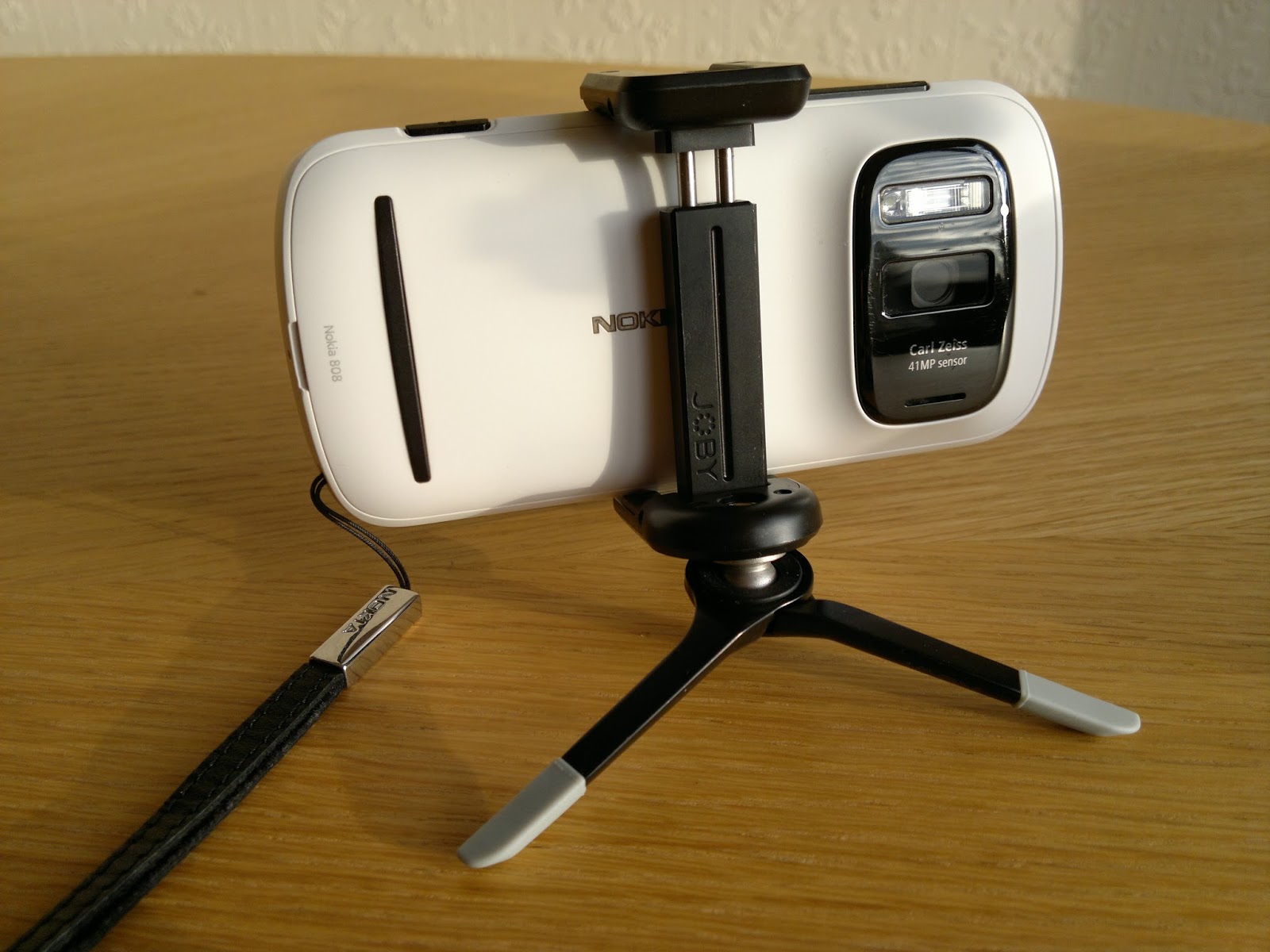 And here it is holding the Nokia 808 in position

As soon as you place a Nokia 808 or N8 in the stand, it becomes obvious that it's not only useful as a tripod for taking photos, it's also brilliant for using as a music station, watching video and as a bedside alarm clock when the always on, Nokia Sleeping Screen application is in use: 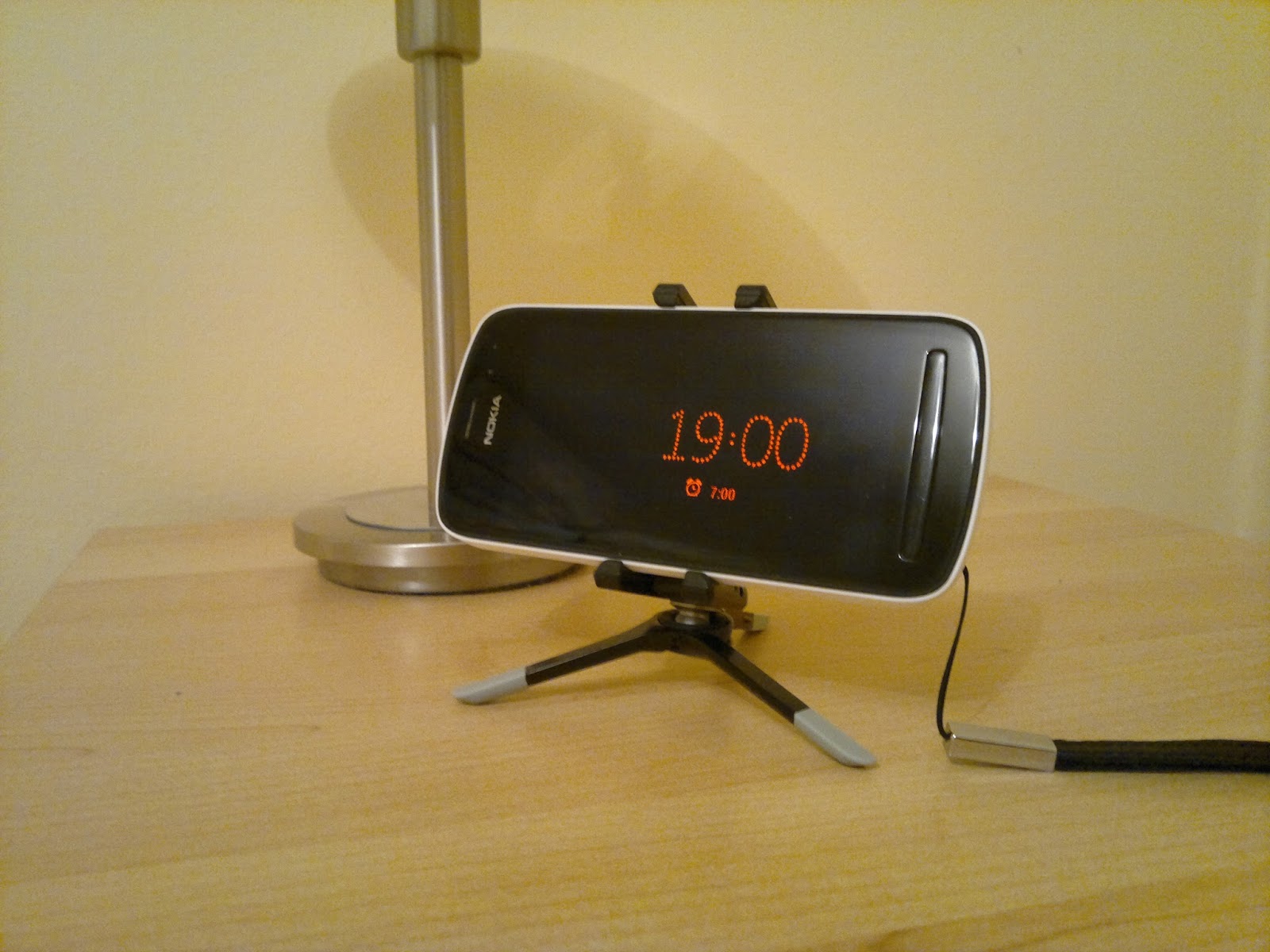 The real party piece for this stand though is its ability to fold up into a package that's impossibly small: 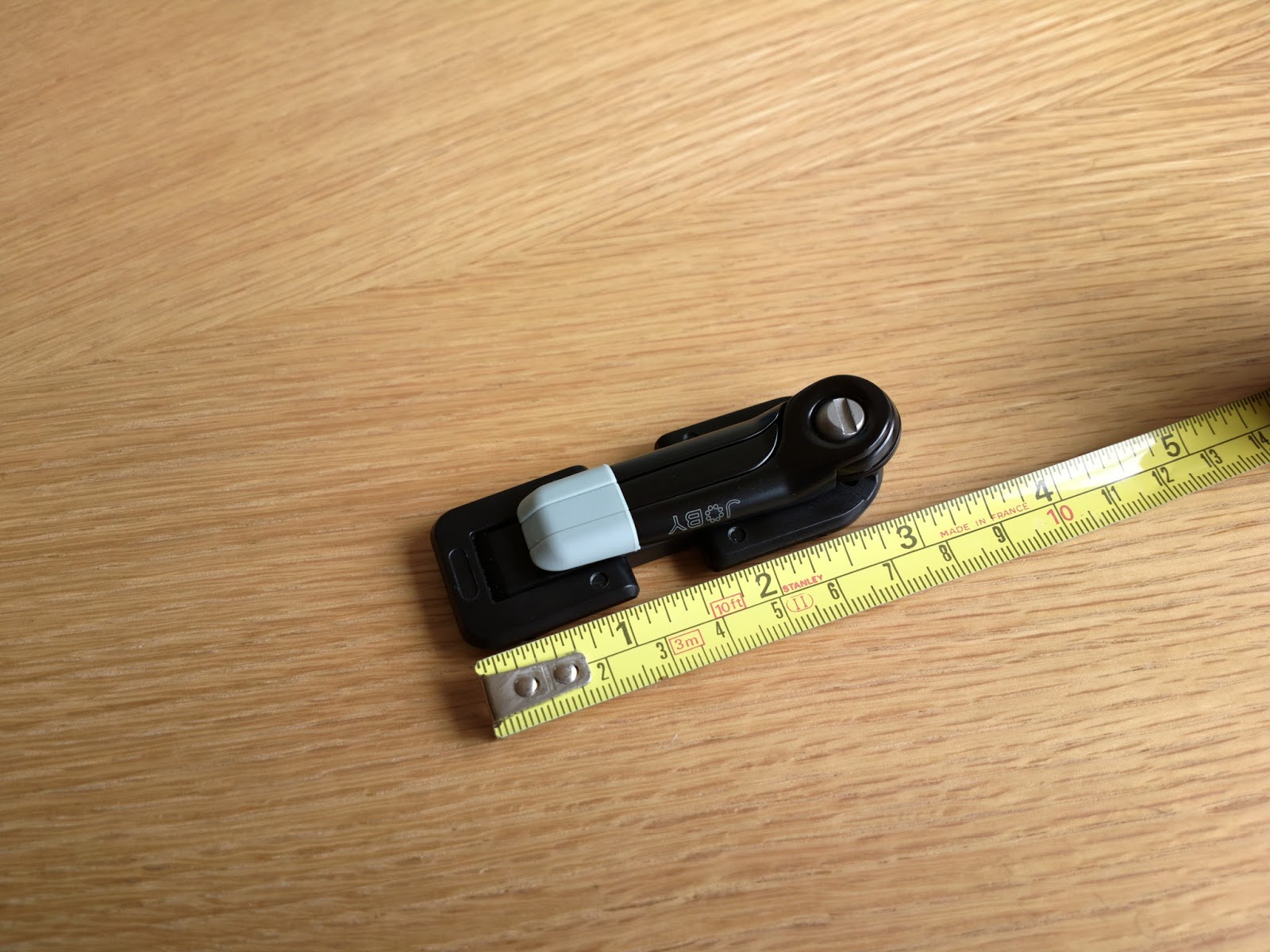 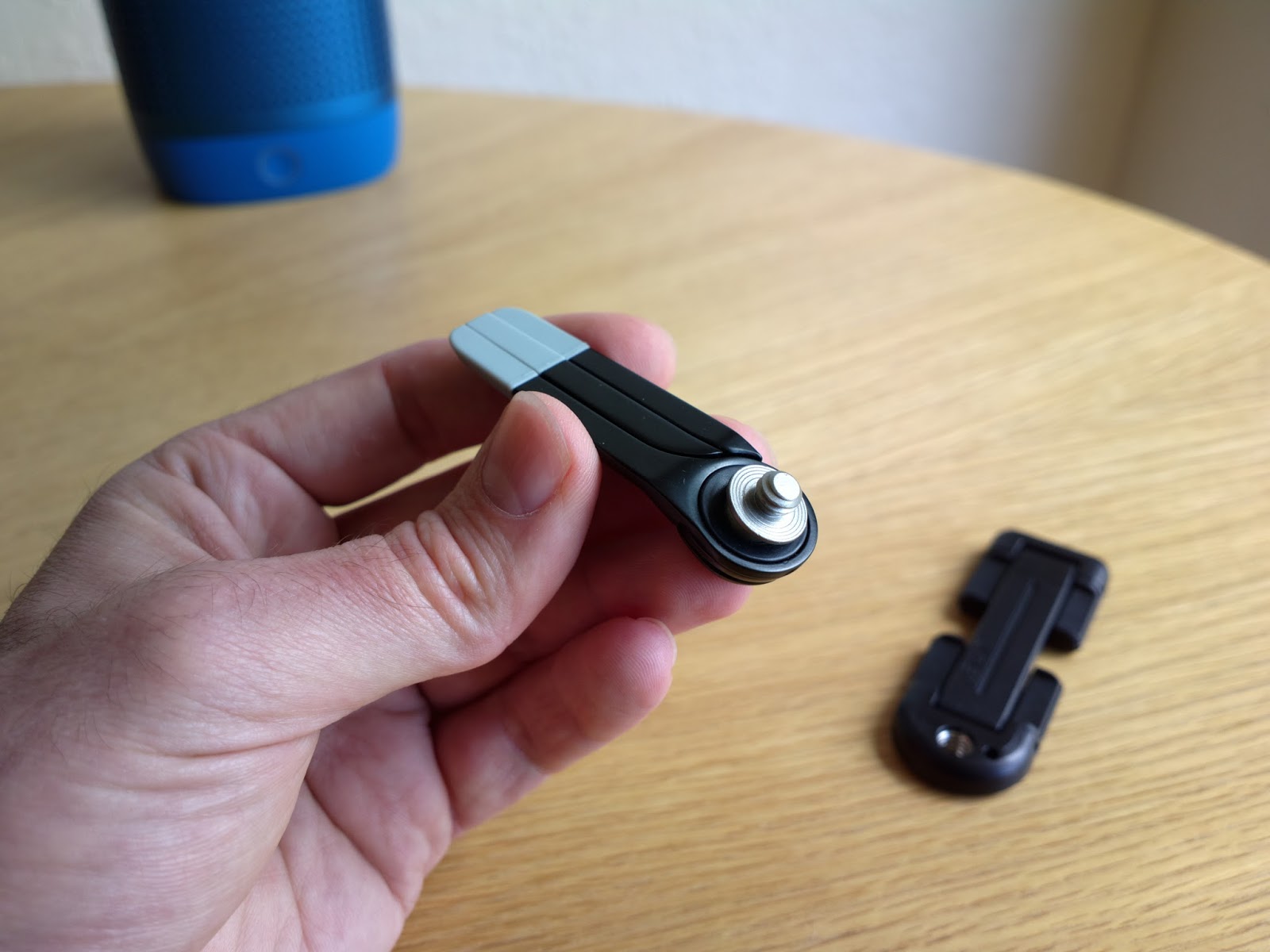 The base and the clamp sections come apart (using a coin to tighten or loosen) which means that you can use the tripod with any other small devices that already have a standard tripod thread (and it's small enough that you could leave it connected and still fit it in your camera's regular case). Conversely, you can use the separate clamp section to adapt your mobile phone to much larger, conventional tripods. 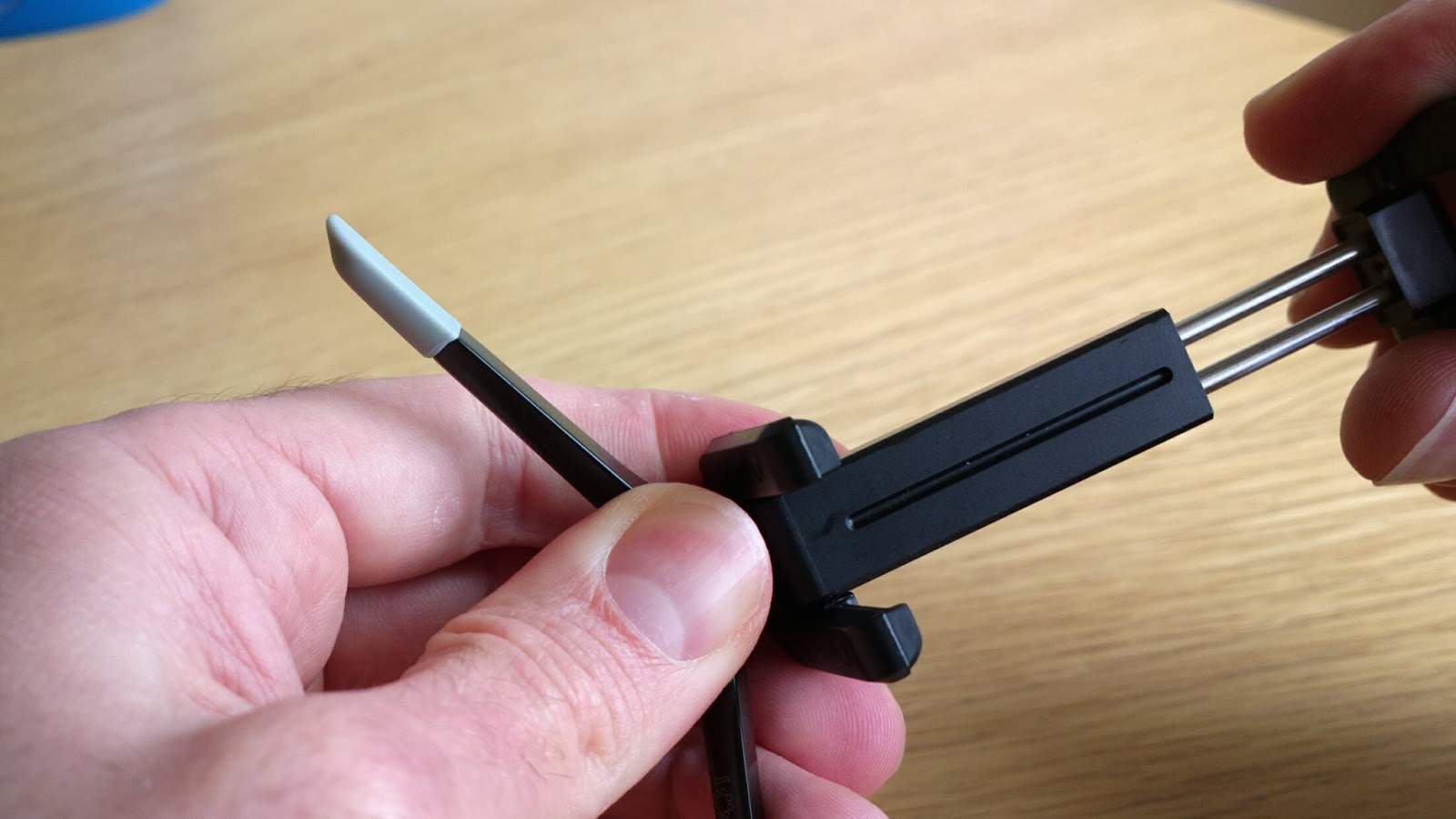 The clamp section has very strong, precision made, spring loaded metal parts which live up to the GripTight name and open up a long way to accommodate today's large screened phones. There are grippy rubberised pads too, which will hold on firmly to your phone without damaging it. 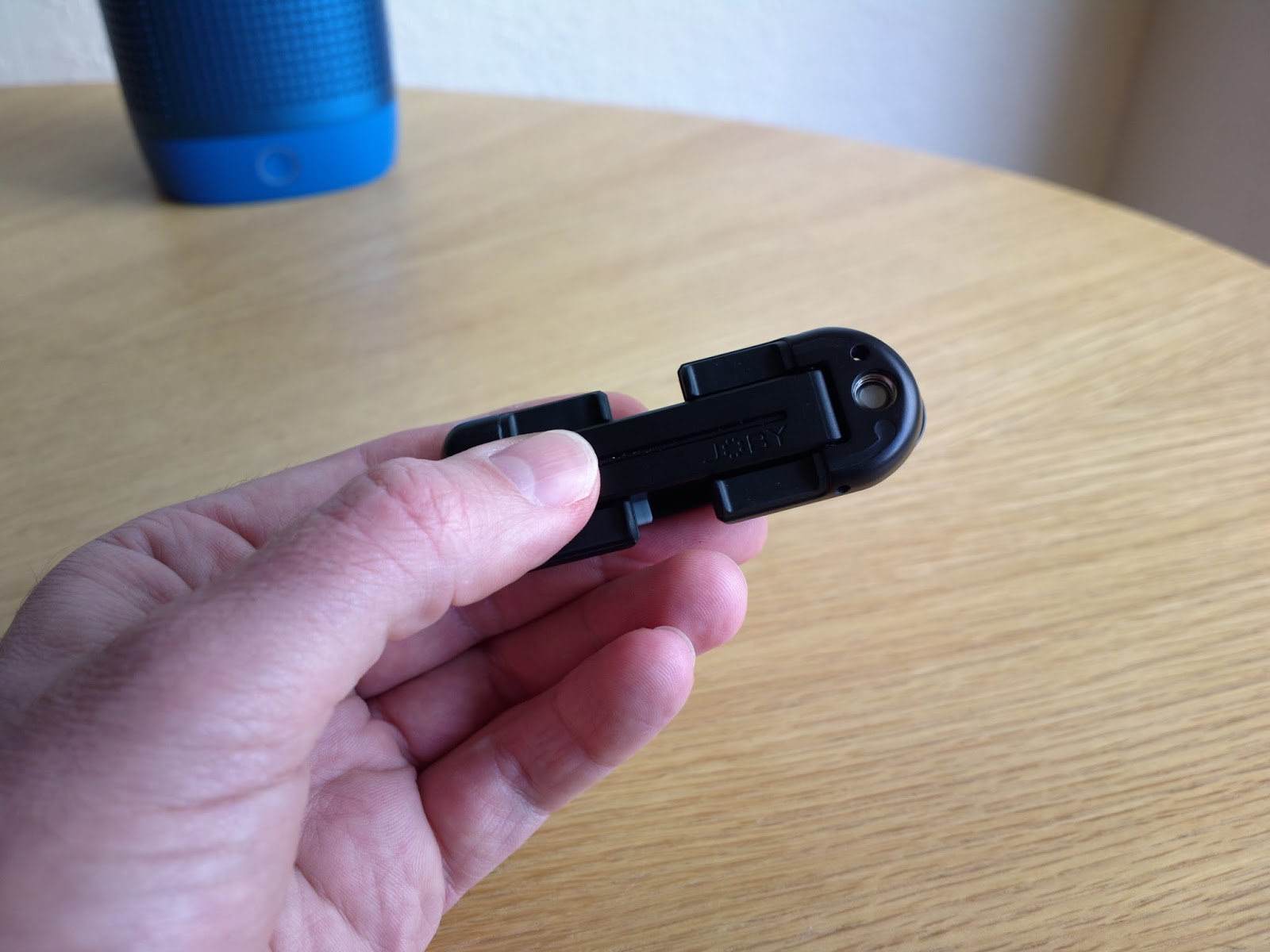 If you look carefully above the thread hole in the photo you will see a smaller hole to facilitate connection to a keyring. As promised!

Up next is the Joby GripTight GorillaPod Stand. This is a larger but still incredibly light and portable tripod. It has legs constructed of a series of rubberised balls. These provide a grippy and flexible platform that suits irregular surfaces and will even hang on laterally to things like tree branches. It uses the same foldable clamp section as the GripTight Micro Stand and also incorporates a quick release mechanism to separate the legs from the clamp section. 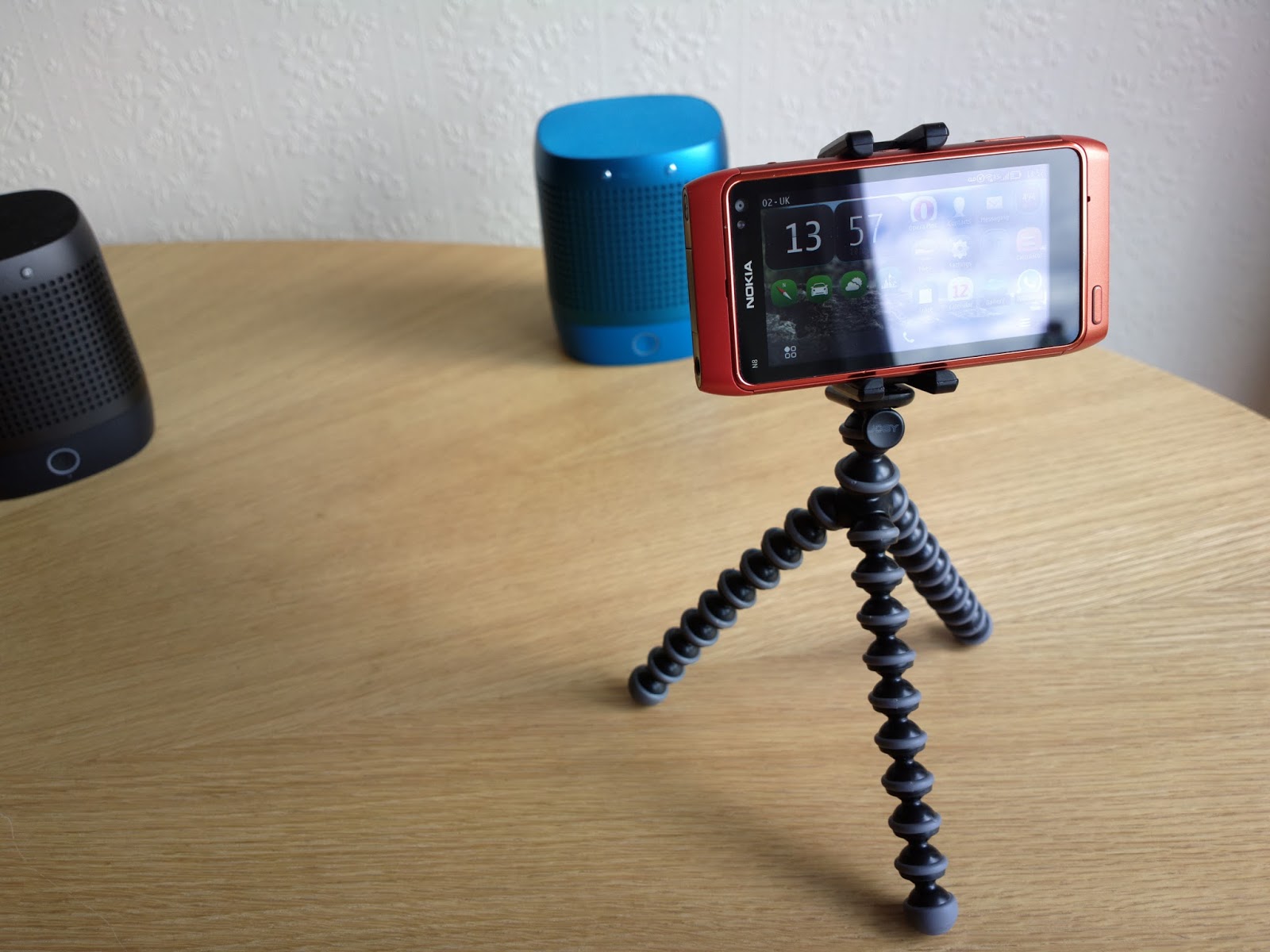 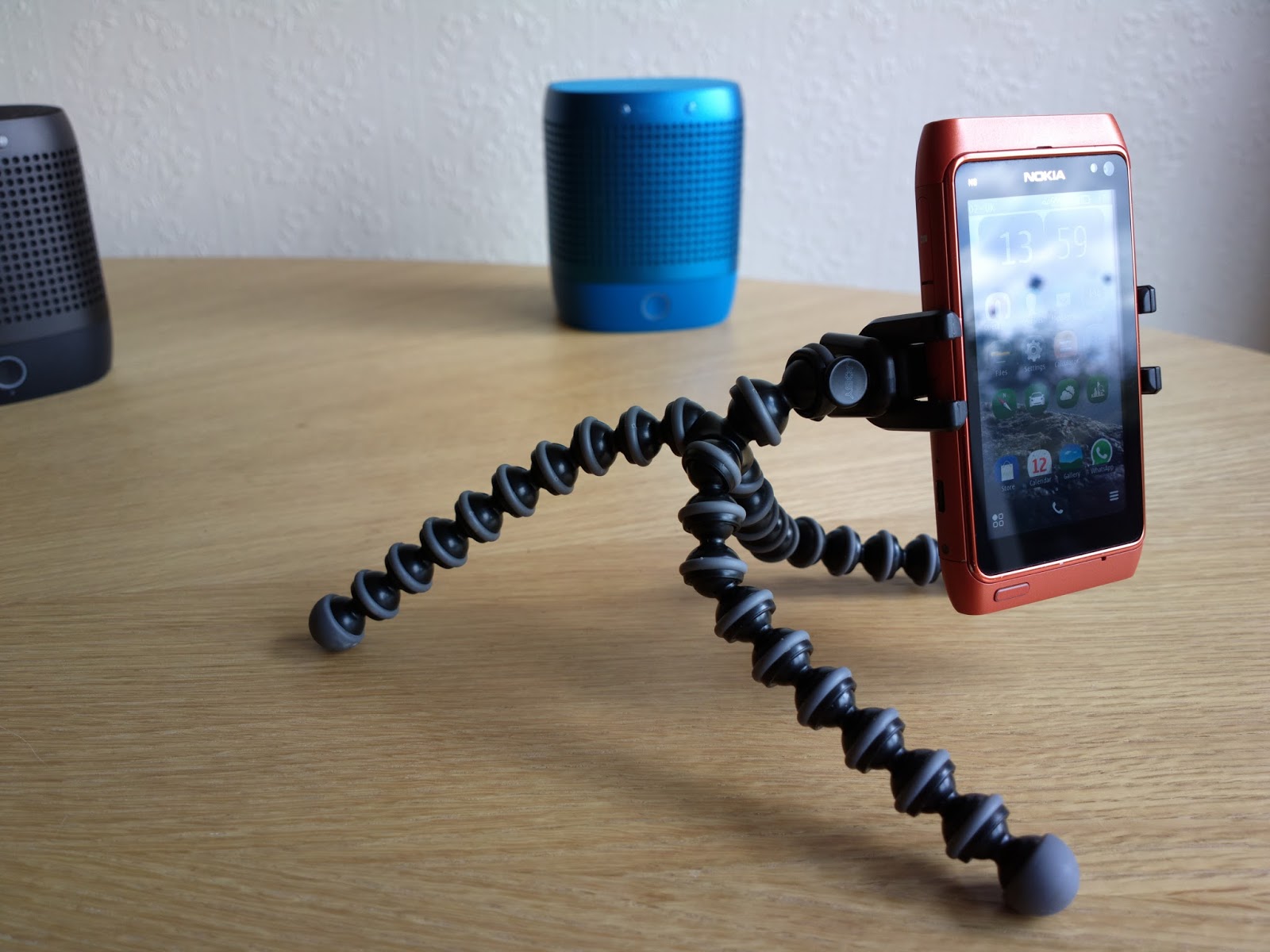 The legs can bend into an almost unlimited number of positions.

So, what can you do with these great little tripods? Well I've been having a lot of fun. I've mainly been using the GorillaPod because it's the most flexible. I was down by the Thames having a workout one evening (in Gravesend, there's a modest outdoors gym) and I caught the sunset. I had the Joby GripTight GorillaPod Stand in my gym bag and was able to capture this image:

This photo was made possible in such low light because the tripod held the phone steady during the longer exposure. Another trick I use is to deploy the self timer. It means that I don't have to interact with the phone and introduce any movement or shake by pressing the button. The standard Nokia 808 offers 2,10 and 30 second timer intervals. The 2 second interval is useful for a lot of tripod mounted scenarios. Check out the high resolution version of this Thames image (link above) and notice how free of digital noise it is.

And employing the tripod when recording video results in a whole new level of production quality too. I used the GripTight Micro Stand to record a simple video of a burning candle which is absolutely stunning. There's no noise in this video even in the dark areas. You'll need to watch it at 1080p to fully appreciate it: 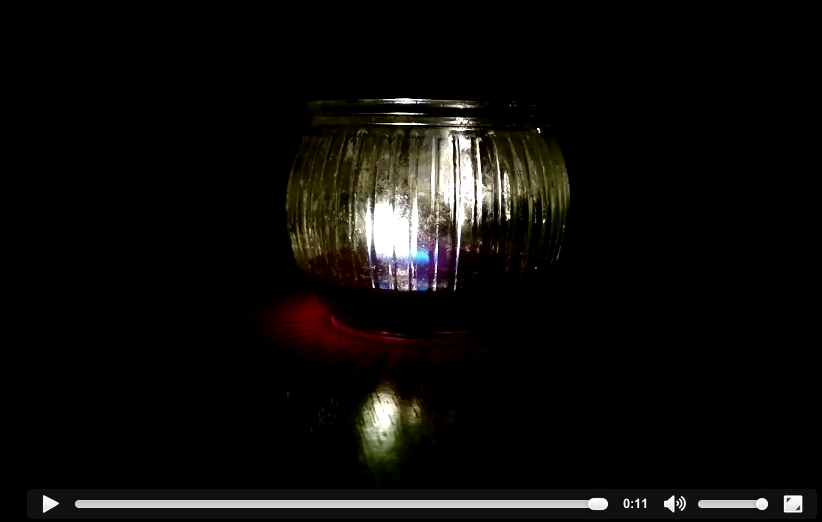 Link to video on SkyDrive

In summary, I'm really impressed with the Joby gear. It's well made, inexpensive and very portable. It will enable you to take some amazing photos that otherwise would be next to impossible to achieve. I've only just scratched the surface too - I'm looking forward to shooting a super long exposure night scene with moving illuminated elements and also doing some more video using the Joby grip adaptor and my full height tripod. Best of all, the Joby gear is so small that while it might not always be in my pocket, there's no reason why it can't live in any small bag that I'm carrying. It's that portability which ensures I'll get great use out of the Joby gear.

Thanks, Keir! The Joby GripTight Micro Stand and the Joby GripTight GorillaPod Stand do seem quite widely available across the world, though you might like to seek out a local retailer/distributor.