It's all very well having 'Voice recorder' built into every Symbian smartphone, but there's not exactly a lot of choice in terms of settings (quality can be 'MMS', 'standard' or 'high') and there's a one hour limit hard coded in. What if you want to record in higher quality? Or for longer? Or using a different codec or sample rate? That's where Audio Recorder Pro comes in, offering all of the above. Here's my assessment, complete with audio samples to check out.

The mission here, according to the developer, camera-specialist Harald Meyer, was that he'd been asked by several users for a way to harness the audio capture side of the Nokia 808, and everything developed from there.

Voice recorder works well enough for general use, but it's not quite good enough when capturing original music, should you want to do something with the audio later on. Lossless capture was essential, as was being able to record more than an hour in one go, plus 96kHz sampling was a 'nice to have'. And, in Audio Recorder Pro, these aims have been achieved. Coupled with the superlative HAAC MEMS ("Rich Recording") microphones in the Nokia 808*, you can use the smartphone as an audio capture device in a studio or theatre environment without it embarrassing itself.

* Note that the utility works fine with the standard MEMS digital mikes on the rest of the recent Symbian smartphones (from the N8 onwards), though obviously there will be some compromises in terms of stereo/mono and dynamics.

To give you an idea of quality, here's an 808-captured piece of guitar music, stereo, 96kHz, uncompressed wav (PCM, ~10MB) (there are more [voice] samples of my own below). Fairly stunning, and remember this is lossless, i.e. no compression has been applied, so this is ready for direct import into a digital studio system.

Here's Audio Recorder Pro in action - the app is essentially one big scrolling dialog (implemented in Qt), with a big 'ol Start button at the top: 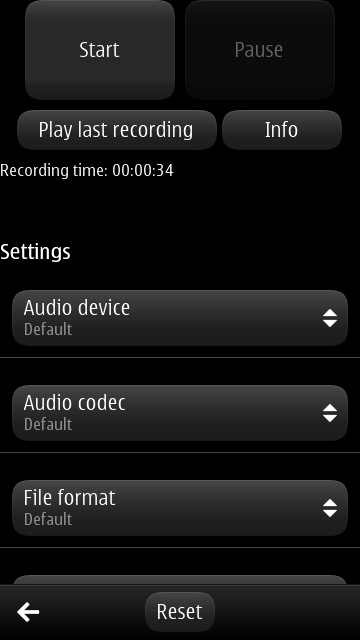 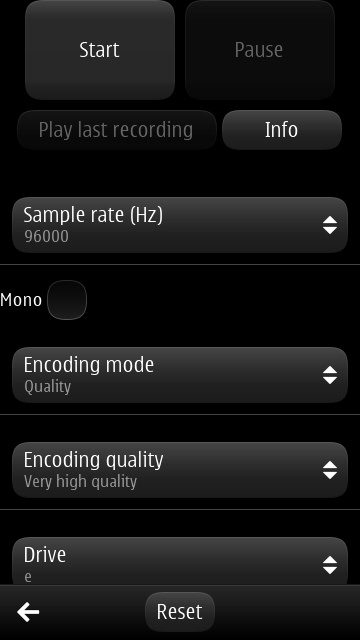 The main interface, note that the pane scrolls down, as shown here, revealing a wealth of options. Note that not all options chosen actually work together, so you have to know a little of what you're doing and what you want to achieve. 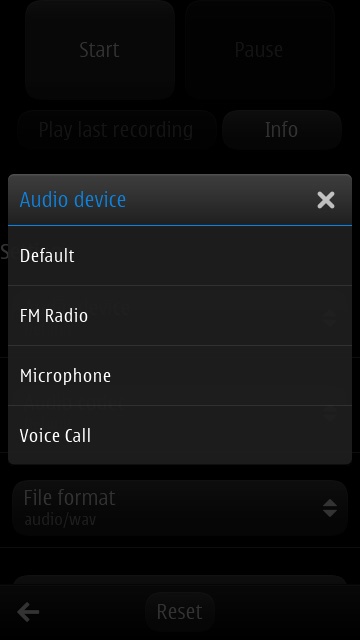 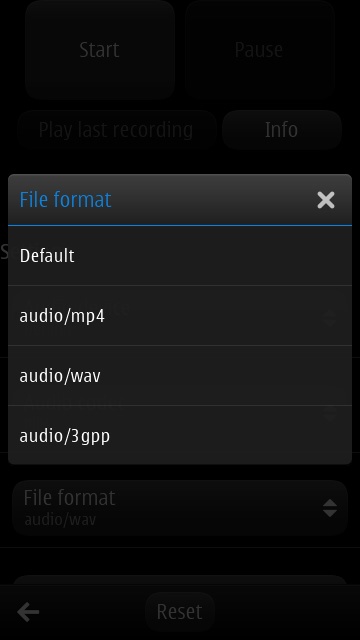 Recording voice calls and FM radio are two party tricks here (as opposed to the main event), but might be useful to some (though note that the FM radio support is only for Belle FP1/FP2 devices, i.e. not Belle Refresh)... 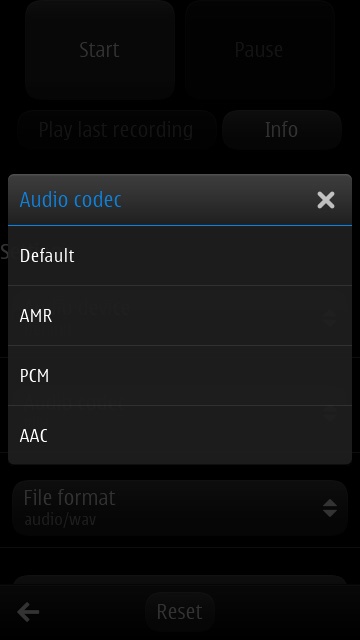 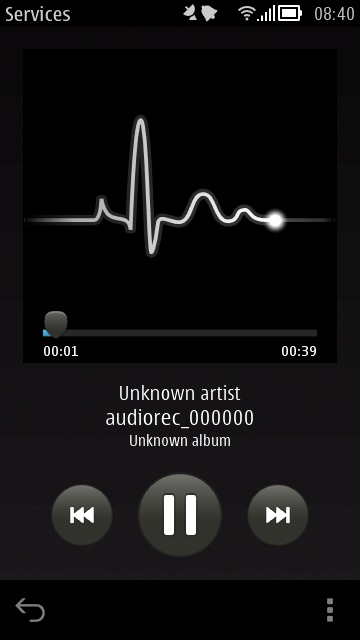 The all important choice of codec - AMR is typically low grade (think MMS), AAC is a great all-purpose codec already used by the likes of Voice recorder, and PCM is for lossless audio (think audio CDs and studio sound); (right) you can play back the last recorded sample within Audio Recorder Pro - or simply find it later in \Sounds on your chosen capture disk... 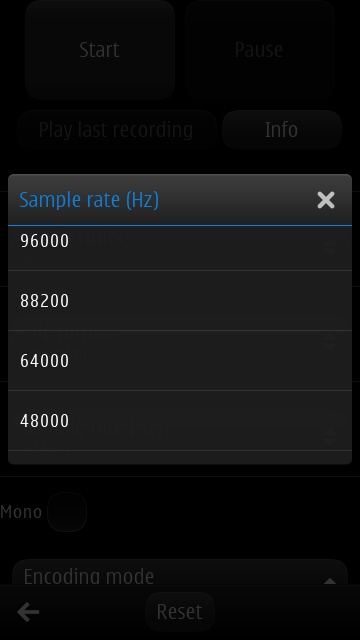 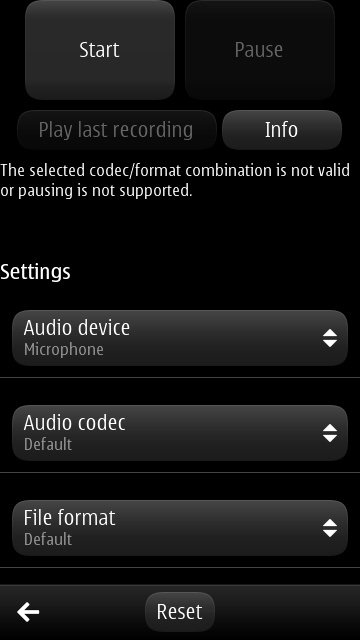 The sample rate reflects how fast the hardware samples the ambient sound - the faster the better, since higher frequencies and faster dynamics can be more accurately captured; (right) the app is not without a quirk or two, here telling me that the 'default/default' selections aren't 'supported' - restarting the app fixed the issue

In terms of limitations, with a standard FAT-formatted mass memory or microSD, the limit of audio capture is 4GB, which works out to over three hours even with lossless PCM capture, which should be enough for anybody. With exFAT-formatting (supported by Nokia 808 for microSD) the developer notes that recording time is effectively "infinite". Though of course you've got to consider what you're going to do with the files later on and need to make sure that your processing software back on the desktop can handle such monster individual files.

It's worth noting that, although the dialogs offer all the codecs, sampling frequencies, file formats, and so on, most of the options produce results that are no better than the standard, free, built-in Voice recorder (with its quality set to 'High'). All these options are here for completeness - the entire application is really centred around the one use case - lossless capture at a very high sampling rate for up to several hours.

Here are a few brief audio samples (two from the app, one from Voice recorder) - note that unless you have exceptional headphones or speakers, you're unlikely to hear any real quality difference - underscoring the 'pro' part of the application name here.

Audio Recorder Pro did have a few quirks and niggles (some mentioned above), but on the whole performed as advertised. I can imagine it being left recording a practice session for a band or orchestra, or even for capturing proper concerts, all of which typically might run to two or three hours.

For casual use, you'd use the space-saving MP4 option (around 60MB per hour), for later re-use, you'd use the full lossless PCM (at over 1GB per hour). Later on, for the latter, you'd just have to import the lossless audio into the studio/editing software of your choice and then chop up/re-master/burn from there.

We've already speculated on Nokia 808s being 'banned' from gigs for video capture (where other phones would be let in). Recording audio is a lot less conspicuous and offers, with this tool, even higher quality. In addition to the rehearsal/lecture possibilities, this is perhaps the new essential phone and software for gig bootleggers?

PS. In addition to the Nokia Store, you can buy Audio Recorder Pro directly from the developer too.

PPS. No live gigs around me presented themselves for a real world high volume test, so comments welcome if you've also been using this tool - what did you do with it and can we hear some of the sample quality?