Regardless of my own feelings on these social utilities mangling and downsampling your photos, I realised that Sophie Cam (which at least preserves a modicum of resolution for locally saved images) had never even been mentioned before on AAS. Updated in the last month to v1.6.1, there are now more filters, a new tilt shift effect and more, which means that it's time for my full review of this rather slick social photo tool.

The idea, as usual, with Sophie Cam is to take photos (or use ones from your Gallery) and then mangle them in interesting ways for dramatic effect, before sharing them with your friends on Facebook, Twitter and Flickr. The genius of Instagram (and why it got bought for so much money) was that it included its own social network that took off in its own right - Sophie Cam works in much the same way in terms of photos, but is reduced to sharing via your existing social connections. Which makes it a useful tool but unlikely to achieve the mindshare that Instagram ended up with. 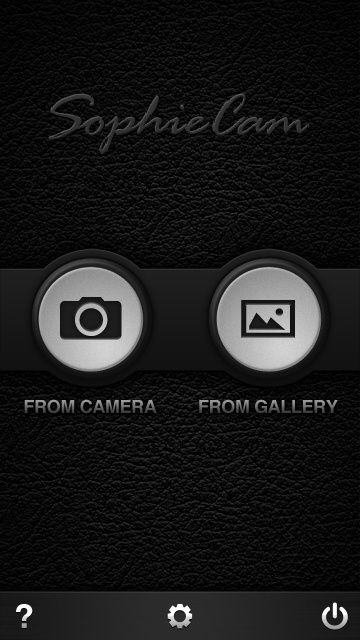 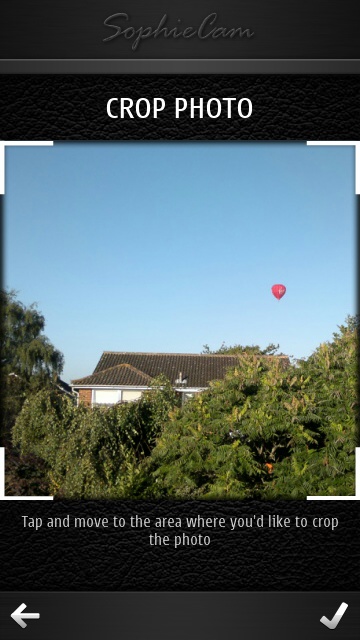 It's good to see the flexibility to either snap using Sophie Cam or to use an existing photo that you took earlier. After all, you'll often take an interesting photo with the main Camera application and then only later think of sharing it with an effect. In this case, I spotted the Virgin hot air balloon over my town and grabbed it with the E7's camera. Loading this into Sophie Cam, you're forced to crop it to a square aspect ratio. This seems to be the convention for 'fun' photos and, yet again, it baffles me. Yet another way a good photo is utterly compromised...

The cropping is trivial to achieve and then you're on to the 'fun' stuff, the filters ('Antique' applied below) and 'Tilt shift' (applied below right): 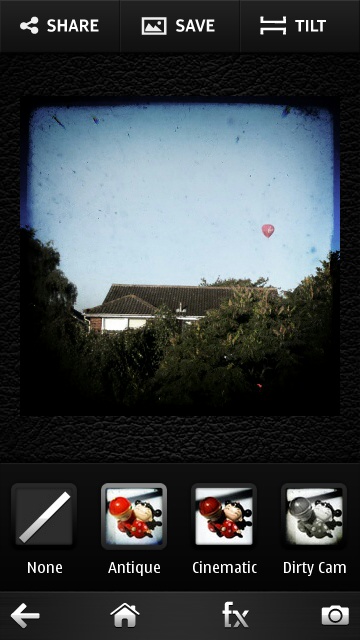 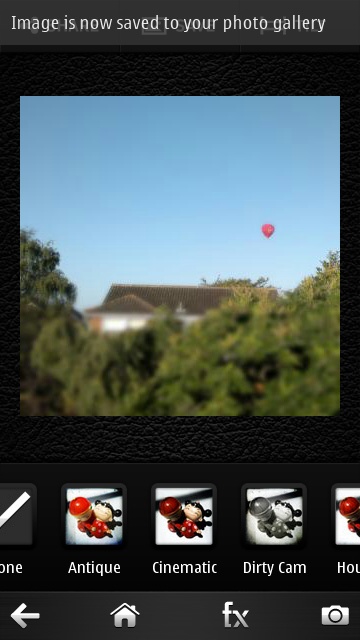 The range of effects in Sophie Cam is somewhat limited, around 30, split into three 'packs' for some unfathomable reason. Here's 'Cinematic' being applied and (just because it's new to the app) 'Tilt Shift again, in the process of being applied: 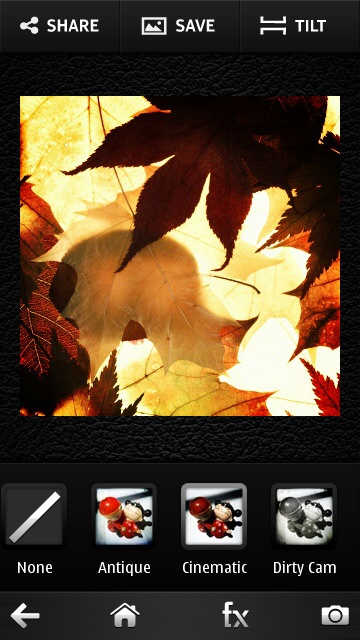 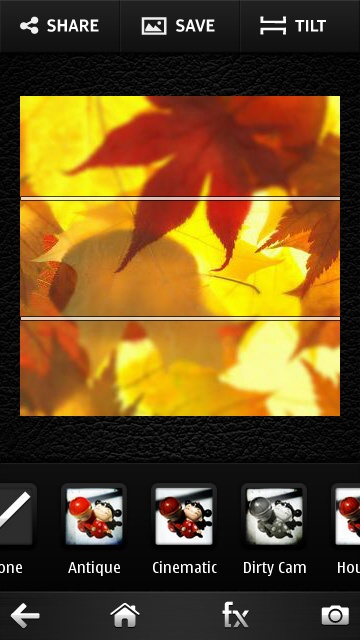 I've no idea what 'Hipstar' means, unless it's a version of 'Hipster'. Which is also rather ambiguous, harkening back to the 1960's. Here's the 'Sun Drop' filter being applied: 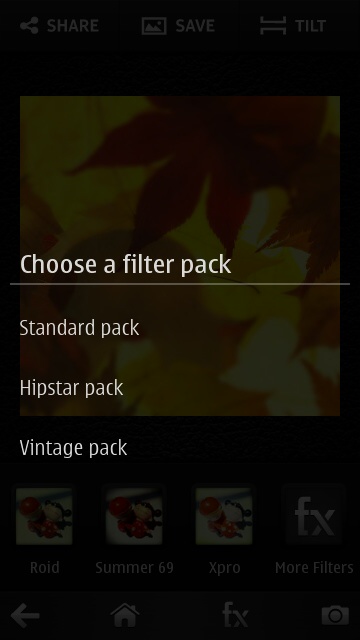 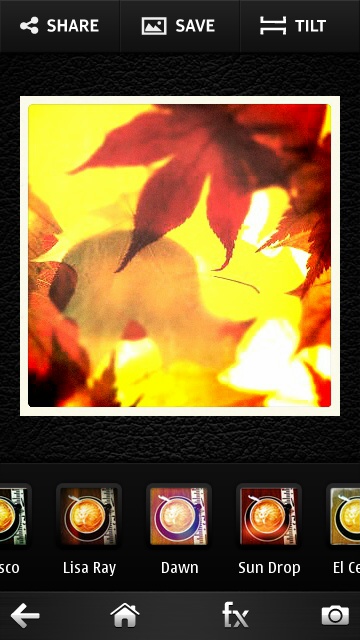 When saving photos, you're prompted to save at 600x600 (0.36Megapixels) or 1200x1200 (1.4MP), with the latter preserving a reasonable amount of original detail - rendering a 1.4MP image in Sophie Cam takes about five seconds on a Symbian^3 class smartphone like the E7.

Much of the time you'll share directly to a social network though (for which it seems that the 0.36MP rendering is used), with the usual system of authorising the networks you want (currently just Facebook, Twitter and Flickr) up front and then their icon appears in the sharing/posting dialog, below right. You can tap to enable or disable each network on a per-photo basis: 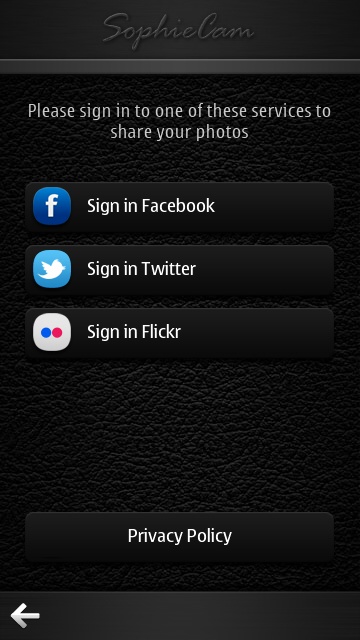 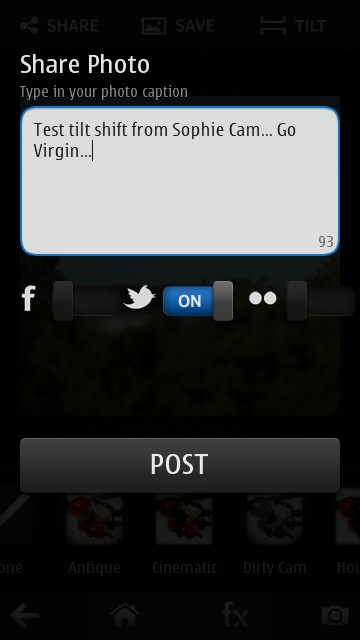 You can view my test tweet via Sophie Cam online here. Mind you, it's a crying shame that the higher resolution 1.4MP renders aren't used for social sharing - am I the only person in the universe to want to click on a socially-shared photo on Twitter or Facebook in order to see it full screen or at a slightly higher resolution?

Sophie Cam isn't the first Symbian application to offer photo filters (see also ShaderFX Photo, for example) and it won't be the last, but it's got a very slick, textured UI, the filters are intelligently curated and work quickly with real time previewing, plus it's trivial to post to just the networks of your choice.

Sophie Cam is available free here in the Nokia Store in ad-supported fashion or here in paid (no ads) form. It hasn't quite converted me to being a fan of 'fun' photo-mangling utilities, but it had a pretty good try. In the absence of Instagram on Symbian, this is probably the next best thing in this market.