To the uninitiated, Carcassonne could be classified as a puzzle game; however, it's actually a remake of a very old German board game. If you can imagine playing a Pipe Mania type of game, with different types of classes, as well as shapes, of pipe, along with people to station on strategic points, then you might just have an idea of how Carcassonne plays out. If a cerebral board game that goes at a gentle pace is your kind of thing, then read on. 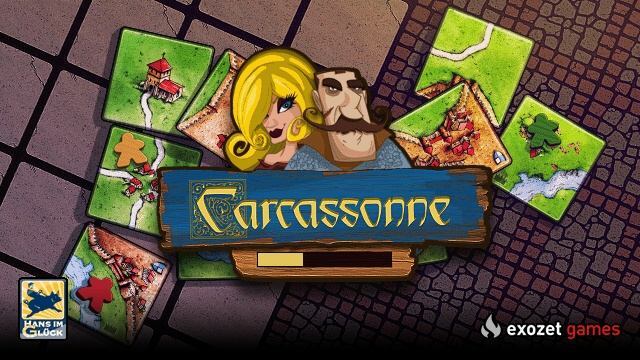 The game consists of a 2D map, supposedly of the mediaeval French town, Carcassonne. The game starts with a single map tile, and players lay a new tile on each turn, which area dealt randomly from a pool of 71. The new tile must be placed in a way that links features on the tiles it adjoins to. Specifically, roads connect to roads; fields connect to fields and cities to cities. There are variously shaped city tiles, and various types of road junction. The Symbian version of Carcassonne supports up to four players, which may be any combination of humans or computer. 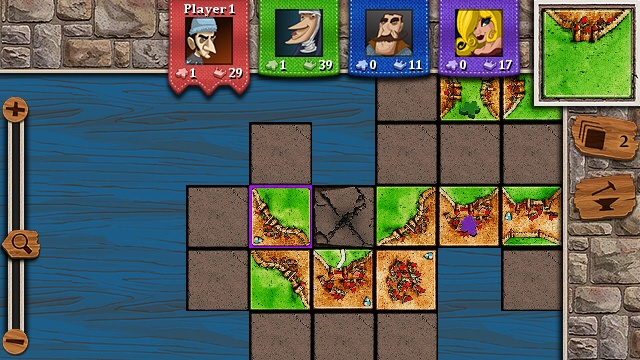 After placing a tile, you station a "follower" (i.e. a person or minion) on one its features – e.g. within a city, on the field outside, on a road or beside it. If a similar part of the terrain on a connecting tile is claimed by another player, you cannot claim it; at best you can share it, depending on the tiles that are placed afterwards. Once all the tiles have been placed, the game tots up the scores for all tiles, and the highest score wins. During each turn, all features (apart from grass fields) are scored when they are completed— which means the feature contains no unlinked points or sides – and any followers you stationed there will be returned to you for reuse. At the end of the game, all incomplete features are scored too. 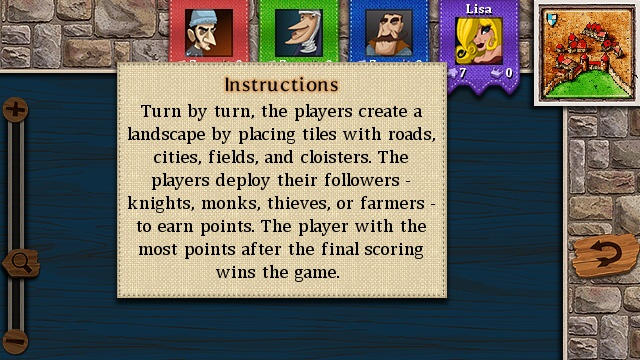 Confused? I was too – the rules (which are provided within the game) are pretty complicated to follow, and I found it best to learn the game heuristically. My success rate was not exactly consistent though! When you're placing the tiles, the game interface is a tad on the small side of being finger friendly. However, there is a zoom slider, so you can tune things to your liking – just don't expect buttery smooth scaling though. 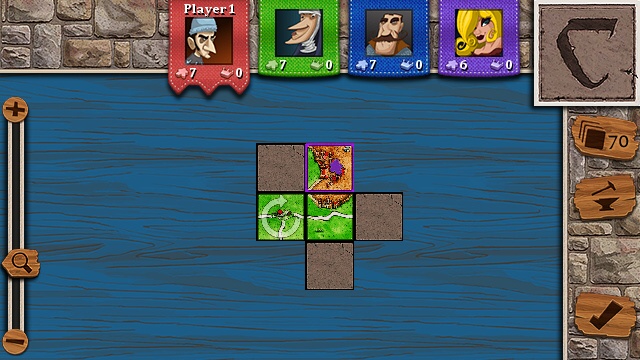 Placing and turning a tile

Once the tile is placed, the game automatically zooms into the tile to let you choose the area you'll be placing a follower. Not before, however, you can tap on the tile to rotate it – if doing so is possible for its position on the board. Other possible positions on the board are shown with brown stone tiles. However, squares that cannot be used (because the surrounding tiles have no solution from the tile pool), are shown as a broken stone tile. 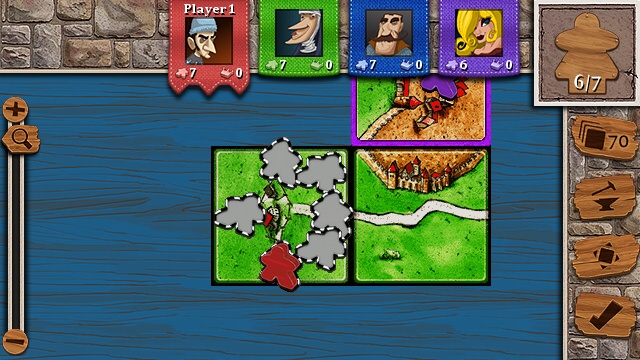 Placing a follower on a file

As mentioned above, you can select several players to be artificial intelligence. Each option has a distinct personality, with an avatar, name and in-game comments. This was a nice touch, but given that the game could not continue until you manually dismiss the comments, I found them quite tiresome. 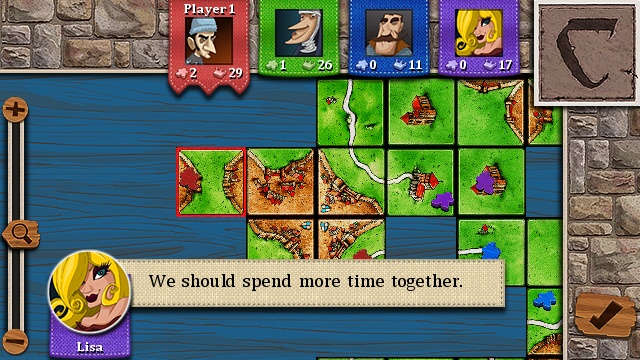 AI messages get in the way

As with many games, Carcassonne presents you with the interesting dilemma of opting to go for lots of low-scoring features (e.g. a tiny city), or to hold out and hope your luck holds to give you the tiles that you need before the game ends (e.g. a city made of five or more tiles). Another way in which the 'hold on for just the right tile' strategy is risky is that competitors can lay tiles that will interfere with what you were planning to build – and vice versa if you want to play aggressively.

Carcassonne is £3.00 in the Nokia Store, and even though I found it difficult to 'grok', I enjoyed playing it and trying to work out the best strategies.