There comes a time when you encounter something perfect. Think Dudley Moore encountering Bo Derek in '10'. Think lying on a sun kissed beach with cold beer on tap. Now think of a mobile game so perfectly executed, so perfectly drawn, so perfectly planned, so perfectly soundtracked, that there is, literally, nothing that can be added or improved. Nothing. What you have is Sparkle. I'm not sure we've ever given anything this high a score before - and now it's on sale, i.e. half price, so grab it and check you agree?

Writer's note: Although Sparkle has been out for ages in the Nokia Store (it was one of the launch HD games for Symbian^3), we hadn't reviewed it on All About Symbian because I'd reviewed it for the Ovi Daily App Blog instead, though of course I did link to the latter. However, that was well over a year ago and, significantly, Sparkle has now seen a price drop, halved, to £1.50. Making what was already a top title now a 'top title at a bargain price' and, in our estimation, worthy of a fresh review (with a few sentences in common and with some new screenshots) here on the Symbian motherlode, AAS.

From the start, Sparkle is moody and atmospheric. The loading screen is the best part of 30 seconds, but this is forgiveable given the graphical splendour being loaded up and because you can often leave Sparkle safely paused in the background while you answer a call or something else fairly trivial - though it will be dropped out of RAM if you do something really memory intensive, of course. 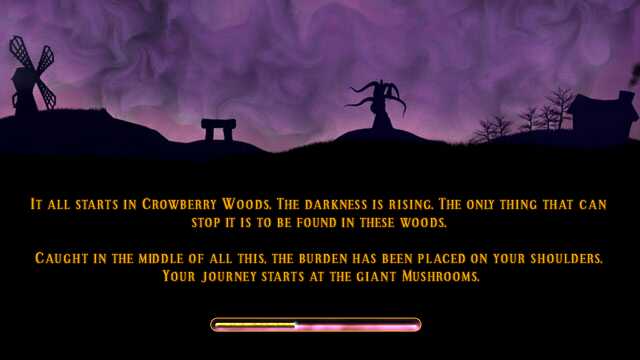 Never mind the storyline and trappings (orbs, runes, amulets), this is effectively a high-gloss version of Zuma, a bubble-shooting arcade puzzler that's been available for almost every platform over the last 10 years. What matters here is the style and slickness on Symbian. Every screen is superbly, repeat superbly, drawn and obviously hand-crafted for nHD and Symbian. 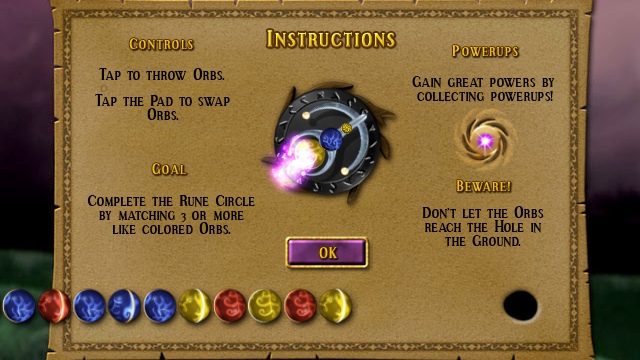 As mentioned in the help screen above, 'power-ups' are important. In fact, they're not only important, they're a whole heap of fun! Fire an orb at a powerup that appears on screen and you then 'have' that power for a few seconds or throws. There's a wide range of power-ups, from slowing down the advance to reversing it, to turning all balls within a certain radius to the same colour as your projected ball and thus blasting them out of existence. And much more besides. All the power-ups are 'good' though, so you've little to lose by hitting and claiming them... 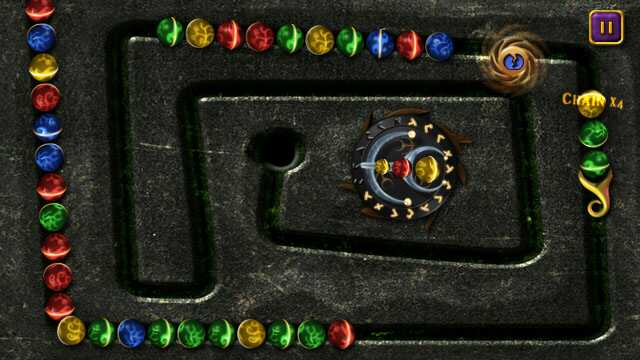 In a twist that elevates Sparkle from its predecessors, there's also the concept of 'amulets' that you can win and then wear whenever you need to, giving you one of the particular power-up powers (if you see what I mean) for all the power-ups encountered in that level. Choosing which amulet to wear for which level is presumably something that becomes more important as you get further into the game and as the levels get harder, though my favourite by far was the 'Purple Flame' that effectively just blasts everything out of the way. 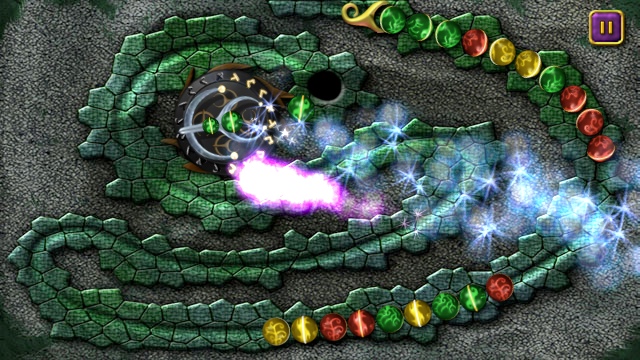 The orbs themselves fall back according to the (approximate) laws of physics, i.e. with believable inertia and taking a finite time to do so, giving plenty of scope, after a mass orb elimination, for firing other orbs into temporary opened up gaps, in order to hit another target, such as a power-up.

Throughout all of this, there's utterly beautiful, silky smooth animation of orbs, your shots, the willowy darkness emanating from (presumably) the pit, the sparkly power-ups, accompanied by moody and often exciting (in an Indiana Jones way) music, with sound effects and whooshes where needed. It's very immersive and very enjoyable. 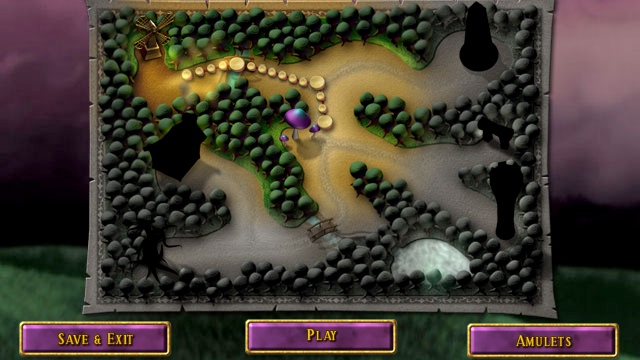 There's a wide range of different backgrounds and orb patterns, in theory representing your progress through the mystical land - complete with maps and occasional profered choices of direction - as if it mattered! It's all about blasting the orbs... 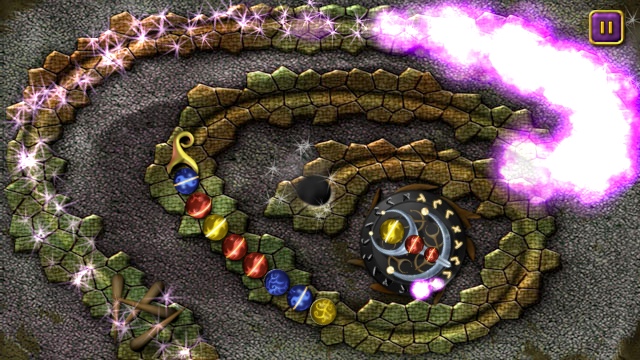 In terms of difficulty, Sparkle is perfectly pitched again. Slow players will still get a fair way into the game, while those with lightning reflexes will also face a challenge just a short while after. In addition to the main game mode, which you'll finish at some point in the distant future, there are 'challenge' and 'survival' modes, taking levels from the main game and seeing how quickly you can complete them or how many balls you can blast away before you're overwhelmed (building up different 'ranks' in the meantime). 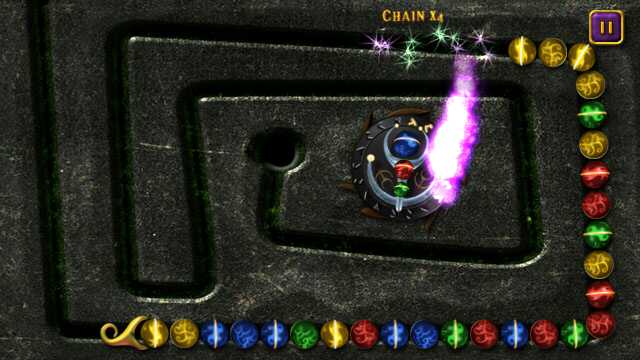 Music and sound effect volumes can be adjusted separately, which is very good to see, and there's even a 'color blind' mode, in which patterns get added to the balls, for recognition even when the colours can't all be distinguished clearly. 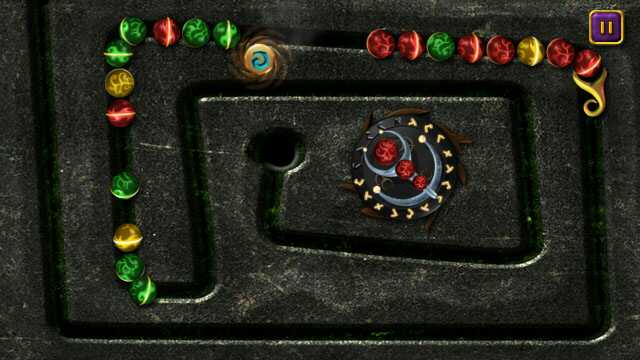 I'm a sucker for something that's elegant, even if the original premise sounds unexciting - Sparkle definitely fits this description. Even if you've never thought you'd get into a bubble/ball colour matching game then I reckon this might surprise. At £3.00, it was well worth the money - at £1.50 it's something of a steal and into impulse purchase territory. 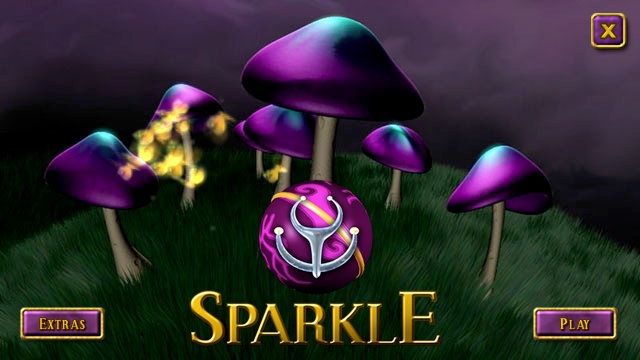 There's a demo video from the developers, which I've embedded below. Do note though that the graphics in Sparkle aren't shown off to best advantage in the footage. You have to see them in rich AMOLED hues on your Symbian smartphone to really appreciate the work that's gone into this title.