Getting the latest news is one of the most basic needs of an always connected smartphone user, whether through an app or the mobile web. 'CNN app for Symbian' provides news in both text and video across a varied range of topics and geographical regions. It also supports the emerging field of citizen journalism by integrating CNN’s iReport service. How well does it all fit together?

With only two navigation tools, the CNN app has a refreshingly simple layout. There is a toolbar across the bottom with context sensitive icons, and a horizontally scrolling list of news topics across the top.  From the homescreen, the toolbar has icons for news headlines, iReport, and videos.

The topics covered by CNN are Top Stories, US, Africa, Asia, Europe, Latin America, Middle East, Business, Sport, Entertainment, Tech, and Travel. This horizontal list is present in both the text-based and video sections. Given that CNN is a US based news service, UK residents may well be disappointed by the lack of focus on British news. 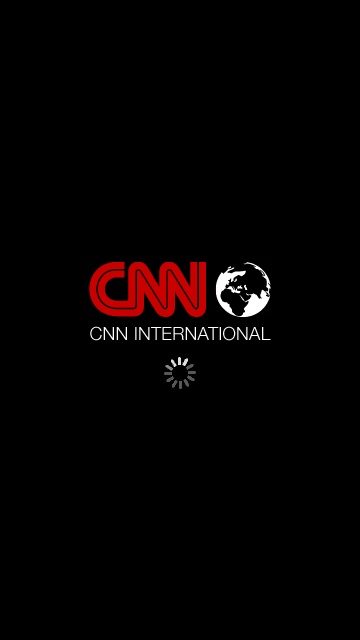 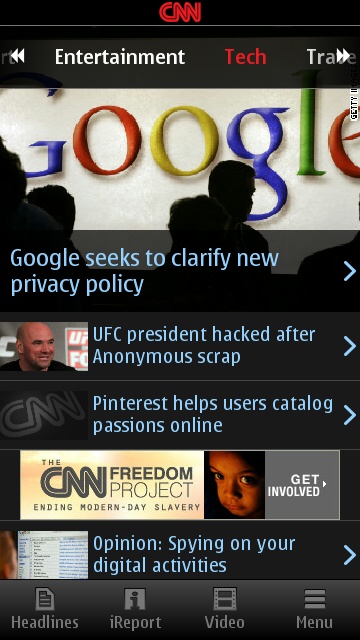 The CNN app and its news headlines.

While viewing text stories, the toolbar icons change to show only “Back” and “Share” – somewhat staying within the Nokia Belle style guide. The Share menu launches all the options I consider mandatory for this type of application: SMS, Email, Twitter, and Facebook. Each news story leads with two bullet points that give context for those not familiar with the background of the story – as a reader, I appreciated this. 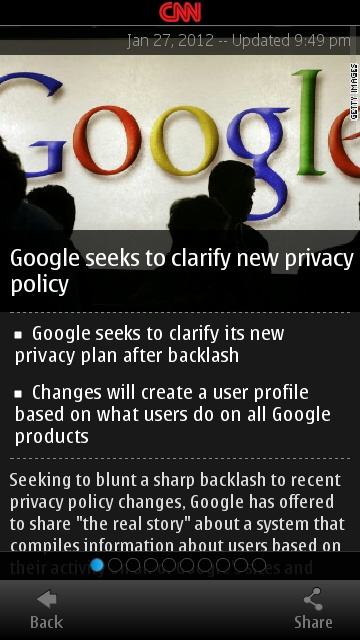 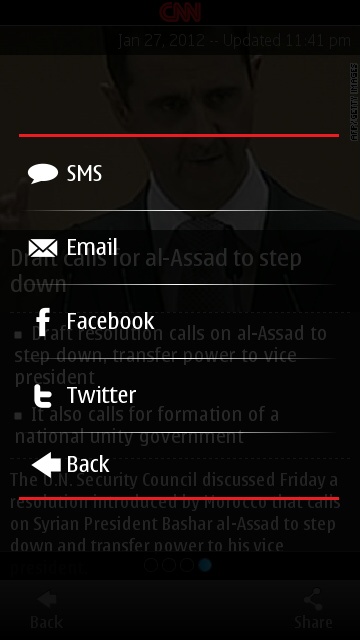 Video story lists are presented clearly in either portrait or landscape orientations – just like the text based stories. However, the landscape mode presents large thumbnails in a horizontally scrolling carousel that really sells the content.

While most applications that stream video opt to use Symbian’s internal player, CNN has a custom player, which streams in high quality. Tapping the screen while videos are playing reveals controls for volume, timeline, pause, and back (to video selection). There’s no way to share a video though, which is a shame. 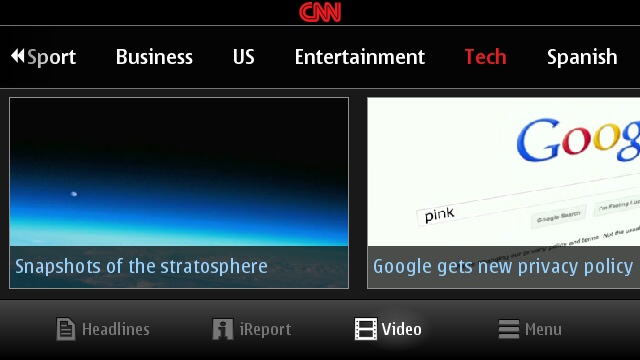 The CNN app has a homescreen widget and supports push delivery of breaking news. However, during my testing neither appeared to work. This was either due to connectivity issues at my end or something that will no doubt be fixed in the next version. 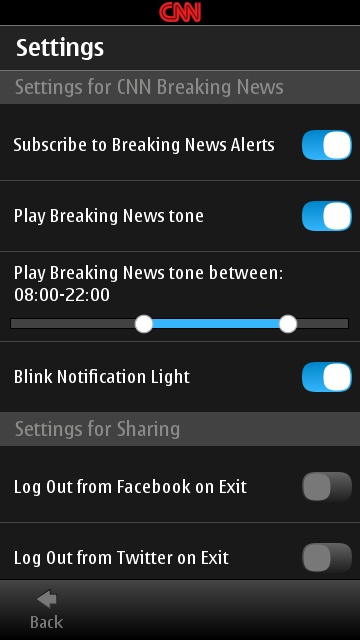 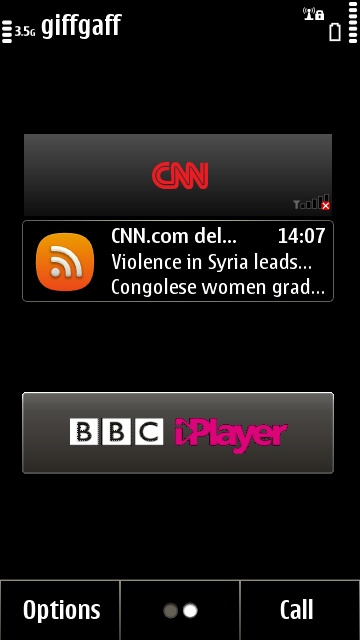 This app isn’t just about content delivery though – CNN has an initiative called iReport which embraces the emerging field of citizen journalism. As the name implies, this is where members of the public can contribute reports, photos, or videos from the scene of an event. Other, more open, platforms for citizen journalism include Blottr and Wikinews.

Once in the iReport screen, the toolbar changes its icons to Back, Featured, Assignments, and Submit. “Featured” gives a list of stories and photo essays submitted by readers. Meanwhile, “Assignments” contains posts by CNN requesting specific subjects for iReport features. 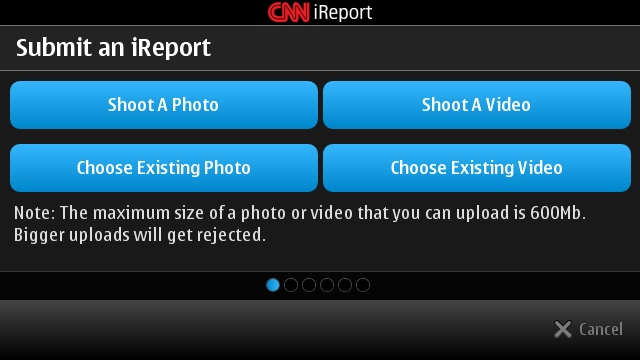 The first step in story submission is selecting or creating a photo or video.  You then select which assignment you’re submitting to, and finally enter a title and type your story. You’ll find the current version (1.3) is a little out of date as it does not support Symbian Anna’s split screen keyboard, so navigating large bodies of text will be tricky. Instead, I suggest you type descriptions in another application, such as Notes, and then paste into CNN. 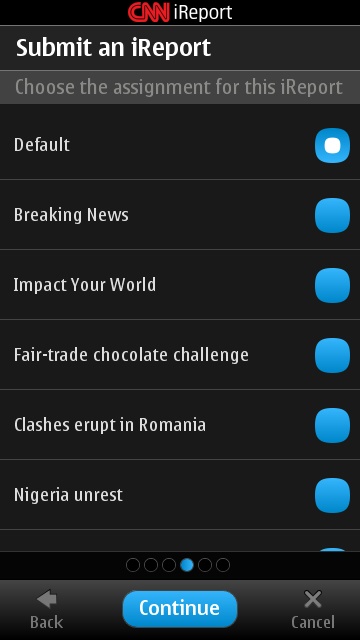 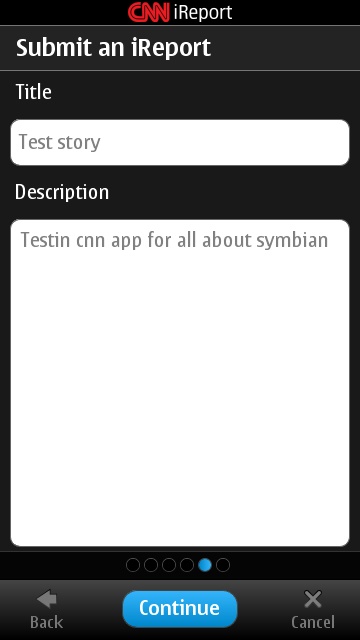 Choosing your assignment and telling your story.

You obviously need an account, and you can create one if it’s your first time. There’s no guidance on creating a password though – I had several failed attempts before reading iReport’s desktop website. Apparently, the maximum password length is 10 characters, and I typically use more than that!

I was impressed with the CNN app – the text and video news are very well presented, and you can submit your own news! I’m glad to see a news service inviting the public to contribute, and I hope other services, like the BBC, will follow suit with similar apps for Symbian. You can download the CNN app from the Nokia Store for free.