It's all very well having 'Equaliser' presets in Symbian's Music player, but what about if you want a different EQ profile? There's no way to edit the defaults, out of the box, but smartEQ promises to allow this, plus the creation of your own custom EQ profiles. How does it work and how effective is it?

Before delving into smartEQ, it's worth noting a few things:

So, if you're an audiophile, if you're happy with Symbian Music player, and if you want more flexibility in EQ beyond the built-in presets, then smartEQ can indeed help. It's a commercial application (but inexpensive) and effectively plugs into the Music player preset system, as shown in the screenshot, bottom-right. 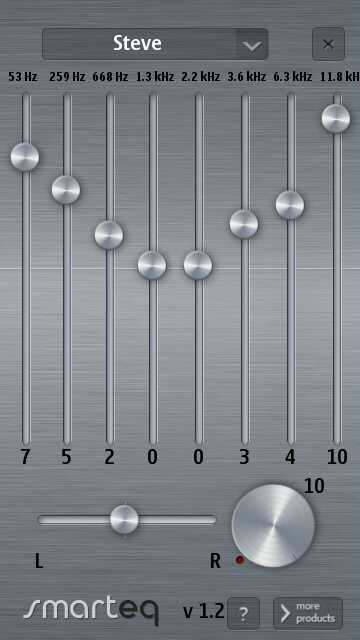 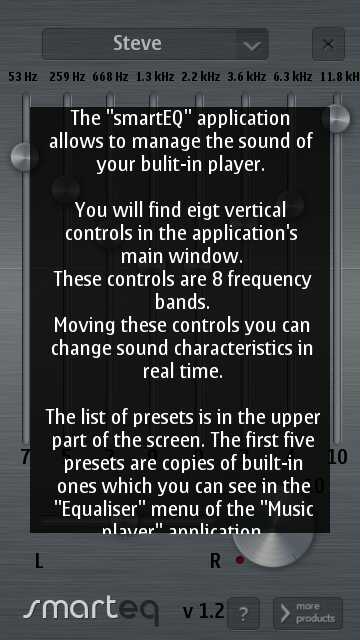 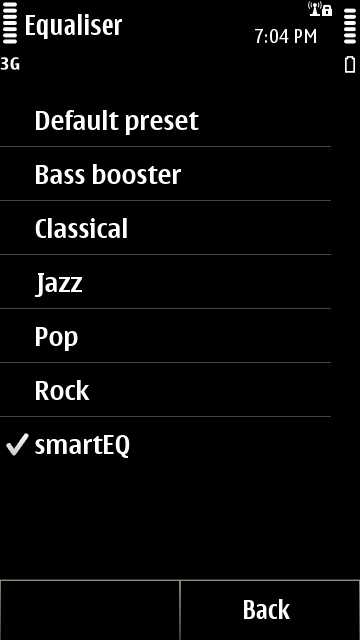 No less than eight frequency bands are represented here, which should be enough for most people to fiddle with, plus left/right balance bias, as shown, and an extra rotary volume control - just because the programmer felt like showing off(!) You can make as many 'New preset's as you like and give them all sensible names, and you can adjust any of the existing Music player EQ presets, albeit with all of this only having any effect while 'smartEQ' is selected in 'Equaliser' inside Music player.

Impressively, everything can be adjusted in real time, i.e. you can fiddle with the sliders while listening to a favourite piece of music and hear the difference immediately. This, naturally, makes finding a favourite EQ profile much easier.

Having set up smartEQ with a new profile (in this case, the imaginatively-named 'Steve'), you can exit the utility, leaving 'Steve' in place and it will still get used by Music player, i.e. there's no requirement to have smartEQ actually running all the time - just as well, as it would otherwise have been something that had to be auto-started with the phone, etc.

In terms of audio quality, I had no issues and playback was just as smooth as with the built-in presets - I'm guessing that the chipset in the modern Symbian phones is doing most of the work anyway.

smartEQ is smartly done (written in Qt), works brilliantly and doesn't cost the earth. In fact, the only reason for not awarding it an 80+ score is that the vast majority of Symbian users will probably never need it - or even conceive of the possibility that they might need it.