As a maths scholar myself, I do love it when some of it ripples through into the real world. In this case it's Cam Measure, written in Qt for Symbian touch devices, based around one of the simplest mathematical constructs of all - the right angled triangle. Armed with a camera and accelerometer-equipped smartphone, you've then got the basis of a system for measuring distances and heights - all without actually moving from your current position. That's the theory, anyway! 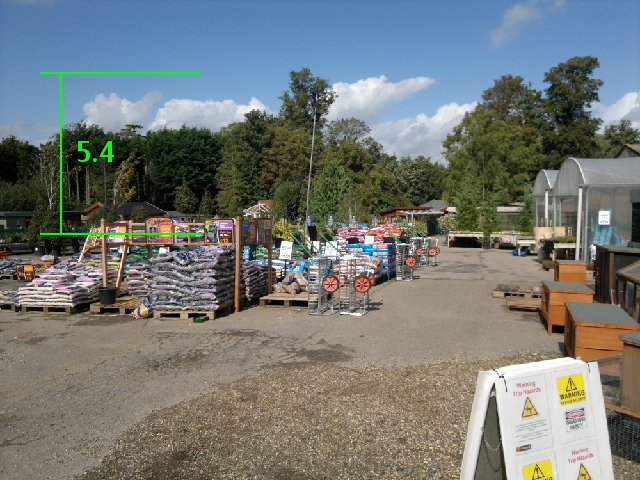 So you've got something in front of you - a landmark, a tree, a monument - or even a simple pole or mast - and you want to know how far away it is and how high it is. Well, ok, that's not something most of us want to do every day, but it's certainly a cool thing to be able to work out without moving. So your friend points out a statue ahead and you're able to calculate, on your smartphone, its distance and height - to within 10 to 20%, at least. There's not enough precision here for the information to ever be useful professionally, but even getting somewhere close to the exact figures might occasionally be useful. It's certainly a cool facility, made possible by the sensors and camera in the modern Symbian smartphone.

Here's how it works. Using your height and the angle 'down' to the base of your subject, the 'long' side of the relevant right angled triangle can be calculated. Knowing that distance and the angle 'up' to the top of your subject (and not forgetting the offset due to your height), the 'short' side of that triangle can then be calculated - the height of the subject. Easy enough maths, but great to have an application do all the hard work for you.

And so to Cam Measure. You know your phone's height off the ground - essentially your height minus 15cm or so for most of your head. You can point it towards a spot at roughly the same height on your target (pole, statue, etc) and then 'calibrate' the shot (under 'Options' in Cam Measure) - this uses the accelerometers and magnetometer to take note of any slope/gradient involved and to work out any relevant offsets unique to your phone and how you're holding it.

This only takes a few seconds and makes the finished figures much more accurate. With a baseline set, you then tilt the phone down until the base of the desired object is in the centre of the viewfinder. Cam Measure makes this easy by auto-zooming in, so that you can set it as precisely as possible. At all times, guidelines appear in the viewfinder to help you keep the phone level. As you tilt down, there's a real time calculation shown of the distance away. 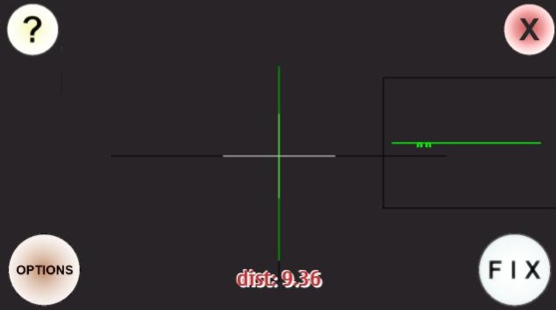 After tapping on 'Fix' to fix the distance, you then tilt the phone (and its camera) up again, to point to the top of your subject - again, there are guidelines, plus a zoomed in (and zoomed out) view, plus a real time indication of the calculated height. Note that the maths is easy enough that each calculation only takes a tiny fraction of a second, so the numbers are all real-time.

Finally, you tap on 'Fix' again and you then have your two numbers, along with the graphical option (see below) to save a record of these to disk. 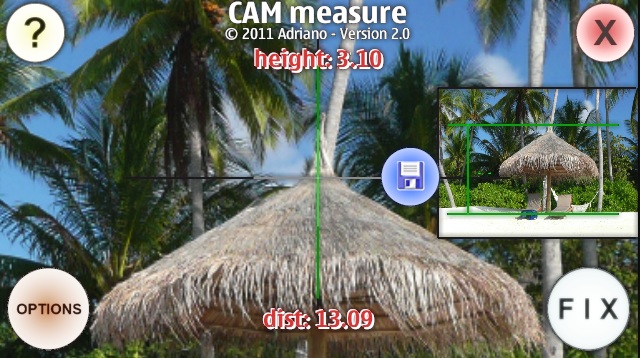 All of which does actually work surprisingly well, once you get the hang of it. There are some glitches in the current version though, partly explaining the less than stellar score. As shown below the saved images (only VGA, by the way) don't include the calculated distance - only the height. Moreover, the indicators showing the calculation lines don't always match up to the image, again as shown below. All somewhat frustrating. 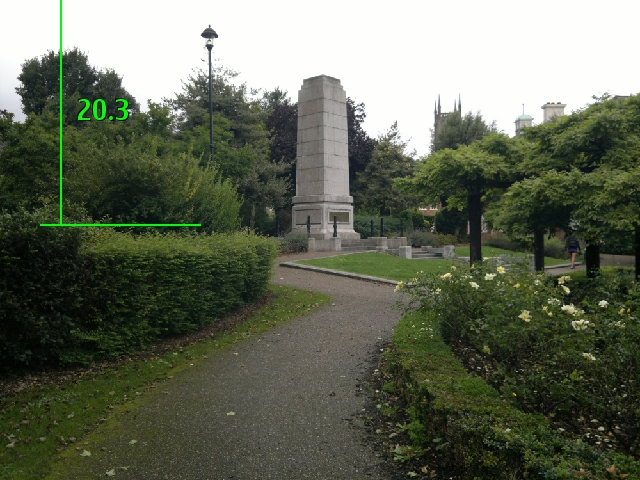 It should also be noted that, while a simple (straight) slope is taken account of (at least to a first 'approximation'), it does introduce other errors, not least those from you the user, since your natural inclination will be to stand upright against gravity rather than perpendicular to the ground. As I say, this shouldn't matter too much in terms of trigonometry, but it does make using Cam Measure a tad less intuitive and some of my 'slope' measurements were less accurate that those tried on completely flat ground. Here's an example on a 10% gradient High Street, for example: 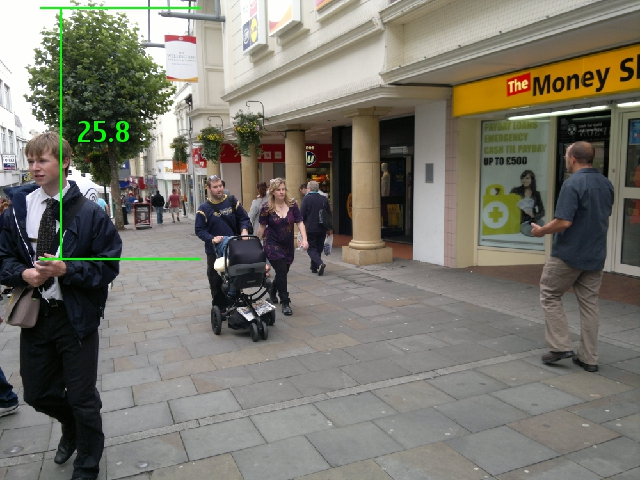 Again, in the Cam Measure capture above, the measurement lines don't quite match what I was aiming at.

Used properly and carefully, Cam Measure is capable of getting distances and heights to within about 10%. It's true that it's more a 'proof of concept' application than a killer app, but for a mathematical person like me, the integration with my smartphone hardware made me smile. If this all sounds like you too, then grab it from the Ovi Store - the developer is hard at work on a version 3 too, hopefully with the niggles mentioned above all sorted out.