It's a problem, to be sure. You're on holiday and you want to take your Nokia N8 or X7 or similar onto the beach. But, rightly, you're utterly paranoid about sand and splashed seawater ruining your expensive smartphone. Or perhaps you like hiking - or canoeing or any other outdoor pursuit that involved water in any quantity. What you need is this, the BeachBuoy Waterproof Case - I have to say that I'm enormously impressed.

A small disclosure before I start: Proporta do help out with accessories, prizes and more, on my Phones Show Chat podcast, so I'm inclined to think well of the company. However, I'm objective and I've criticised some of their accessories just as hard as I'm praising this particular one. See the photos below for proof of the product in action!

The story so far: I'd been nagging Proporta to send over a review sample of the BeachBuoy for years. Literally. Yet somehow one never turned up. It's possible that this was due to all existing units being 'out' with Proporta staff on the nearby beaches(!), but more likely it was because there was a big product revamp going on. And now it's here, with a "New, Improved" indicator on the BeachBuoy product web page. 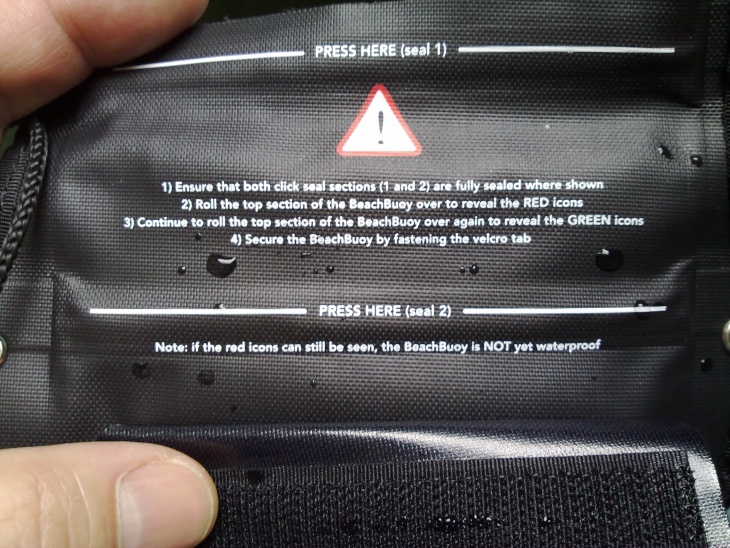 Apparently, it's made of a new and more durable material - I was genuinely impressed by the build quality. A stitched outer seam holds the transparent layers together, with a tough plastic welded seam all around the business area of the case. The open end (top) is handled through two 'ziplock' style press-seams, held under tension through the simple act of rolling the top up, fold by fold, and then using the strong velcro to hold the folds in place. As shown in the photo above, these basic steps are helpfully listed on the underside of the fold - just to make sure everyone gets the hang of it!

Test one was fairly mild. Using my N8 in the BeachBuoy out in the UK summer (so that's pouring rain, as per usual): 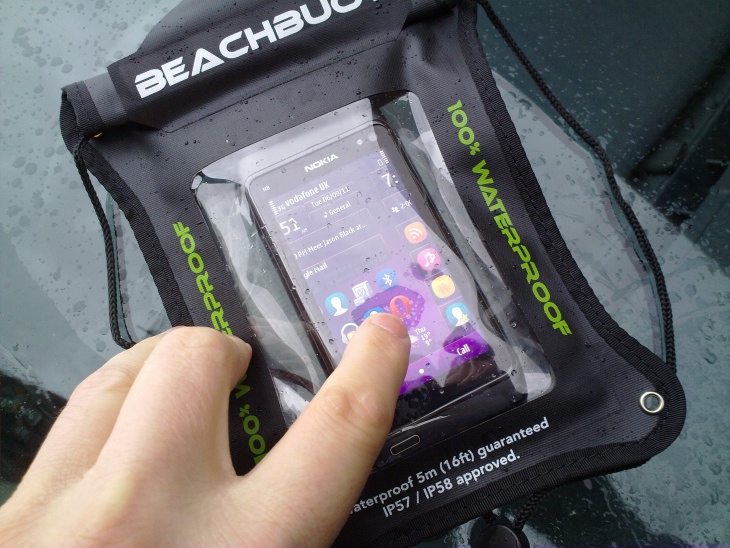 Surprisingly, touch response wasn't affected much - the wonders of capacitive touch technology? The plastic in use here is well specified, being thin enough for good visibility and easy device operation, while being tough enough to keep sand, dust, water and so on at bay.

Proporta claim that the BeachBuoy is waterproof down to 5 metres of pressure and that it's IP57/IP58 approved, so clearly I needed to be a little more extreme. Not having a seaside to try it out at, I opted for dunking my N8 in a bath and basin of water (latter shown below).

I held it underwater for a minute, swiping the touchscreen and starting a few apps - something which wouldn't have been possible on ruggedised phones like the Motorola DEFY, since capacitive screens don't work well when wet). I then extracted the BeachBuoy and finally, took out the N8. The device was dry as a bone. 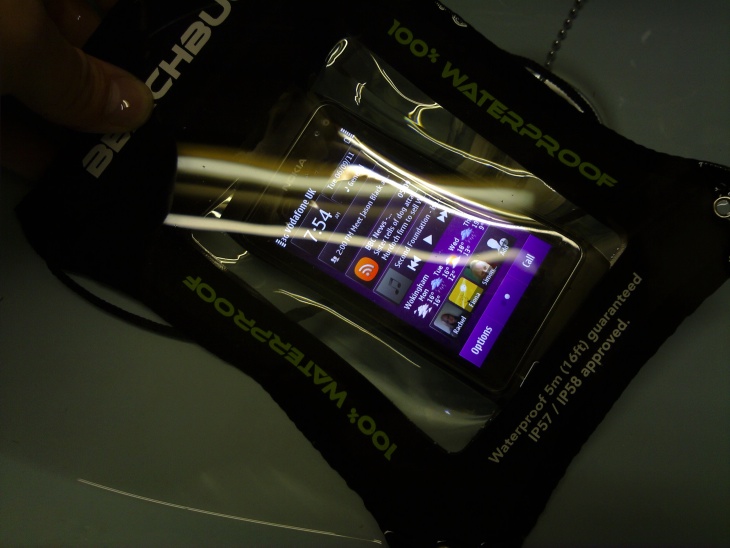 Interestingly, I said 'hold' above - the BeachBuoy has enough trapped air inside and there's enough buoyancy in the fold mechanism and materials that even with the weight of your device inside, the accessory should float - meaning that you can take it out on a boat trip and if the BeachBuoy does fall overboard then it'll sit there on the water with your precious smartphone, waiting for retrieval.

Not that it should fall in the first place, as eyelets in all four corners with a supplied lanyard cord mean that you can hang it from your neck or rucksack as required. The eyelets are properly finished, as is the cord, with quick release/adjustment catches.

Using a smartphone in situ is easier than you might think, even virtual qwerty text input works, though resorting to the T9 virtual keypad on the N8 produced slightly faster results because the target areas were larger. Audio output isn't significantly affected by the layers of plastic, though in the N8's case the flush speaker slot does mean that pressing plastic against this area blocks output, as indeed it would if resting on a sofa or bed.

I was interested to test the N8's camera while in the BeachBuoy - it seems that, with the plastic of the case pressed up close to the device, photos are quite acceptable. At least, testing with a pristine review case - after a few months of hiking and boating the finish would have lots of micro-scratches, of course. But, in principle, there's no reason why you couldn't attempt even underwater photos or videos with your smartphone in a BeachBuoy. Just make sure you press those seals together properly and you'll be fine.

Such a waterproof case isn't just for smartphones, of course - this could also be useful for your camera or wallet or any combination of other items that need to stay dry and sand/dust-free.

At £15, the BeachBuoy is good value, in my opinion. I'm sure there are other waterproof wallets out there, you could even improvise with household freezer bags, but the combination of durable materials here, of multiple seals and tough lanyard mounting, mean that this accessory is a worthwhile investment to keep your smartphone pristine and safe when there's H2O around.