Run and jump and run and run. There's been a little bit of an explosion in the "always running" game on Symbian in the last few months, and what I've found wonderful is that each game is subtly different and requires a different way of playing. While each of them are simple "one key" games, each of them has their own flavour. "Dalton -  The Awesome!" comes over as a delightful B-movie Zombie film.

Trailer for Dalton, by developers Colorbox

The goal here is to run as far as you can into the game, avoiding the obstacles as you go along. These are of three types - obstacles on the ground (normally spikes, which will cost you a heart of energy, and oily mud which will slow you down); great big gaps in the running route because you are vaulting over the top of buildings so you need to jump from roof to roof; and zombies.

Which gives this lovely b-movie feel. You have the slowest horror creation around, the shambling undead from "The Night of the Living Dead" looking to eat your brains, roaming the roof. You'll need to jump over these or they'll chomp some of your energy, and you only start with three. Zombie purists should look away now, because joining the shambles you also have the modern "fast" zombies (see such films as 28 Days Later). They're always behind you, running almost as fast as you. Remember the mud that slows you down? Here's why you want to avoid running through these pools - you'll get caught. And when the squad of fast-zombies catches you, it doesn't matter how much life you have left, you're going to be torn limb from limb, and that's game over.

The final 'tweak' in the game to make Dalton stand out addresses two gameplay areas very well. These running games can be very transitory, so there needs to be something that keeps you coming back for another game. This is dealt with by the souls of the zombies. Whenever you kill one of them, mostly by jumping on them, Super Mario style (but you sometimes pick up a gun and can shoot them), you collect their souls, and however many you collect will be saved by the game so you can build up a nice bank of souls. 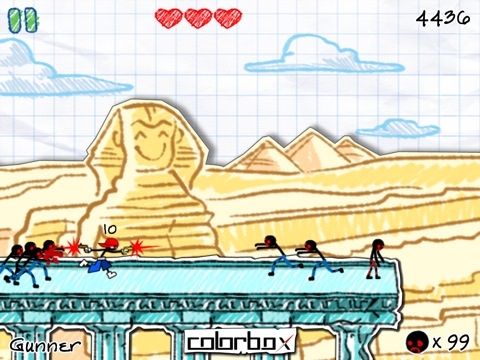 Between runs, these can be used to upgrade the effectiveness of the three power-up items you can pick up while running - the skateboard gives you a speed increase and lets you jump much further; the ability to turn into a giant and crush everyone with your invulnerable size; and the shooter, which gives you a gun to shoot the zombies in front and behind you in the head.

Upgrading these power-ups lets you keep them in use for a longer period, which in turn lets you gather more souls and gather more upgrades!

This also addresses the second issue of the difficulty curve of the game - while it is quite flat, the changing level of the power-ups means that the fabric of the game changes as you continue to play the game through days and perhaps weeks on your smartphone. And I think this is a keeper, because along with the good game mechanics and design, the look and sound of Dalton is appealing.

Going for the "doodle" approach to graphics, the hand drawn look provides a distinctive style to the game, with a certain "hip/cool" look to the central character. The animations in the game, from the running to the jumping and shooting are easily visible, and the whole thing, from the menu screens to the dialog boxes, and with the rotating backgrounds to have you running in Egypt, New York and others, it all feels holistic. And the sound is as memorable as anything in a John Carpenter film. It's bassy, driving and effective in creating atmosphere in the game. I just wish it didn't loop back to the start of the sample as quickly as it does.

But this is Dalton The Awesome, and I have to agree with this. A cracking little arcade game is on offer here, and while its longevity is going to be measured in weeks and not months, it's a worthy download for the summer months.