Twitter is a must-have on any mobile phone these days. Fortunately, there are no shortage of applications out there to fill that need. TwimGo is a relatively new Twitter application, written by Tommi Laukkanen. It's available for both Maemo and Symbian, and is available for free in the Ovi Store. If you've outgrown Nokia Social, but still want a free Twitter client, is this the one for you? Read on to find out.

On first looks, you'd be forgiven for thinking TwimGo had a passing resemblance to Gravity or Tweetdeck. There's nothing wrong with that, and there are only so many ways to display a Twitter timeline, but TwimGo does offer some differentiating design factors to set it apart.

The main page of TwimGo shows six tweets at a time, in a kinetically scrolling list. Similarly to Gravity, it has a 'light' and 'dark' theme to suit your mood and ambient lighting (and desire to be friendly to your OLED-powering battery). Along the bottom of the screen is a handy toolbar with five buttons: Home, @ replies, make a new tweet, refresh, and main menu. Even though there is a manual refresh button, TwimGo also has an automatic update setting for intervals of one, five, fifteen, or thirty minutes. 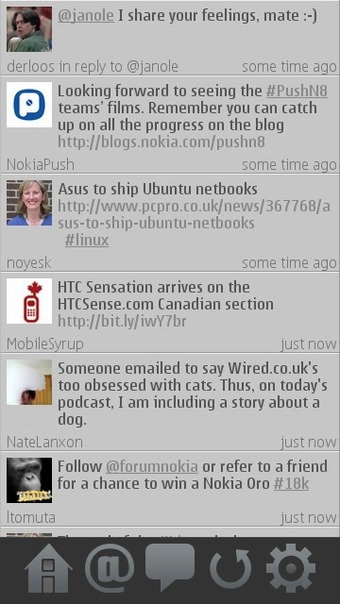 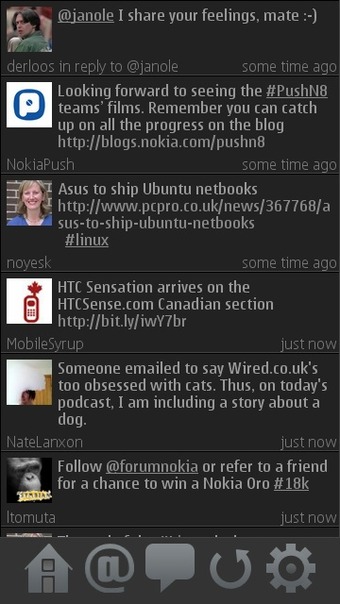 When posting a tweet, there are the expected Tweet and Cancel buttons. Additionally, there is a large button which attaches to your current location to the tweet. Many other Twitter clients seem to go for the approach of burying your location preference deep within menus, with the assumption that your preference will be the same for every tweet. I prefer the approach taken in TwimGo, providing an obvious trigger for the, probably rare, times that you will post a 'GeoTweet'. 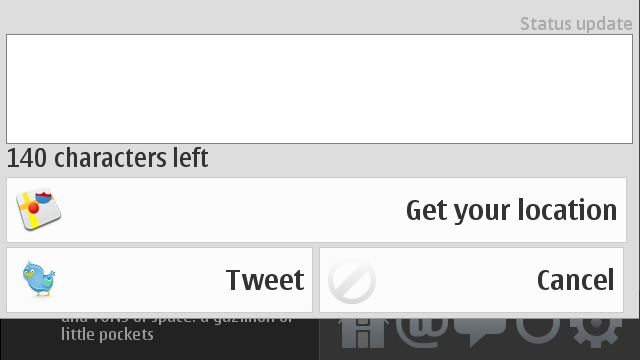 The most striking design facet of TwimGo is seen in landscape mode. Unlike every other Twitter client, TwimGo formats those six tweets into two columns of three. Whether you prefer this format or not, credit has to be given to Tommi Laukkanen for creating a fresh look for the Twitter timeline. I found it pleasing to be able to let my eyes roam in both directions, instead of the linear up and down movement that is normally required for reading Twitter. 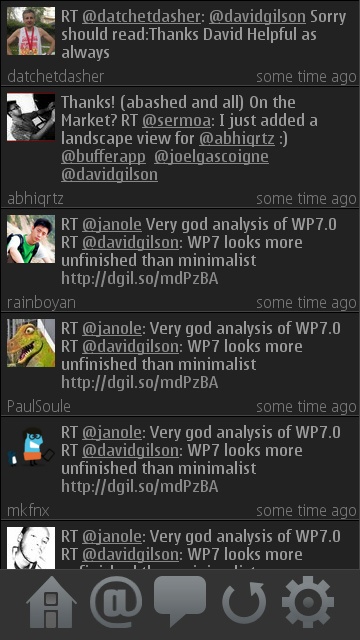 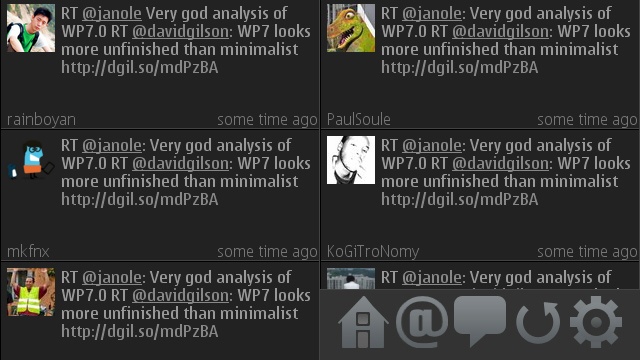 To actually do anything with a tweet, you have to tap through into a single page view. Other Twitter clients utilise drop down menus or long press menus. Having to go through to this single page view isn't a bad thing, as it affords space for large finger friendly buttons. Speaking of which, there are up to six buttons, allowing you to:

On that latter point, there is no conversation view, which makes it somewhat of an arduous process to track back through conversations in TwimGo. 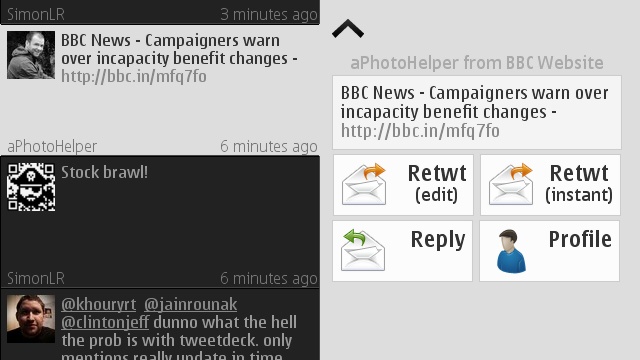 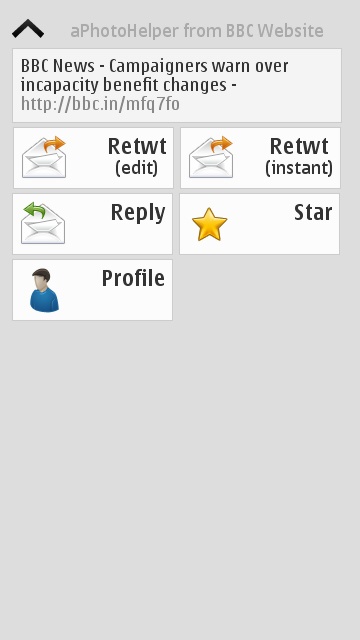 Viewing the tweet menu in portrait, note the extra button

Given that TwimGo takes the single page approach for doing anything with a tweet, it is rather counter-intuitive that hyperlinks are 'clickable' from the main timeline. There were several instances where I inadvertently launched the browser when I didn't want to, while thumbing through my timeline. This sort of application behaviour makes the timeline into something of a hyperlink minefield!

Other Twitter views are all accessible via TwimGo's menu. There is a good range of views, but there are some odd choices too. For instance, you can access the list of people following you, but there isn't a list of who you follow. There is a list of your tweets that have been natively retweeted, which is handy for tracking how popular your tweets are. Then there is a list of retweets to you from those you follow, but they are the edited “RT” style retweets not native retweets, which feels inconsistent. I was glad to see that TwimGo offered your saved searches from the Twitter website, and all of the lists that you keep. 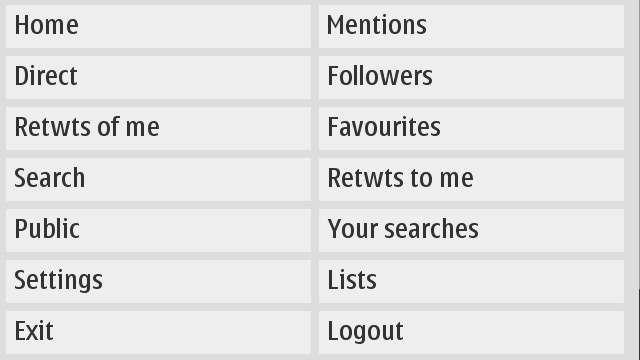 When viewing the profile page of a Twitter user, you get the basics of following (or unfollowing), viewing their tweets, sending a direct message, and creating a public tweet to them. However, there are no options to add or remove them from a list, block them, or report them for spamming. When turning a Twitter profile into landscape orientation, you're greeted with a split screen view, requiring you to scroll through the profile function buttons on one side, and scroll through your timeline on the other (see the sixth screen shot). This is certainly original, but I fail to see why you would want to do both at once.

Overall, TwimGo is a solid Twitter client. On the downside, the UI performance is a little stilted here and there, and there are a few 'fringe case' functions I'd have liked to have seen. However, for the vast majority of people, TwimGo covers all of the bases, and is far more functional for Twitter basics than Nokia Social, which will be the benchmark that anyone with a new Symbian device will compare such alternatives to. [Editor's note: there's no photo uploading/sharing in TwimGo - possibly the one big function that Social - at least in its 1.3 incarnation - still excels at]

Of course, for functionality and performance, Gravity is still the best Twitter client available. However, consider that TwimGo is free in the Ovi Store, while Gravity costs a hefty £8.00.

David Gilson for All About Symbian, 2nd June 2011

Readers may notice that there are two versions of TwimGo in the Ovi Store. The one reviewed here is the WRT based version. A more advanced Qt version (2.8.3) is also available on the Ovi Store. In testing, I was unable to log in with the Qt version, due to constant OAuth errors. However, you can download the Qt version from its Forum Nokia project page, which I have found to log in successfully, except that it does seem to be hitting constant Twitter API errors, while the WRT version did not. This version has a more advanced UI and addresses some of the criticisms made in this review.