Driving games show off the 3D skills of the developer, push a platform to the limit, and are great fun to play (if everything works). Fish Labs have a strong catalogue of 3D titles, and their latest release – Burning Tires 3D – lets them attack the motor sport genre. Have they passed the test, or are they still in the pits? Let’s find out. 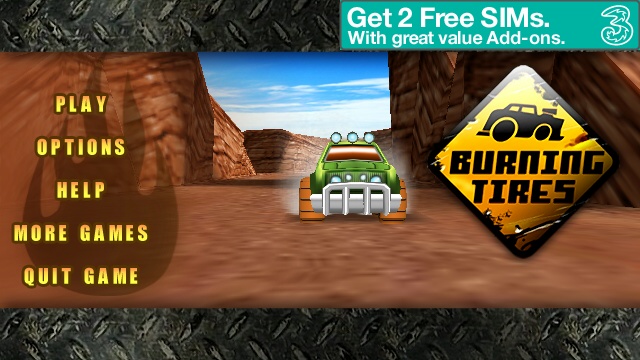 There are two extremes to the racing games of the mobile word. The first is the version that aims to be the pure simulator, with accurate physics, graphical models and lots of details the user can tweak (for example GT Racing), and then through all the shades available up to the arcade style racer (and I’ll hold up Need for Speed HD here). Burning Tires is clearly heading towards the “arcade” end of the axis, while maintaining a touch of reality – there are no power ups, turbo boosts or other novelties on display here.

What do you do have is a well-balanced kart style game, with a number of circuits and cars to unlock from your starting point of one car (the Green Lizard) and one racetrack (based in the desert). You can jump into any of the available cars and tracks through the training mode, which feels very similar to the the timed lap/single race scenario familiar to many racing games, but unlocking the extra tracks is going to require winning the various tournaments on offer. Just as in training, you’ll start with one available tournament, and as you build up your skill you start placing in (and then winning) the races. That unlocks more cars and tracks for practice, and more tournaments to compete in. 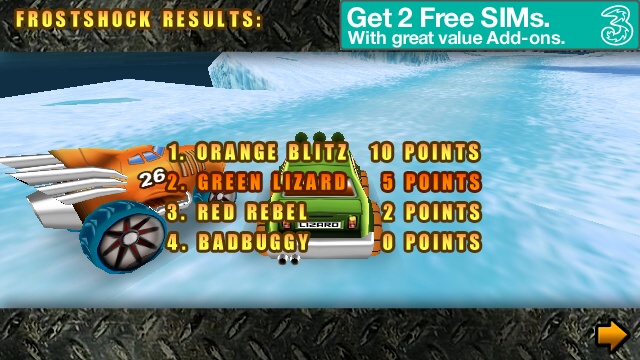 I like that developers Fish Labs have given Burning Tires a good learning curve. Unlike some racing games, your computer controlled AI opponents do not exhibit super speed or the elastic ability to catch up with you if you scream into the lead thanks to some turbo boosting style code. At the same time, neither does your car have any exceptional skills that will allow you to get past your opponents.

You’re going to have to out drive them! And that’s one of the things that I love about this title. You make up time on the track not through gimmicks or Mario Kart style pick-ups, but through smart driving, by maintaining your speed through the turns, and generally driving quickly and smartly. 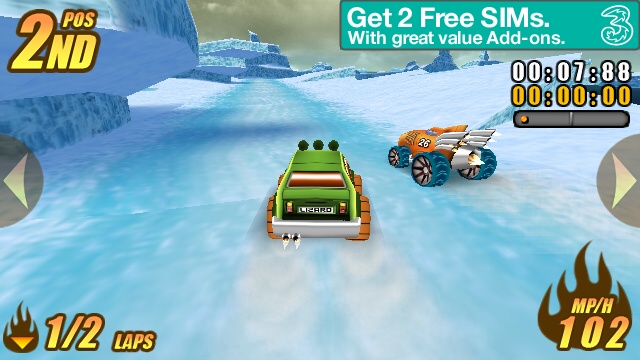 That makes for a game that’s tougher to get into at the start but ultimately is more rewarding as you progress through the game. It also puts pressure on the user interface to deliver a very accurate control system. While that does deliver, it’s not perfect.

My main issue is with acceleration and braking. The game will make the assumption that you are always on the accelerator pedal, unless you press down on the touchscreen outside of a “hot spot”, in which case you’ll slow down, or go into reverse if you are stopped. It’s a nice solution, but it does mean that if you’re looking to balance the accelerator and brake through a turn, and more advanced power on/off techniques for turning, you’re looking at the wrong game. This is the part that pushes it away from being a simulation game.

Steering is where Burning Tires does have accuracy. Defaulting to the accelerometer sensors of Symbian devices, your whole phone acts as the de-facto steering wheel, allowing you to make gentle corrections, shallow turns, or sharp corners. I found the default sensitivity to be a little bit too high, but it’s a simple matter to turn it down before or during the game with a slider control. 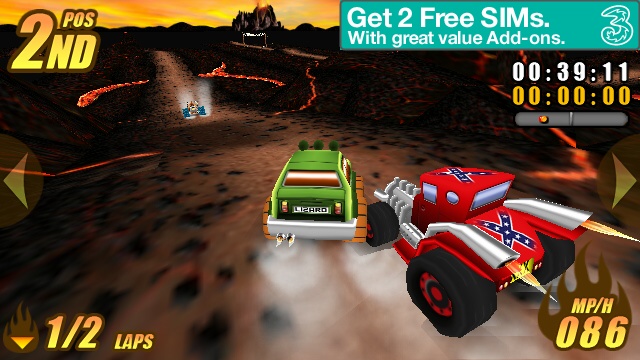 A touchscreen alternative is provided with onscreen left and right buttons appearing at the edge of the landscape screen. These work very well, and if you’re struggling with the tilt based controls, this alternative doesn’t seem to be crippled or limited – the non-linear nature of the steering is mimicked in software well, and handles steering round an opponents car or making a big corner.

I also like that this isn’t a racing game where the car is on rails – you can get turned around and drive up the track the wrong way, you can go into the wall at right angles, you can be pushed off the road... driving cleanly and smartly is the key to victory.

Fish Labs have done a good job on the control system and a good job on the graphics as well. There does seem to be an invisible barrier on the perimeter of the track, so no cutting corners or using the kerbs at the side of the road.  It loses points for that, but gets them all back on track design. There are no fancy loops or banking, just a smart mix of corners of different radii, and the trackside decorations provide for blind corners, distraction and “where does it go next?” 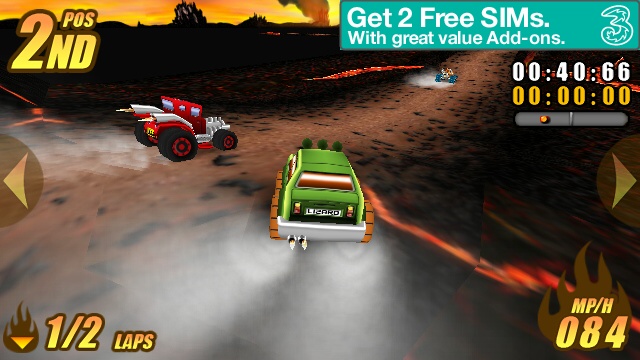 It’s just a shame they couldn’t have more cars on a track at any one time. Including yourself, there’s a total of four cars during a race – which makes it feel more of a grudge match than a full competitive run. I guess something has to give to get everything running as fast and smooth as it does, and three opponents plus the player is almost a standard on high end mobile racing games (such as Gran Turismo on the PSP or Real Racing on iOS).

While Burning Tires is a skillful game, with some great choices made in the physics and UI engine, it is missing a little spark to make it a truly great mobile racing game. Would I recommend it? If you’re a racing nut, then yes – there’s a lot on offer here, but it’s all under the surface. For a casual player looking for something in this genre I’d probably suggest this as a second or third choice.

There’s nothing fundamentally wrong with this, but there’s no… mojo that lifts it up and away from “above average.”