Shazam has been availabl﻿e on Symbian for quite for sometime. Not only has Shazam just be﻿﻿en released for Symbian^3 but it has also been written in Qt, the development framework which Nokia bought the rights to and makes application development quicker and easier to port to the likes of MeeGo. If you haven't heard of Shazam, it is a music recognition application, which solves the problem of trying to identify music you're curious about. Shazam provides additional services and information around identified tracks, including purchasing the track. Read on to find out how well this latest version of Shazam works.

I recently discovered Shazam while setting up an S60 5th Edition phone for a relative. Having recently made the Nokia C7-00 my main phone, I was disappointed I couldn't have Shazam on Symbian^3. That changed today when I saw the Shazam blog announce a new version for the N8-00, C7-00 and C6-01. According to Shazam, an E7 version will be coming in February too.

This version of Shazam has been written in Qt, the development framework adopted by Nokia. Shazam is a great example of Qt on Symbian, there is no discernible difference (to the end user) that this is a Qt application rather than an native C++ application. However, one benefit, and tell-tale sign, to the end user is that the application is a significantly smaller download (than a native application with similar functionality), because most of the software libraries are already present on the phone.

Shazam works by taking a ten second sample of music and creates an audio fingerprint based on the audio data's spectrogram (a 3D representation of frequency and intensity distribution over time). This fingerprint is then sent to Shazam's central network across your phone's data connection. At Shazam's end, the fingerprint is compared with their massive database of pre-computed audio fingerprints. Uploading a fingerprint rather than the full audio sample saves time and battery power on the handset. For those with an interest in signal processing, you can read more about the science behind Shazam in this paper, An Industrial-Strength Audio Search Algorithm (PDF link).

The process of recording and identifying a track is called "tagging" in Shazam, which is a tad confusing when in other contexts that term is reserved for adding keyword meta data to objects. Anyway, with the free version of Shazam you are limited to tagging five tracks per month. To have unlimited tagging, you need to pay a one-off fee of around £2.99 which upgrades you to "Shazam Encore", which gives you Tag Chart, unlimited tagging, Search Music, Recommendations, Track Info and more. Fortunately, installing Shazam from the Ovi Store gives a 30 day free trial of Shazam Encore so all the features can be properly tried. The 30 day trial is the version that has been reviewed here, so the features explained apply to the full paid-for version. 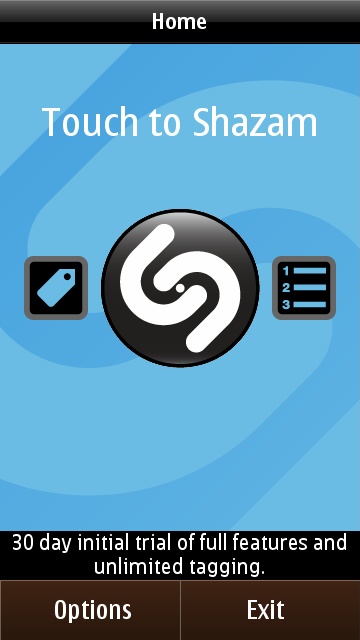 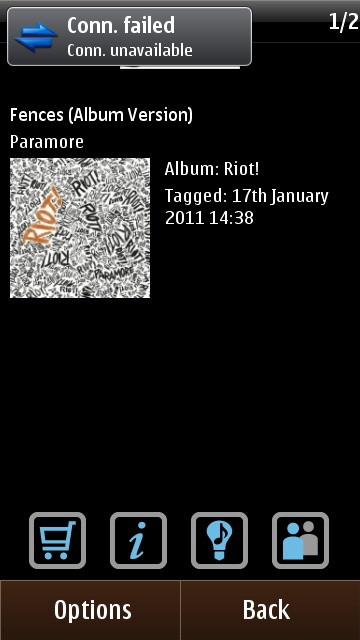 Starting Shazam presents you with three buttons; a list of your previous "tags" (i.e. identified tracks), and the Shazam tag chart, which both flank the large central button to start tagging a track. There is an option in the Shazam settings to identify (ahem, I mean "tag") a track as soon as Shazam is loaded. While recording a sample, an animation plays to indicate progress. Once the fingerprint has been uploaded and checked on Shazam's servers, you will either see an error page if identification failed, or a page showing all of the track's information, the "Tag Details".
The Tag Details page is pretty blank. I would estimate the album art is a 150x150 icon. This is a shame, there's much more space to show something larger. Of interest here, however, are the four buttons at the bottom of the screen, for buy, for further information, for suggesting similar tracks, and finally for sharing tag details. 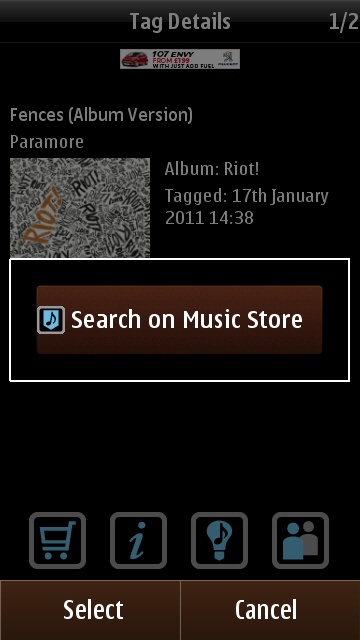 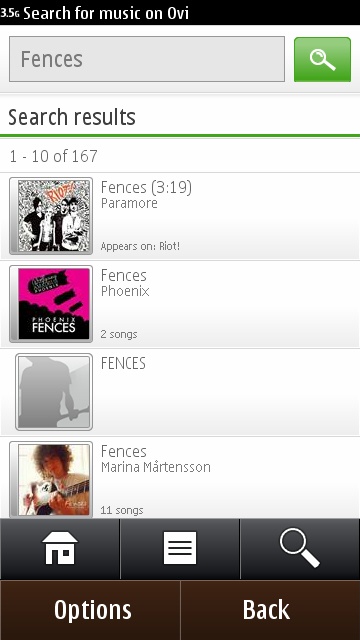 Next to the identification performance, being able to directly buy a track is perhaps the useful feature. Shazam does work with the Ovi Music Store built into Symbian^3, but not without some caveats, which aren't Shazam's fault. Broadly speaking, once you have tagged a track on Shazam, tapping the buy link simply launches the store with a search query for the tagged track. If the user is not logged into Music Store, the search query becomes lost in the process of logging on. The next gripe is that for some reason Ovi Music insists on first launching a web page asking you to select Ovi Music, as if Symbian has more than one music shop! However, once you have jumped through the hoops, the Ovi Music search algorithm is pretty good and will find what you want based on data from Shazam. 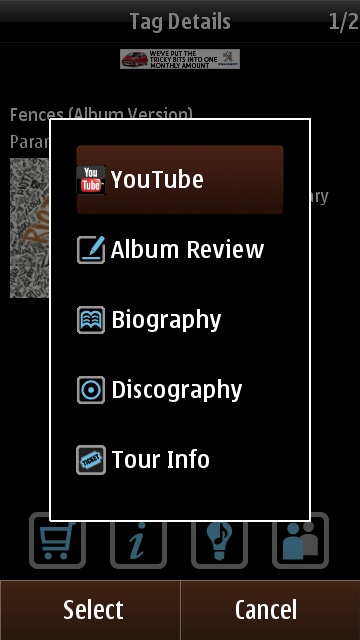 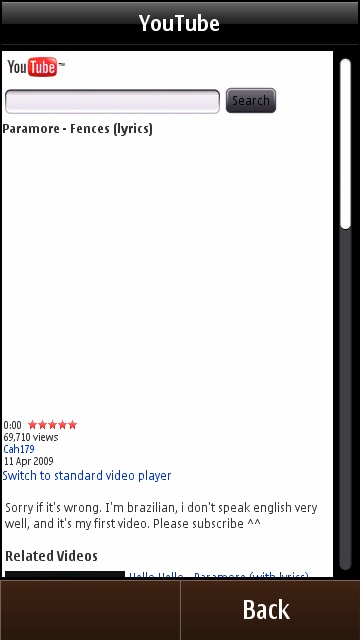 Shazam offers information about and around the track from the second button mentioned above. The information menu offers a YouTube search based on the track, an album review, an artist biography, a discography, and tour information. Apart from the YouTube search, everything is displayed in plain text within the Shazam user interface. The YouTube search pulls results from YouTube's mobile website. Which would be fine, but video playback doesn't work. Neither using the embedded Flash player or switching to streaming videos in the Symbian video player. One for Shazam to fix in the next version. The tour information tries to let you know if there are any tour dates within a user definable radius. However, it wasn't clear to me that Shazam knew where I was, and when I tried setting my location, there was no positive feedback that it had processed what I had typed in.

The recommendations page is a simple top five tracks, similar to the track you've just tagged. Tapping on any of them takes you to the Tag Details page for that track with the same four buttons mentioned above. 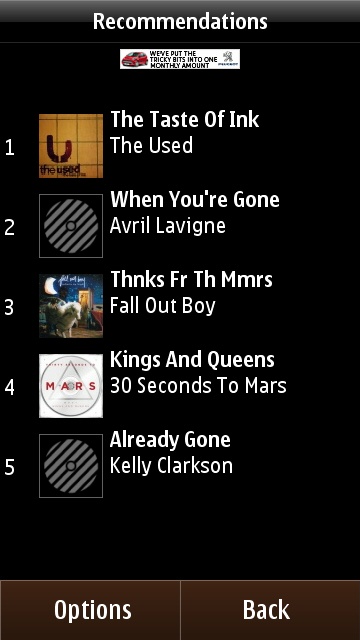 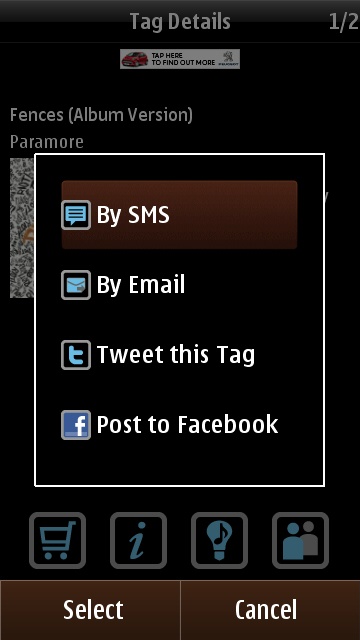 When it comes to sharing tracks, the options are thankfully straightforward. There are options for sending tag details via SMS or Email. There are also options to share via Twitter and Facebook. These two options require you to authenticate via an embedded web page from the respective websites. In testing for this review, everything worked smoothly.

When it comes to identification performance, I have not yet found a track that Shazam could not identify. Shazam is supposed to be able to work very well with lots of background noise, although in the course of this review the nearest to this I was able to test was successfully identifying the background music to a fight scene in an action film (Mortal Kombat if you must know). I also experimented by holding one of my earphones to the microphone on the C7-00, and Shazam still identified music coming through the tiny earpiece, but only above 50% volume.

The user interface could do with a little polish adding to it, but it's perfectly functional as it is. Also, I'd have liked to have seen a home screen widget for being able to tag music without going into the application first.

I'd recommend everyone to have Shazam installed on their phone. It's one of those applications you may rarely use, but it's a fantastic tool to have on hand for the (probably infrequent) times you need it. In the grand scheme of things, the one off fee for Shazam is trivial. However, even if you don't wish to pay, 5 identifications a month is probably enough for those one-off in-a-pinch moments.

David Gilson for All About Symbian, 17th January 2011.