It looks like the Nokia N8 and C7 are turning into petrol heads. Not happy with having the Top Gear Christmas specials downloaded via iPlayer (or from the dark corners of the internet) it’s now time for me to look at another racing game for the Symbian^3 platform. It's the turn of.... Asphalt 5... [Jeremy Clarkson voice ON] HD!

Asphalt 5 HD is naturally the next in a long franchise that stretches back many years (in fact, the first Asphalt game made an appearance on the original N-Gage system, and a nice ride it was for 2004). It’s been spruced up, reworked, artwork updated, control systems tweaked to make it ready for 2011.

Unfortunately, it comes up a little bit short.

The problem with Asphalt is that it is a 'nearly' game, and the main issue I have is subtle, but affects the whole title. The frame rate in the game, while driving, feels a little bit less than the 25 frames per second that would provide the illusion of smooth moment. It’s only a tiny bit less, so the game is still playable, but while it doesn’t look jerky it feels a little bit… wrong.

It proved impossible to do an in-race screenshot, so see this video instead:

You have three choices of control, the first being the use of the accelerometer to turn the car – just as we’ve seen in other racing games, with the touchscreen having a brake pedal at the bottom. You can also use the touchscreen exclusively, either by touching on the left or right hand side of the screen to turn the car, or by turning an on-screen steering wheel. To be honest, go with the accelerometer controls, the other are just not accurate enough (digital steering on the screen) or too gimmicky (the steering wheel).

The only other button you need is the “boost” button for a little bit of increased engine power. This fills up as you drive along so you’ll be using it a lot. So a perfunctory set of controls, nothing that you wouldn’t expect. This is good, it means you can get on with the serious part of the game and do some driving.

There are a number of different types of races, as well as the straight 'who can stay in the lead' you have 'head to head' races, 'evade cop cars' (and 'be the cop car'), time trials to set the fastest lap on a clear track, and the 'eliminator'  which is a last man standing demolition derby affair. 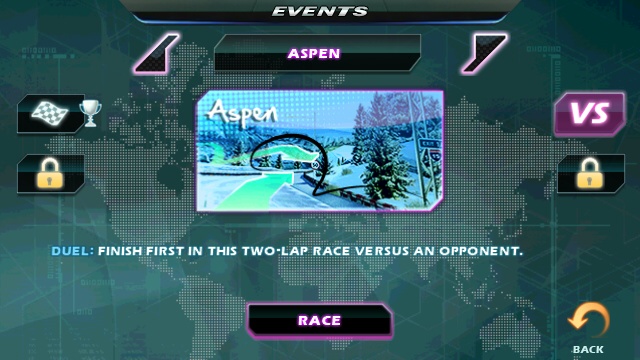 After any race, you’ll win cash not just for placing, but for special awards such as a near-miss, long jumps, demolition of property at the side of the road or knocking out other cars. This cash is the currency that drives the game, because this is what allows you to buy new additions to your car, such as more boost capacity, better suspension and improved handling. Oh and new cars.

You start the game with a nice looking but rather sluggish Nissan, or a sharp turning but relatively slow BMW Mini, and while that might get you through the first few races, but you’ll need a far better car with all the trimmings as you progress through the different race events and new circuits (which are unlocked as you win through each event).

I have to say though, there’s very little feeling of being in different cars when you upgrade – the only real difference is the lap time and overtaking other cars, but with no feel on the road for being better it does, again, feel slightly out of balance. 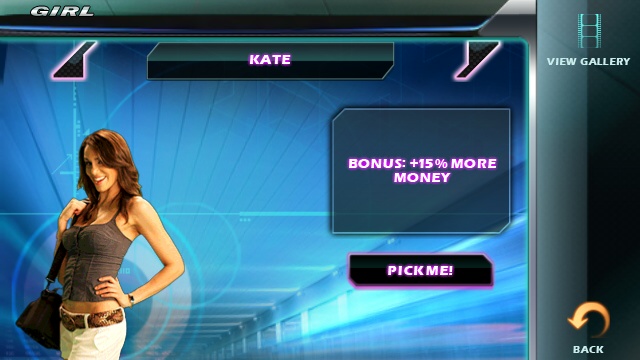 Speaking of out of balance, isn’t it a bit sexist that one “modifier” you can earn is a “girl” who’ll drape herself over your car as you get 14% more money with her? Apart from the fact that it’s incredibly cheesy, I’m sure there are some women out there with smartphones who’d rather have a man on the car (and some men as well).

Asphalt 5 HD is squarely in the “arcade" category of driving games, but not the “accurate” ones. There’s no urge to take racing lines or drive correctly, this is a mash the accelerator and 'turn when the road turns' game. Add in the incentives of picking up the extra cash and power ups on the road, long jumps off ramps to gain points, and sudden slow mo shots to emphasise movement and it’s a hyper-kinetic assault of reactions, coupled with a slow frame rate. 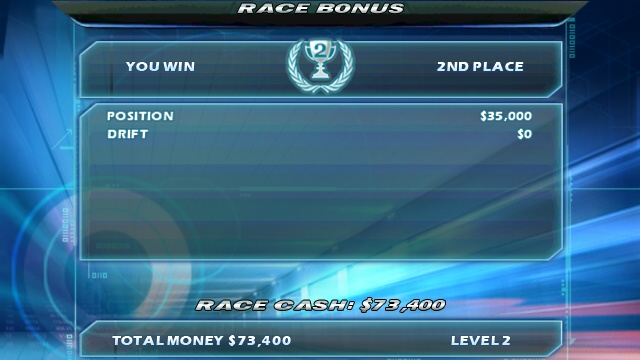 While there is an appeal to Asphalt 5 HD, I think you’d need to feel that you’re a completist to want to get through this game – and if you’re that sort of person then you’re going to be downloading all the new HD games in any case.

If you’re only going to grab one driving game, then I’d point you towards Need for Speed: Shift. If you’re looking out for something else, then by all means consider Asphalt 5, but be aware it’s more hot hatch than supercar.