Who wants the short review? Okay here it is. This is just Golden Axe for your mobile phone. If that’s enough to make you go “oooh!!” then you don’t need to read any more, just head straight to the Ovi Store, download Hero of Sparta, and away you go. For everyone else, you might need a bit more convincing, so here’s the review. 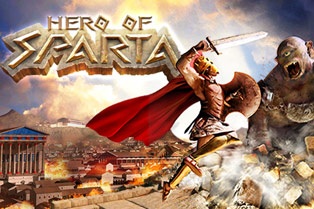 First up, it would be fair to point out that this is not a game that will have as much appeal as Need for Speed: Shift (reviewed yesterday). The Hack ‘n’ Slash genre can be divisive; it’s easy to point out the relative lack of complexity with just direction controls, attack and defend buttons, and the occasional magic/power move that can be utilised.

At the same time, there is a subtlety to playing a game like Hero of Sparta, where you can build up a rhythm of attacking and retreating, using your health as a resource to be spent on certain attacks, preserving it at other times. There are times you can go in waving the sword hard, while other times you need to defend heavily and just poke the enemies once in a while to wear them down.

So don’t knock down Hero of Sparta HD in the first few minutes of play. Give it time and you’ll find a delicate game that needs a clear head, short term tactical thinking and a precise approach to moving and attacking.

Which is where Hero of Sparta is let down very slightly.

Given the reliance on touch screens in the new Symbian handsets (you know, the ones with the graphics chips that are needed to make Hero of Sparta run smoothly), there aren’t any traditional gaming controls. You’re provided a ‘virtual’ joystick on the left of the landscape orientated screen, and the attack/defend buttons on the screen on the right. 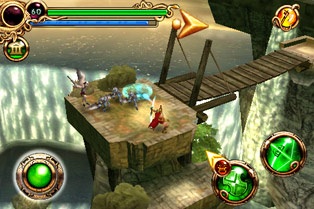 Yes, it works, and I don’t have any complaints in the speed of the game working out what you’ve pressed, but as an arcade player I miss the haptic feedback you get from a real button (or even a stubby joystick with a sphere on the top to hold onto – but that’s old school by a few generations). If I look at the virtual stick, I can see what direction I’ve moved it away from the centre, but there’s nothing for my brain to grab onto and know instinctively.

It’s a problem that every modern touch-based smartphone platform has, and one that game developers are trying to find solutions for – virtual sticks, accelerometer controls, little rumblings of the phone’s vibration motor… there’s still no substitute for a microswitch and a sprung piece of plastic for killing. I’d be interested to see if the keyboard is made a control option when the E7 arrives.

Get over this issue, and the Hack ‘n’ Slash fans wont take long to do so, and you’ll find a  pretty solid game. As with most games, there’s little subtlety in the map – even though you have an almost 3d look to the game, you are following a linear path (with the occasional dead end to follow that might have some treasure at the end). Depending on who’s attacking you, the zoom is automatically set so you can take in the majority of the action and plan accordingly. 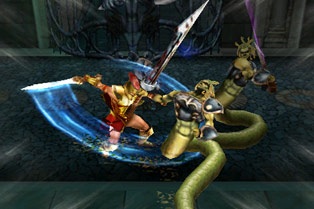 The textures aren’t quite perfect, there is still a feel of hand drawn computer graphics as opposed to photorealistic terrain and buildings, and when compared to the current crop of 3D Shooters, Hero of Sparta looks a generation behind them. But to balance that out there’s very little frame rate drop or lag. Actually I only spotted one occurrence– when you pass a checkpoint and your status is auto-saved, so you can return there if you die or start the game again.

There’s a nice spread of enemies to fight as well. You’ll open up with the grunt soldiers that emerge from the ground in a manner that would make Ray Harryhausen proud (look him up, kids) with the occasional larger troll making an appearance. As you explore the Island you are marooned on, you’ll find more creatures, from the awkward scorpions to bigger and scarier mythological creatures that will stretch your fighting abiity. 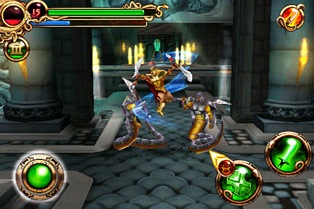 Oh, and that marooning, and the discoveries you make, are all told through cut-scene animation that uses the same graphical engine as in the game, and shows it off to good effect. Don’t expect too much from the plot though, this is 1950’s swords and sandals levels of storytelling  but it’s enough to hold the game together.

And very well too. Hero of Sparta is what I’d call a strong B-title in the new Symbian gaming world. It doesn’t sell the platform, it doesn’t immediately attract the eyes of the press or the consumers – but when you buy it, you find a great game, with depth and skill, in a genre that’s sorely under-represented in the mobile space.

Just one recommendation – change the font used in the game, there are a handful of letters that are nothing more than hieroglyphics and it spoils the flow when I have to play “guess the word….”