If you've been following my continuing review of the Sony Ericsson Vivaz, you'll know that it has a small but perfectly formed body and a great camera/camcorder, plus a glitzy new homescreen and media suite. But how does it stack up as an overall smartphone, in comparison to devices like the Nokia X6? What about application load-out and compatibility? Here's the final part of my Vivaz review. 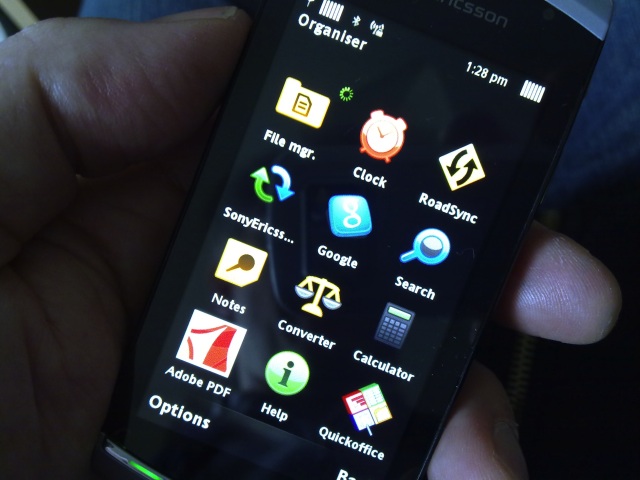 I've already looked at the add-on homescreen and media suite, both of which do things all their own way, both in terms of interface and cosmetics. But what of the rest of the Vivaz's application set? Much of this will surely be very familiar to anyone well versed in the ways of Symbian?

The biggest lurch is the way application icons have been scattered, almost at random, in the different application folders. When you dig deeper, you realise that the distribution of icons has been forced on Sony Ericsson by the absence of (N97 v20-style) kinetic scrolling across the interface. Not only are the static screens and fiddly scrollbars an utter nuisance across almost all applications, but the lack of scrolling in the application folders means that, rather than confuse the user still further, Sony Ericsson has chosen (rather crudely) to simply default all folders to 12 icons, so that, out of the box, there isn't any apparent need to scroll.

The awkward reshuffling has meant, for example, that RoadSync, Quickoffice (viewers) and Adobe PDF are all now located within 'Organiser', while the media apps 'Radio', 'TrackID' and 'Sound recorder' are all forced into 'Applications' rather than being covered within the 'Media' suite/area mentioned above. Thankfully, you can (as is usual with S60) move applications around from folder to folder if any of these assignments really offend you.

Pressing the central S60 menu key reveals the familiar icon system, even if Sony Ericsson has jiggled everything round a little. Here are the main differences from a typical Nokia S60 5th Edition phone: 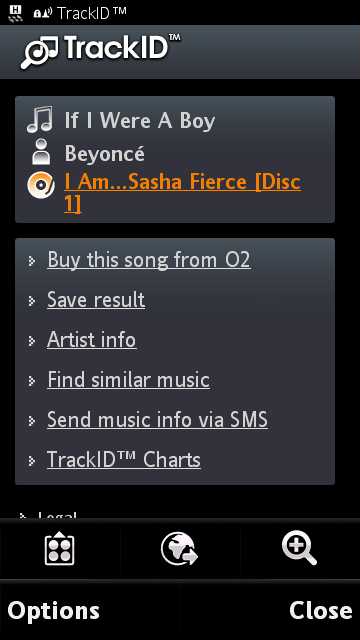 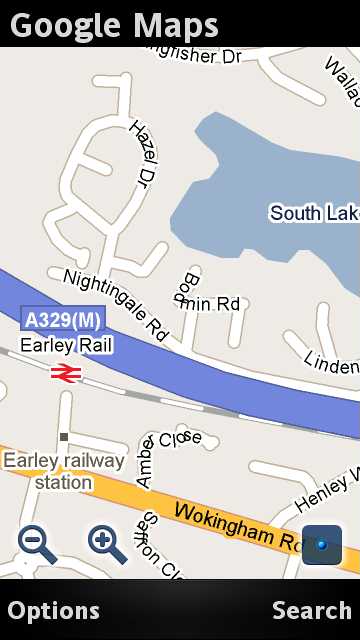 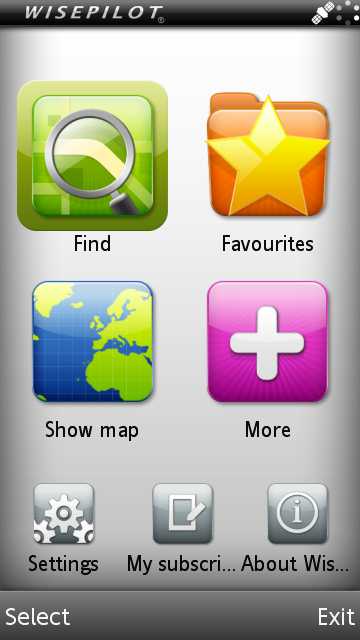 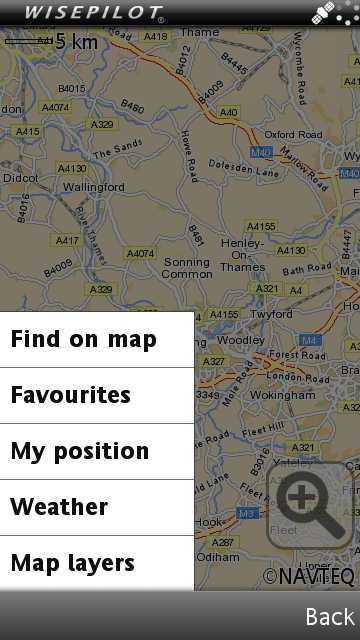 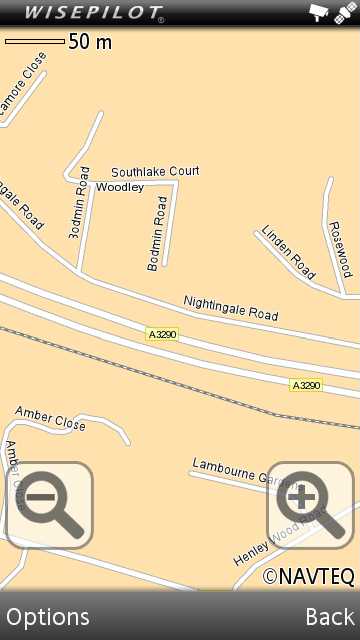 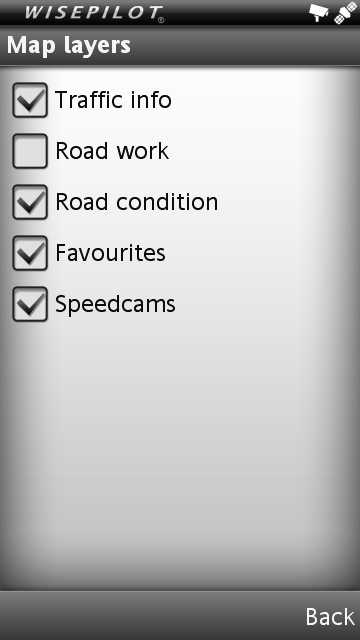 Zoomed right in, the limited Java graphics are evident; functionality is all there though... 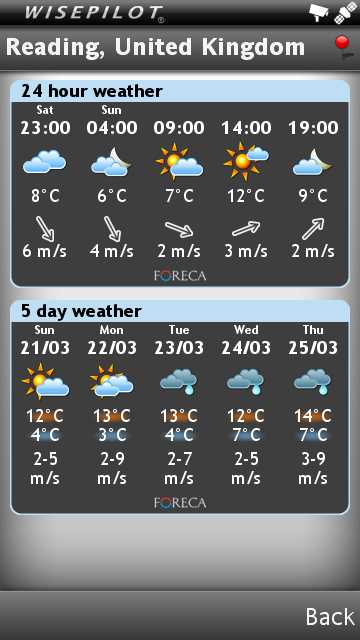 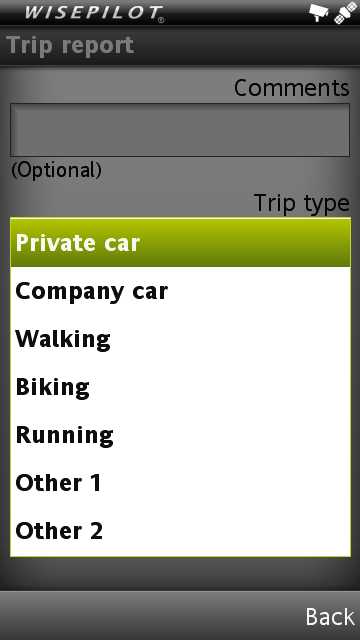 Like Ovi Maps, there are extras, here showing Weather and the Trip Report summary 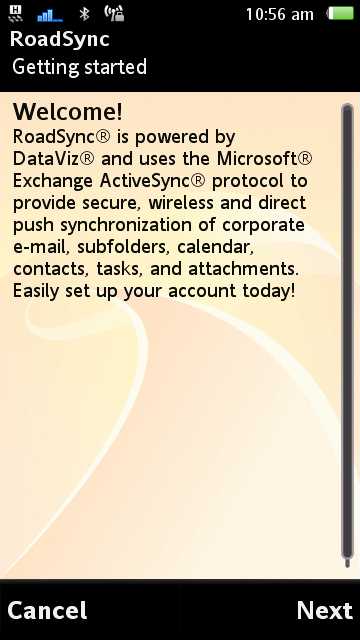 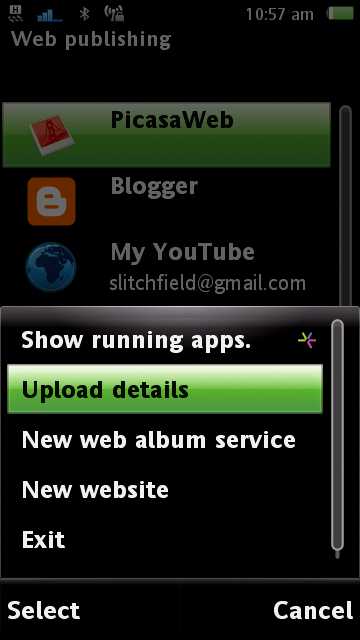 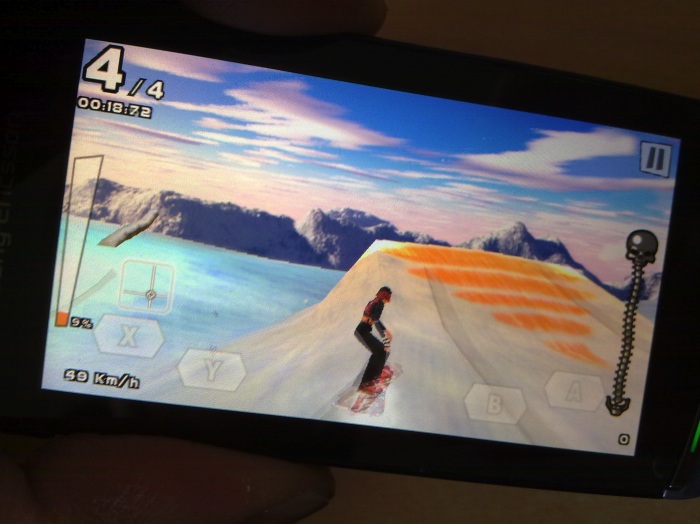 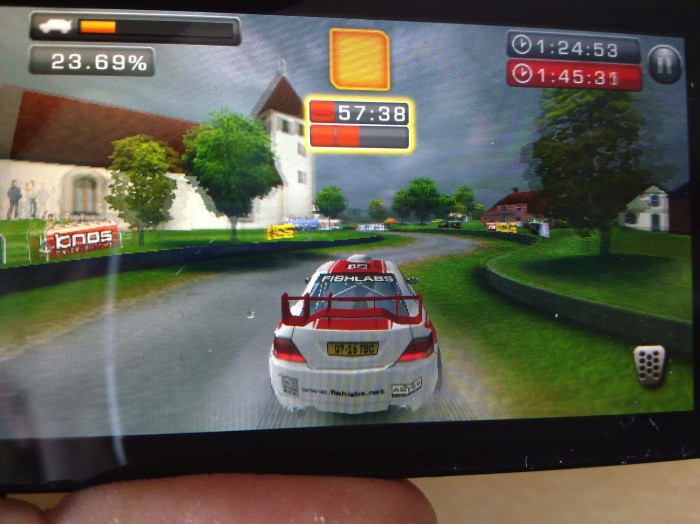 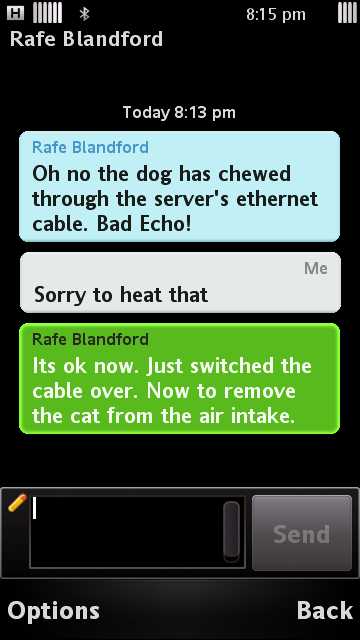 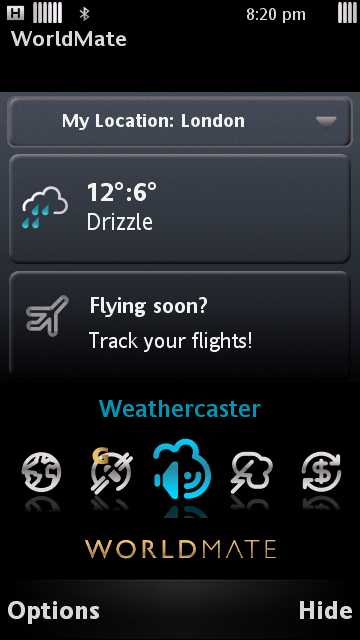 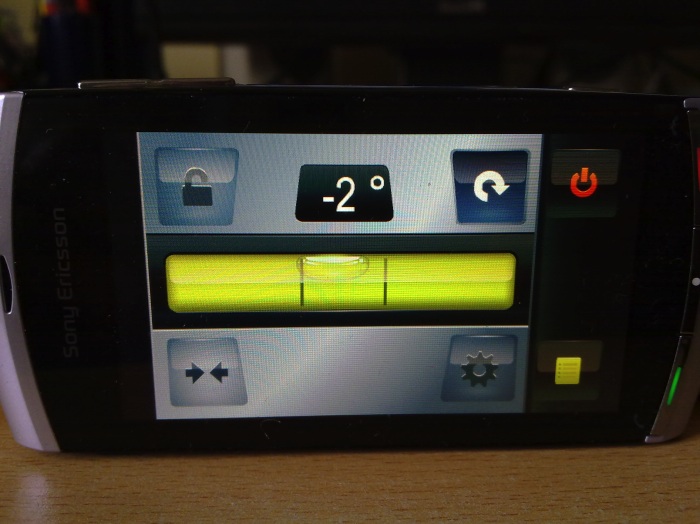 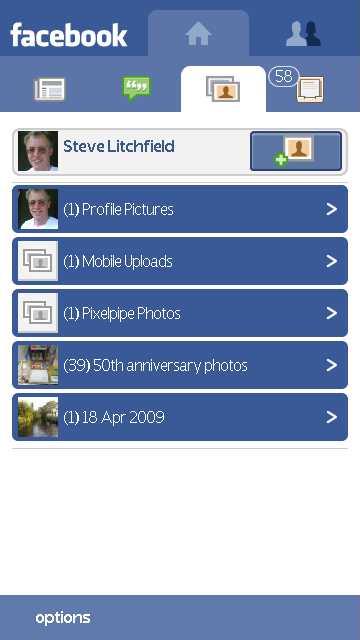 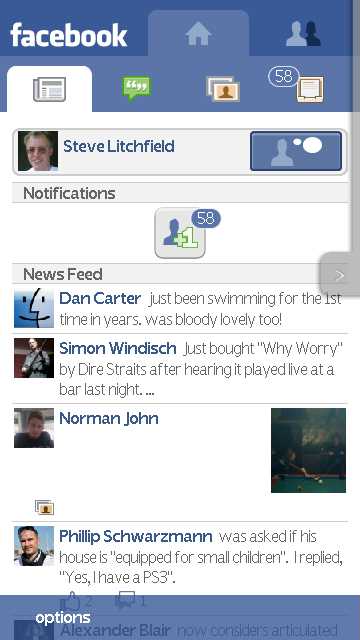 On the negative side, the following applications, familiar from Nokia S60 phones, are missing from the Sony Ericsson Vivaz:

(In case you're wondering why there are lots of photos of screens in this review, it's because something really weird and non-standard in the Satio's graphics system interferes with our tool of choice, Best Screensnap, most of the time. Ah well....)

Other S60 applications not mentioned are largely unchanged from the baseline S60 5th Edition specification, aside from cosmetic differences here and there. In particular, Web has been renamed 'Internet' and is the same slightly clunky klunky build as featured in the Nokia 5800 with its original firmware. No kinetic scrolling, no automatic full-screen, no next-gen Webkit engine, relatively slow page rendering, and so on. And of course this module is also used as the engine to power the PlayNow system, used throughout the Vivaz, impacting its performance as well... It's all rather underwhelming on a 2010-spec phone and here's hoping Sony Ericsson can update the version of Web in firmware.

On balance, though, the application bundle is comparable with that on most Nokia S60 5th Edition phones, though one or more of the differences noted above may put some hardened Nokia fans off and it's fairly obvious that the app mix is less balanced than on the likes of the Nokia 5800 or Nokia N97 mini. But, as with Samsung on the i8910 HD, it's not too difficult to replace most of the bits you might expect on a Nokia and, glitches aside, there are a few extras which may positively put a smile on your face (Water Level, Rally Master Pro). 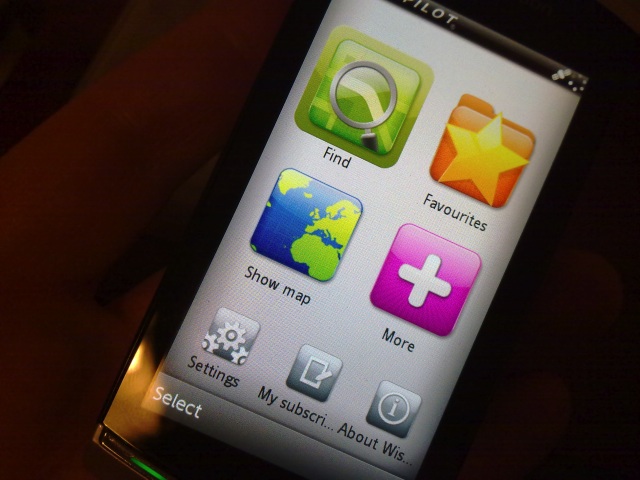 What comes across in the Vivaz is that it's definitely a second generation S60 product from Sony Ericsson (after years of UIQ experience) - there are far fewer bugs and glitches in the firmware, the hardware feels far more refined and the software load-out has less holes. However, it's often the third generation of any tech product which really gets it right (Microsoft Windows being the classic example, though S60 3rd Edition and the iPhone 3GS also spring to mind) and what's needed here is something with the hardware specs and ambitions of the Vivaz but with Symbian^3, a capacitive, transflective touchscreen (iPhone-style) and a proper camera flash system (heck, make it Xenon and I'd be even happier).

I'm sure that, even as you're reading this, Sony Ericsson are beavering away in secret on something close to my wishlist. Not the Vivaz Pro (which in some ways is cut down from the Vivaz) but a true successor in the Satio-Vivaz lineage, a device that can really make the most of the powerful internal hardware.

As for the Vivaz, be ruled by my table above. Buy it for the unique camcorder functions or because of the size and weight, but make sure you've consciously dismissed all the negatives beforehand. 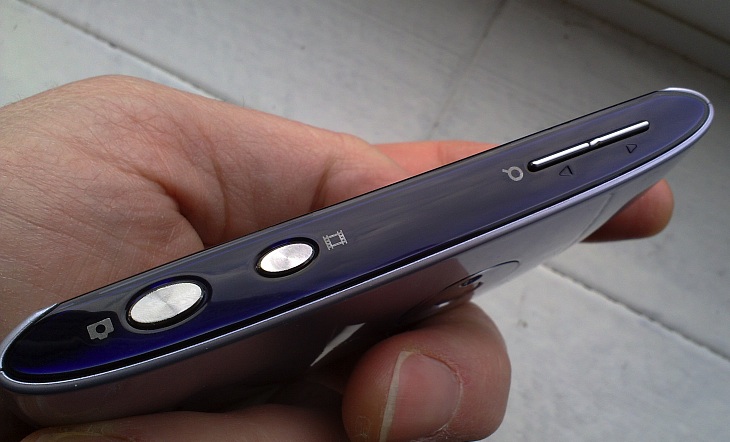