Good news for Twitter fans – a new Symbian client has arrived, and it goes by the name of Neatly. With Twitter clients being so plentiful, it's crucial that new entrants to the market have some unique feature to separate them from the rest. With that in mind, Neatly is appropriately named, as its selling point is that it attempts to automatically organise your tweets for you. Read on to see how well it works in practice! 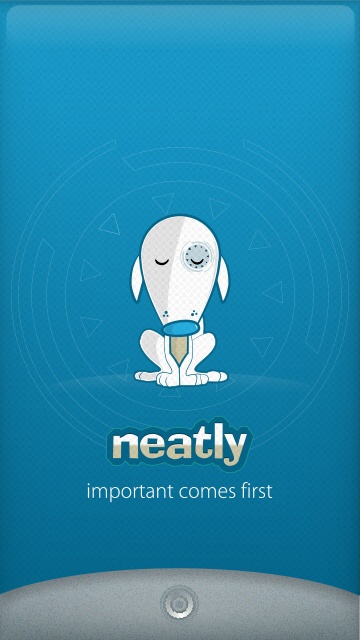 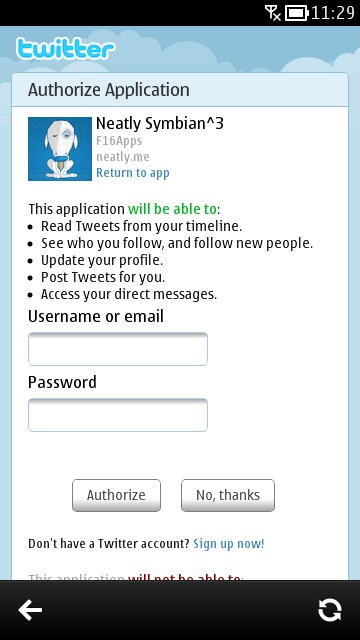 Besides its unique features, Neatly is a fully featured Twitter client. The main menu is comprised of a three by four grid of icons – the functions on offer will be familiar to seasoned Twitter users. The feature set even supports multiple accounts. Twitter lists are supported too, but only the lists that you have created, not lists that are following you. 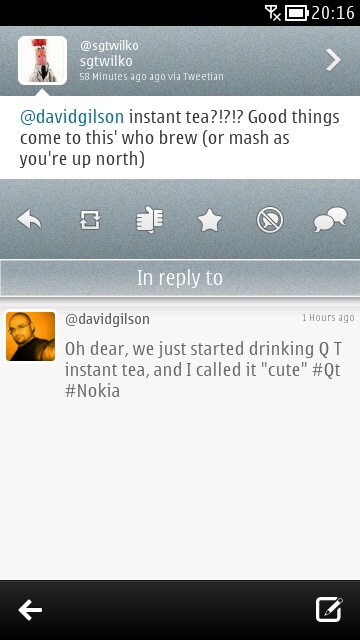 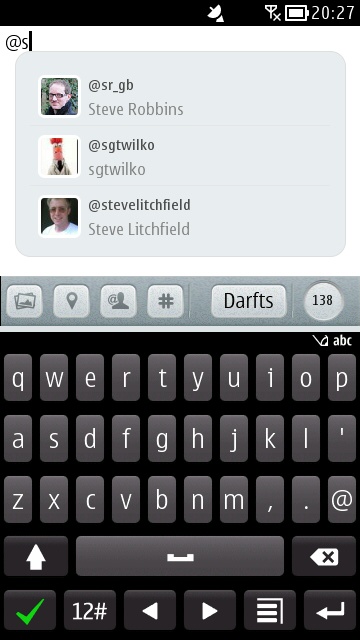 The 'Mentions' view displays retweets of your tweets in addition to mentions of you – this is almost as good as the Twitter website which, further to those items, now shows new followers. Fortunately, the Neatly developers opted to partition the direct message list by user, rather than just a continuous stream of messages from multiple users. 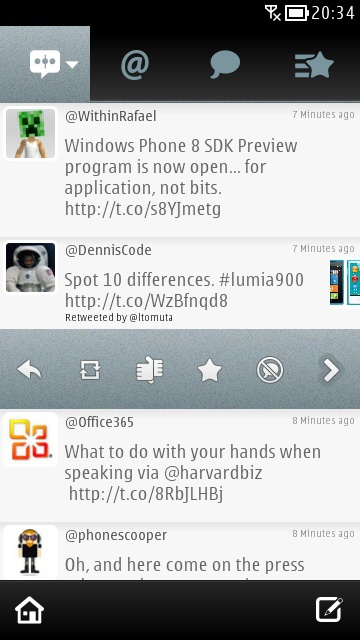 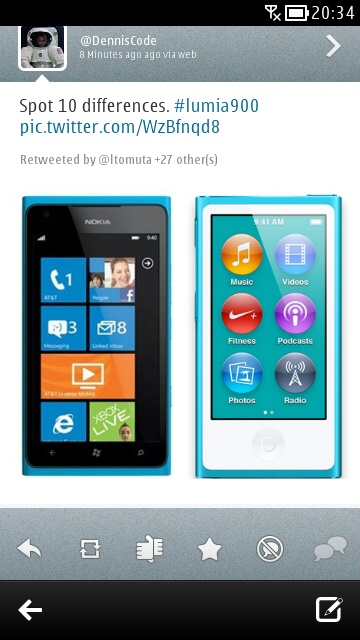 Interacting with any particular tweet stream will be familiar to anyone who has used the official Twitter client (on other platforms of course); for example, refreshing a stream is achieved by the 'pull down and release' gesture. Tapping on a tweet brings up a horizontal list of icons for each of available action. The ">" symbol at the end of the row takes you through to a dedicated page for that tweet. Neatly also supports image previews both in-stream and on single-Tweet pages. All good stuff. 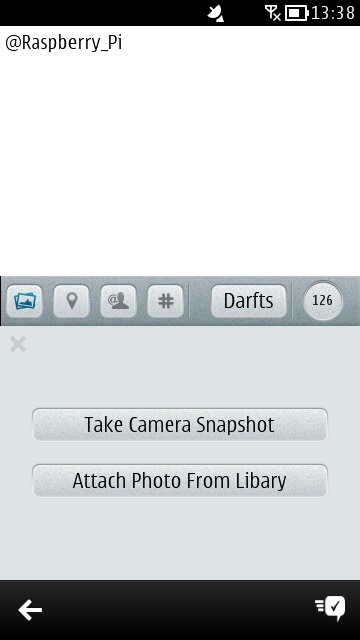 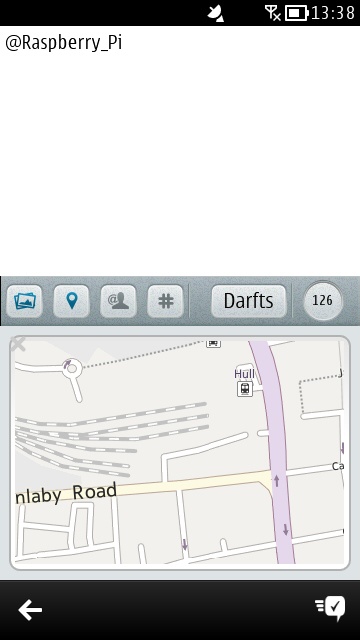 The tweet composer is furnished with plenty of assistive functions. There is a handy auto-complete feature for mentioning users. Image uploads are supported, either from locally stored images or from a built-in camera interface. Images are uploaded to Twitter's own image hosting service, pic.twitter.com. Neatly also provides a selectable list of all the Hashtags it has come across during its time with you, allowing you to quickly tag your tweets.

The layout of the composing screen is interesting – it's split in half by the icon bar. The lower half will be obscured by the keyboard, allowing you to read your tweet in the upper half of the screen. However, when you dismiss the keyboard, the lower half displays items you've attached to the tweet, such as images (e.g. above), or a mapping view for geotagging tweets.

Neatly also supports conversation views – with auto-loading of chats being an option on the settings screen. This feature works well and saves you continually tapping through "in reply to" links.

That covers the basics, but what about Neatly's special features, as teased at the top of the review? Besides the 'Regular' timeline, there are options to view Smart, Custom, and Topics-based timelines. It's at this point where I had trouble as Neatly's Smart timeline seems to be rarely updated, and it's not at all clear to me what its criteria is – in short it felt as though it wasn't working. If I missed the point of the Smart timeline, then I feel it was too obtuse to understand fully, and I wish the developers had incorporated an instructional page to explain what to expect. Neatly's website only says "Coming soon", so there's no help there either. 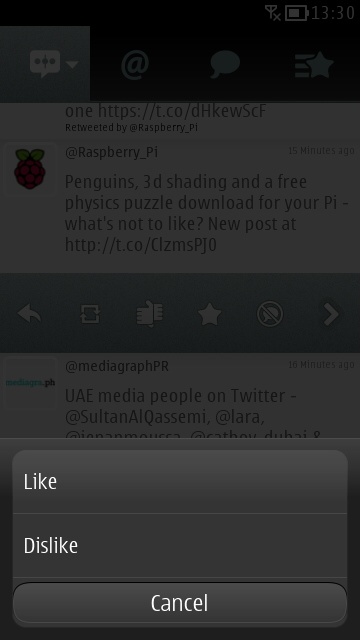 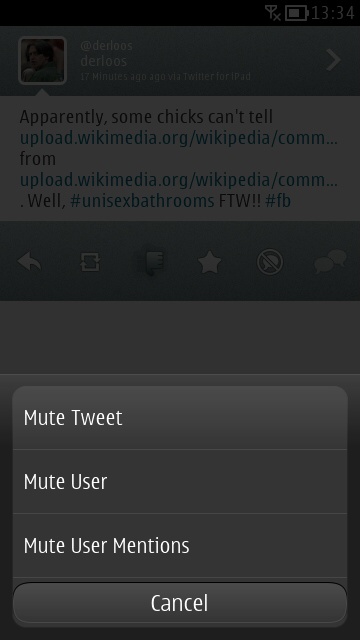 Neatly needs to learn your preferences, and it does this as you use the 'Like/Dislike' icon which is found on the icon bar for individual tweets, described above. This training makes the 'Topics' timeline into a more accurate filter of your regular timeline, showing you the tweets you're most likely to be interested in. There's a custom view too where you can set topics of interest and what type of attachments you're interested in; i.e. just tweets, pictures, or map locations.

As to whether you should buy Neatly, let's consider the competition. The nearest Symbian alternatives (besides Nokia Social) are Tweeties which now costs £4.00 and Tweetian which is free. As far as user interface goes, Neatly is on a par with Tweeties, which means Neatly pips it to the post due to its £3.00 price tag. Meanwhile, Tweetian is extremely good quality for a free application, and unless you're attracted to the screenshots shown here or are interested in the training features of Neatly, then Tweetian will fulfil your needs.

Overall, Neatly puts on a good show and I'm interested to see how it develops. You can get Neatly in the Nokia Store for £3.00 or grab the free trial.