Symbian already has a wealth of options for accessing Twitter, but there’s no official application. This means the time you spent learning the layout of a Symbian-only application will be lost if you move to another platform. Fear no more because Tweeties is here in free and paid versions – it’s the latest Twitter client for Symbian and it follows Twitter’s design language to a T. Read on to find out how well the Twitter design language translates to Symbian.

In the last AAS Insight podcast we discussed the availability of mainstream applications. While Symbian has applications for most services, many are made by third parties, which leads to unfamiliar surroundings to anyone coming to Symbian from another platform, and vice versa. 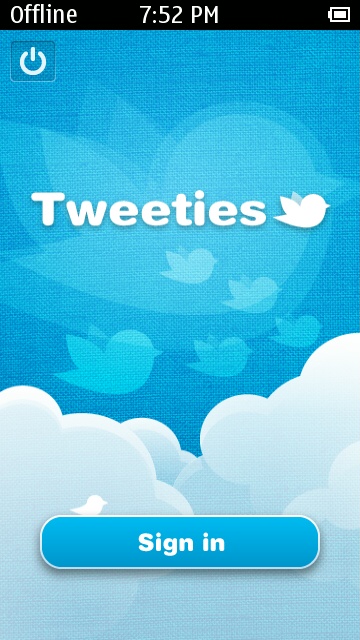 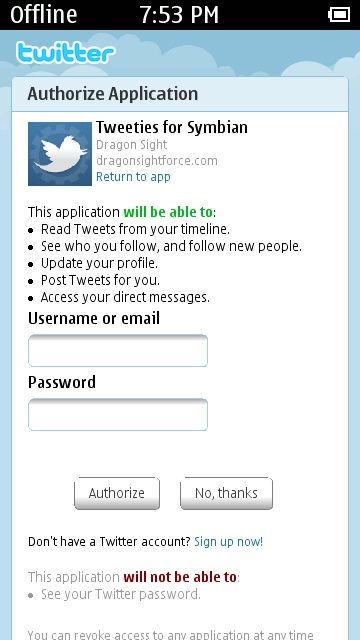 Tweeties seeks to address this issue (for Twitter) by closely following the design of the official Twitter application for Android and iOS. However, this goes against the new design rules of Nokia Belle. So, while it brings Symbian in line with other platforms, it breaks the Belle look and feel.

Anyone who has used the official Twitter client on another platform will be at home in Tweeties. Reloading the timeline is achieved by pulling downward, and tweet options (e.g. reply, etc) are revealed by swiping to the left or right. There is a toolbar across the bottom of the screen to access your timeline, replies, direct messages, and search – there is also a triple dot icon for other functions. Whenever an update is available on your timeline, replies, or direct messages, a blue glow appears above the respective icons, prompting you to refresh that screen – this is another design idea borrowed from the official Twitter client. 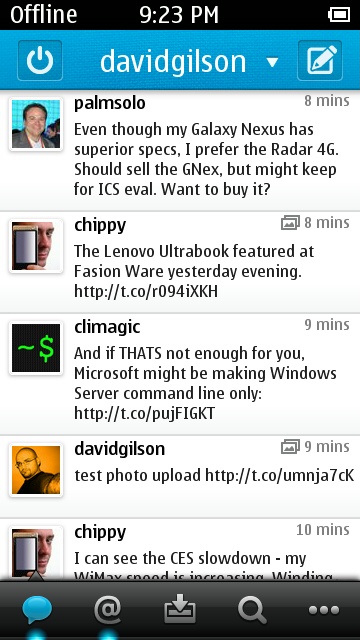 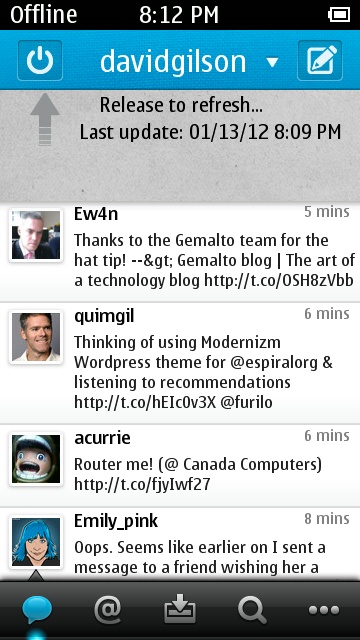 Notifications and refreshing the timeline.

The direct messages page gives you a list of your current conversations, and tapping through gives you a conversation view. While testing, I found no way to manually update my direct messages. The test message I was trying to receive took approximately 30 minutes to arrive – the same message arrived instantly via SMS, TweetDeck, and Twitter’s website. Unfortunately, Tweeties does not have any settings for alerts or to change update frequencies. 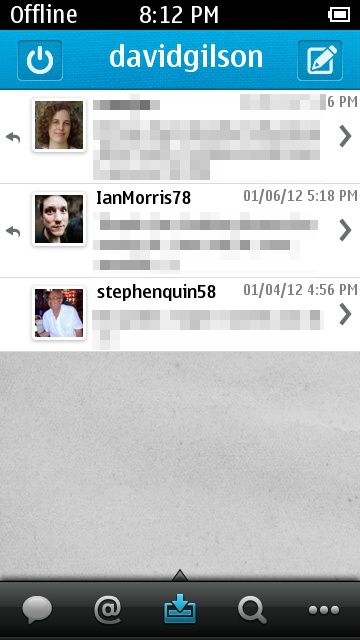 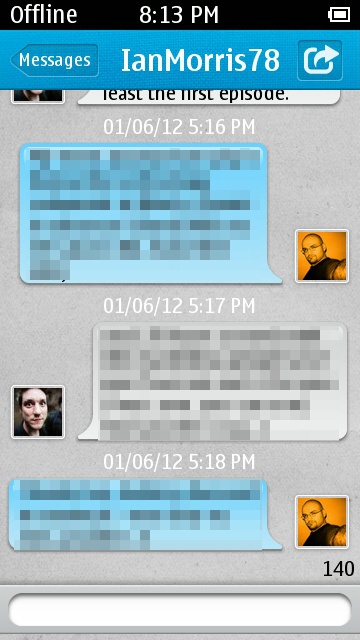 The search page in Tweeties is nice and simple – just a search box, complemented by the currently trending topics. I’d have much preferred to see a list of my saved searches instead of trending tripe topics.

Tweeties allows you to browse your favourite tweets, even though they are buried away. There are two routes to find them, though - either via your profile page or by tapping the triple dot icon at the end of your toolbar. 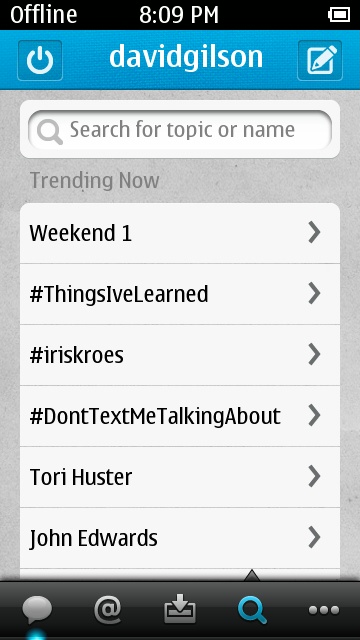 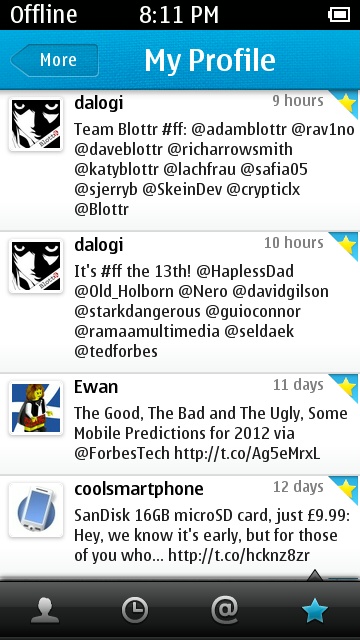 As mentioned above, you can access the options for an individual tweet by swiping it to the side. However, tapping on a tweet takes you to a dedicated page which contains all the basic options: reply, retweet, favourite, and delete (if it’s one of yours). When retweeting, you can use the official retweet method or just quote the original text. When reading replies,  a “in reply to” link is not included and there is no way to view an @reply conversation, which is a shame. Additional options include opening URLs in the default browser and sending a copy of the tweet as an email. 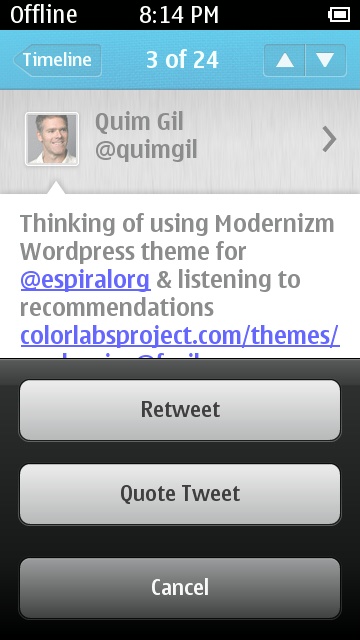 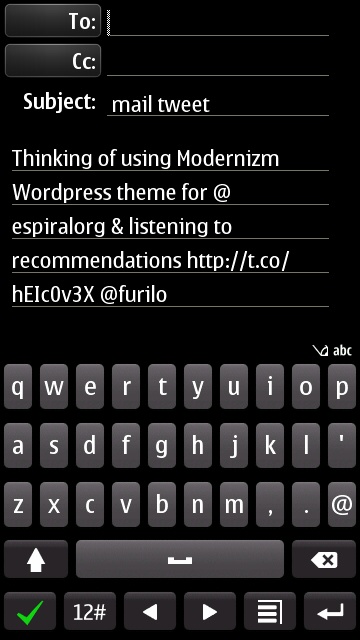 The single tweet page also shows a link to the author’s profile at the top of the screen. Viewing a profile page shows all the same information as the Twitter website, and links you through to the user’s followers, following, tweets, and favourites lists. You are also shown whether the account is following you, along with a button to follow or unfollow. The bottom of the page has buttons that expand with links to the user’s Twitter lists and their retweets (of them, and by them). 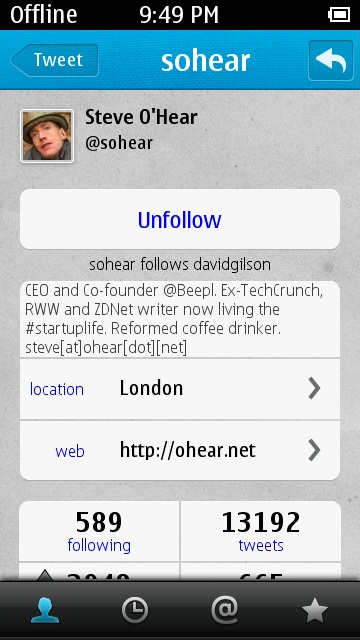 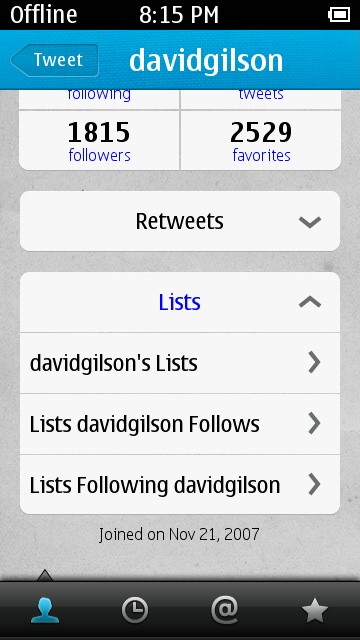 The upper toolbar of Tweeties shows an ever-present button for writing tweets, which offers a comprehensive set of tools for creating content. There is a custom portrait QWERTY keyboard (there’s no landscape mode - isn't this taking emulating Twitter on other mobile platforms a little too far? - Ed) which is fine, but it does not have text correction. Fortunately, there is an “Edit” button with which you can launch the standard keyboard and editor. This seems a rather complicated way of entering text, since Symbian Anna supports split-screen keyboards natively, which Tweeties should be taking advantage of. 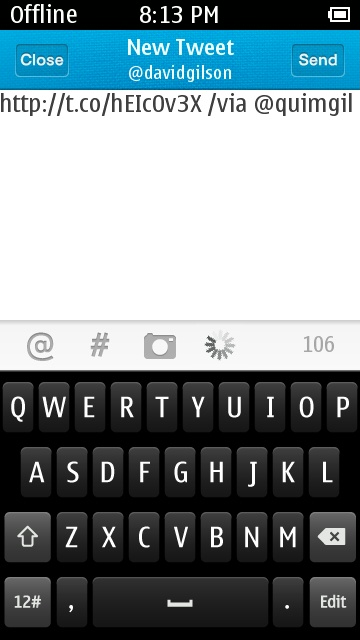 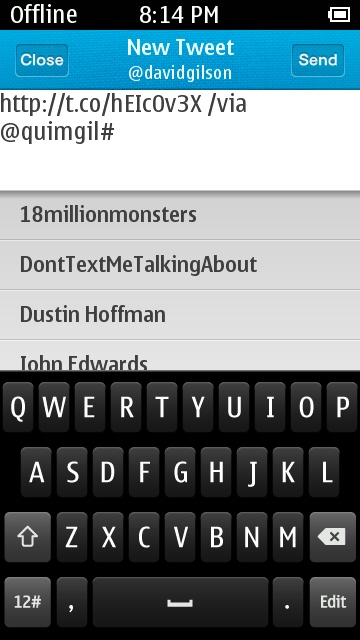 There are a number of helpful auto-text features: all URLs are shortened by the t.co service; typing the @ symbol launches a list of who you follow, to save you typing a whole name; and typing the # symbol brings up a list of trending topics. Tapping the camera icon gives you the option to upload an image, either by taking an in-situ image with the camera or picked from the Gallery application. All images are uploaded to Twitter’s photo hosting service, on pic.twitter.com – there’s no option to use an alternative service, not even the original Twitpic server. When adding an image, the on-screen keyboard is deactivated and the only way to bring it back is to tap the camera icon again. This is not intuitive and might lead some to think there is a bug if they tap in the text field, expecting the keyboard to appear, and nothing happens. 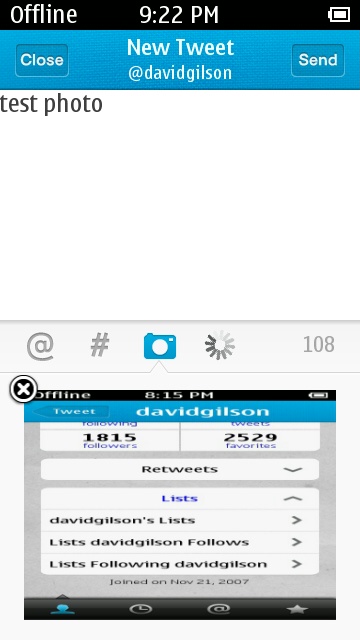 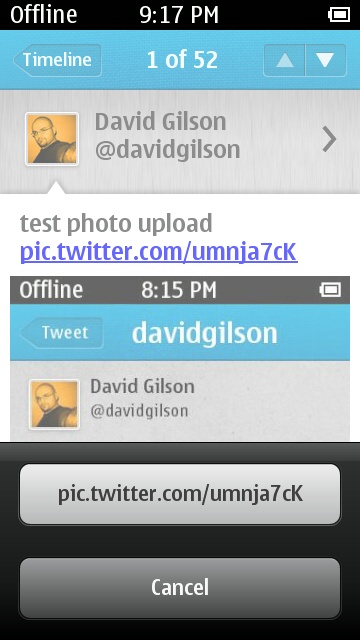 If you’re a casual Twitter user and want to move beyond the limitations of Nokia Social, then Tweeties is a good alternative – especially if you think Gravity is too expensive. I have a reservation with Tweeties’ performance though, as downloading tweets can sometimes take an unfeasibly long time. Still, if you’ve used the official Twitter client on other devices, you’ll find Tweeties very easy to use. Similarly, if you’re planning to move away from Symbian, then Tweeties will prepare you for the official Twitter client.

Tweeties is available in the Nokia Store. It normally costs £3.00, but it is currently on a Christmas promotion for £1.50. There is also Tweeties Free, which is ad-supported but lacks the ability to write tweets.