Once before, I complained about something heinously wrong in the Nokia Store and... it got fixed, the next day. I'm writing this missive in the hope that the same guys who work at Nokia are still there... and still reading the site. You see, I've been trying to download a number of games for the 808 and N8 now for two weeks. I've tried several times for each device, every other day and have hit a brick wall every time. And these are commercial games, for which AAS has paid - and we still can't download them. There's clearly something horribly wrong at the server end if a 17MB file can't be served up more than one time in a thousand. See below for screen proof and more pleading.... 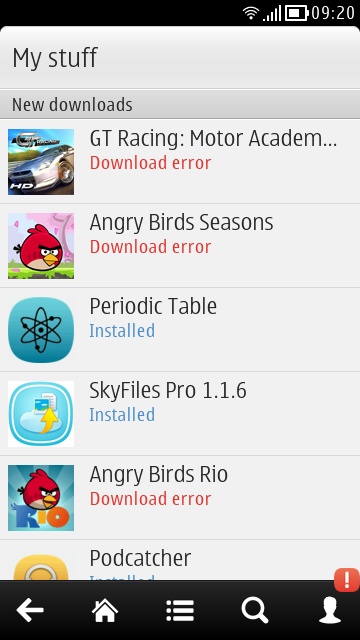 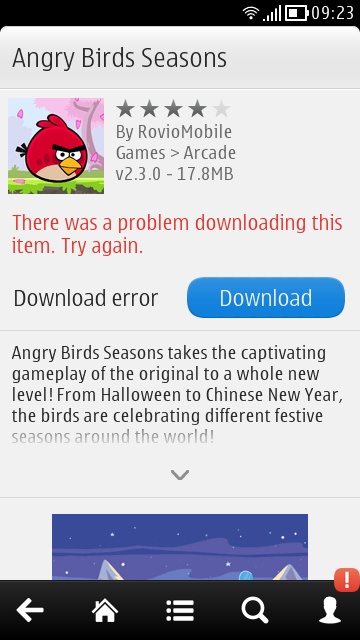 The left screenshot tells a sorry story. This is the Nokia Store on my N8, shot after a two week period of trying to install three games. Note that small applications, a Megabyte or so, download and install fine, but anything vaguely large (e.g. a decent game) fails every time. And I'm fed up. What must a normal user feel like at this point? I reckon I've now tried downloading Angry Birds Rio about 30 times without a single success.

What seems to be happening is that the download is failing at the server end - some kind of transmission handshake breakdown - when handling large files. And it's surely a bug, since this was far more reliable a few months ago.

As with the previous Nokia Store woes, this is undoubtedly a case of the diminished attention being given within Nokia to Symbian-related resources - but I'm still hoping that the problem is diagnosed and fixed promptly - after all, a life without Angry Birds is not worth living, surely?(!)

Comments welcome if you've also had these errors for longer downloads from the Store...